Although Tezos (XTZ) has showcased tremendous progress over the year, having gained 115% against USD and 90.6% when opposed to Bitcoin, its price action seems to have stalled near the resistance area at $3 that has proven impregnable for more than four months. Tezos was one of the most attractive altcoins for the period of six weeks after the notorious market crash in March, mainly because it displayed consistent gains that amounted to 135%.

However, once the price had hit the wall at $3, it totally lost the upside momentum and went on ranging in the corridor between the said resistance and the support at $2.5, thus providing abundant opportunities for those who are skilled in range trading.

But while Tezos has trouble dealing with the bearish pressure, the larger part of cryptocurrency market participants have already jumped on the bullish train that travels uphill, and even reached the phase of the secondary uptrend. XTZ has been passive in that regard, but this coin undoubtedly bears significant potential, both in terms of fundamentals and price action.

It appears that the large players are still in the process of position obtainment before the ultimate breakthrough of resistance, which is evident from a few recent instances of stop-loss hunting when the price had briefly descended to $2.19 only to explode to $3.34 and then retreat inside the established channel. 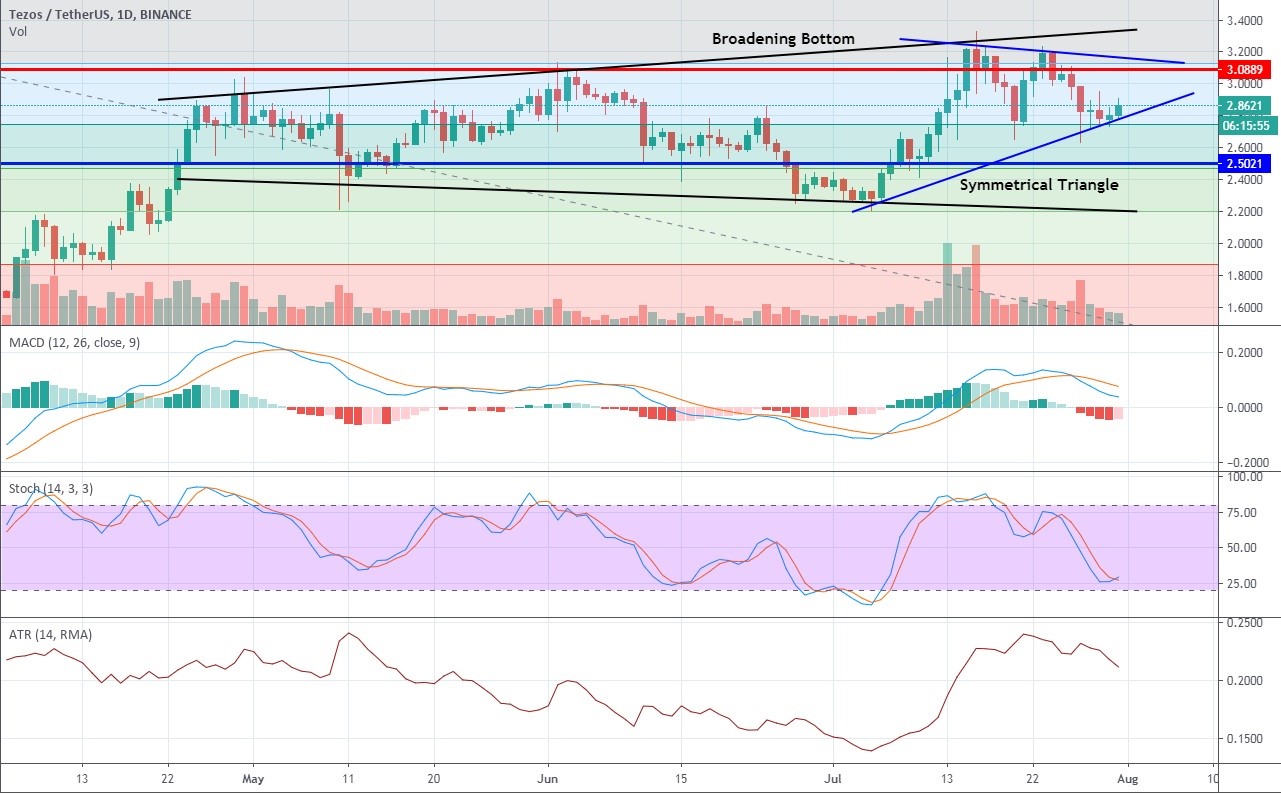 It is interesting to see how the price action respects the Fibonacci retracement levels as it continuously employs them as support/resistance areas. Presently, the support stands at $2.75, although XTZ is still incapable to fully breach the resistance that converges with the 0.78 Fibo retracement. However, we see that the latest instances of stop-loss hunting have actually pushed the price towards forming the broadening bottom formation that is considered bullish, although it works best as a reversal pattern.

But despite acting somewhat inertly, XTZ is still plodding to the upside bit by bit, which could hint at the crowd’s overall bullish inclination. It appears that Tezos has taken the opposing stance with regard to the rest of the market, so the expected rally is likely to take place when BTC and the bullish altcoins enter the correction mode.

The Average True Range indicator is sloping downward, which signifies the anticipated decrease of volatility, hence the modesty of potential gains.

We predict that Tezos will remain moderately bullish with the possibility of a breakout towards $3.5 - $4 after the confirmed ascension above $3 and the breach of a symmetrical triangle, which is a continuation pattern. But stay aware of the possibility of another instance of stop-loss hunting, so make sure to secure your position accordingly.