In the first months of 2020, when traders have been cherishing their hopes for the altseason, Tezos was one of the most noticeable cryptocurrency, mainly because it had increased in price by 140% and became one of the top gainers of that period. Then came March, which brought the global COVID-19 pandemic - that is when things went sour for the cryptocurrency market in general, and Tezos in particular. Since then, XTZ hasn’t been its prior self as it had apparently lost a bit of its mojo, and buyers’ trust along with it.

Nothing but ranging at the moment

It didn’t take long for XTZ to get out of an absolute bearish zone, which laid between $1.3 and $1.7, or the 0 and 0.236 levels of Fibonacci retracement. But even back then, the bulls weren’t particularly active in this market or overly keen to immediately take the price up after the crash. It was also when the 14-period RSI dipped its toes in the over-sold waters for the first time in many months.

Since then, XTZ’s path to the upside was long and tedious as the relatively large bullish momentums were instantly extinguished by the bears who pressured the price down, although their efforts weren’t sufficient enough to disrupt the uphill hike. The only time when Tezos did display an assertive strive to the upside was in the last week of May, when the price went through two Fibo levels (0.5 and 0.618) in one go and even penetrated the first major resistance level at $2.51, which, coincidently, was the level from which the market jumped into abyss in the middle of March. 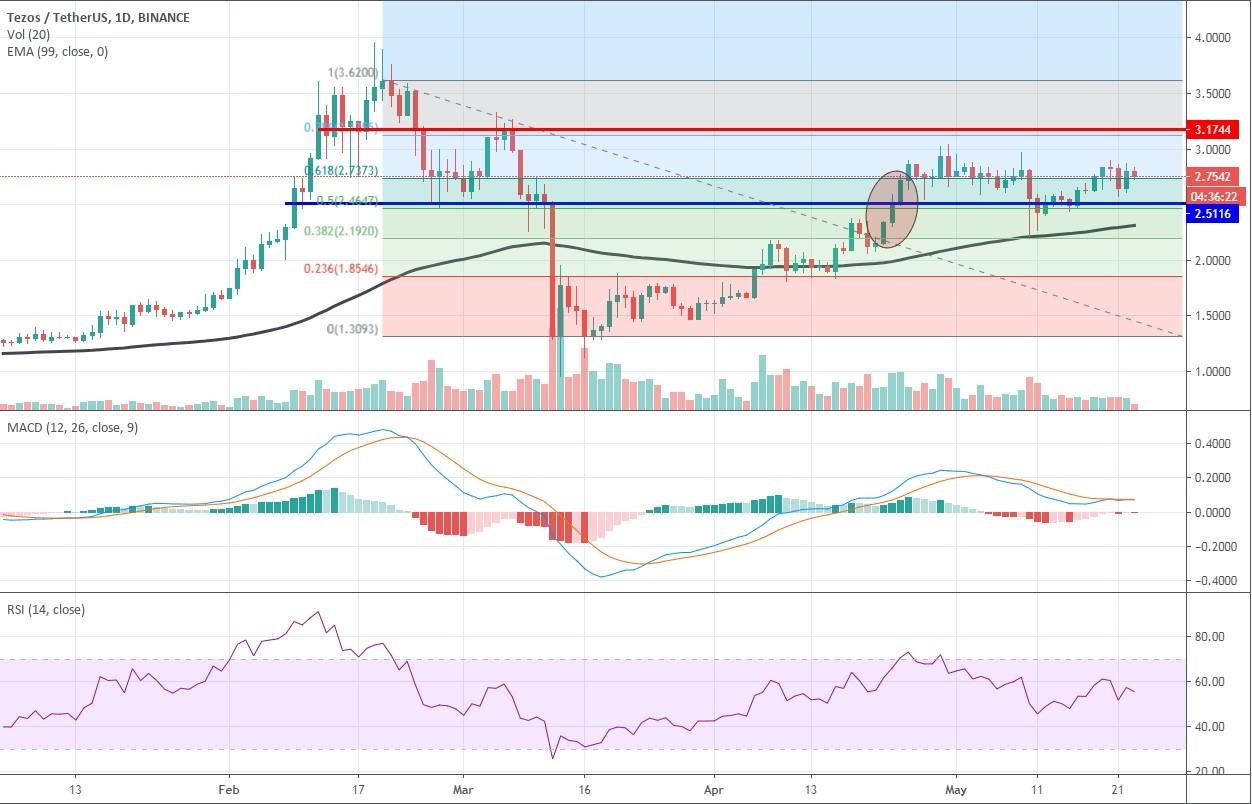 XTZ has even put up the three white soldiers pattern, which, in turn, stemmed from the morning star formation. However, these signals didn’t work out as the price halted at 0.619 on Fibo and went into a range between $3 - $2.5 and even retested the 99-period EMA that acts as a strong support since the first week of April.

The next big price targets that lay ahead of Tezos are $3.17 and $3.62, both of which are situated at the peak of the previous bull rally. The issue with these resistance levels constitute in the fact that they converge with the corresponding Fibo levels: 0.768 and 1, which has always made the breakage of the resistance much more complicated. We presume that even if the bulls find enough fuel to take XTZ to $3.17, this initiative would be fiercely rejected. But we have serious doubts that the buyers are willing to push the price substantially higher at this point. The volume profile shows that the buying power, along with the overall volume, has been steadily decreasing after Tezos went ranging.

Throughout the time after the crash, MACD hasn’t risen above 0.2, although it took an effort to find the way from the negative 0.4 and out of the deep bearish zone. Currently, the indicator is in the neutral area between 0 and 0.2, which raises the probability of XTZ staying in the range between $2.5 and $3.17 during the next week. The ranging scenario for Tezos is also supported by the 14-period RSI, which hasn’t really left the neutral corridor between 30 and 70 since March.

This leads us to believe that XTZ won’t present any interest for swing and positional traders, as there are no indications of the volatile price action. Right now, XTZ offers a good field for scalping and range-bound trading.