Tezos is inarguably one of the most potent gainers in the cryptocurrency market, especially among the top coins. Despite the stringent correction after the short-term bull rally that occurred in January - February, and the subsequent market crash, XTZ maintained the positive yearly ROI of 112% against USD and 53% against Bitcoin.

Over the past month, the value of Tezos dropped by 32% due to the vicious meltdown, but the coin has already completely recovered from that loss and even went on a bull run on the back of a very significant buying volume.

Needless to say that XTZ is definitely a cryptocurrency that should find a place in every trader’s or investor’s portfolio. But those who don’t own that coin should carefully consider the right moment when to buy this coin because the current bullish situation in the market could be not a trend reversal, as many online crypto experts have been preaching lately, but a usual bull trap, after which the prices would descend to the previous support levels, and even break it.

XTZ is driving up actively, but caution should be exercised

Those who were industrious enough to buy Tezos at $0.95, which constituted a very bottom of the current market cycle, must have felt rejoiced when the price had made an impressive 25% sprint to the upside in the last three days, thus allowing them to lock a respectable 52% profit.

But, certainly, not all traders are so risky and daring - the majority of them bought back XTZ after the first and the second retracement, as confirmed by the volume on the daily time frame. 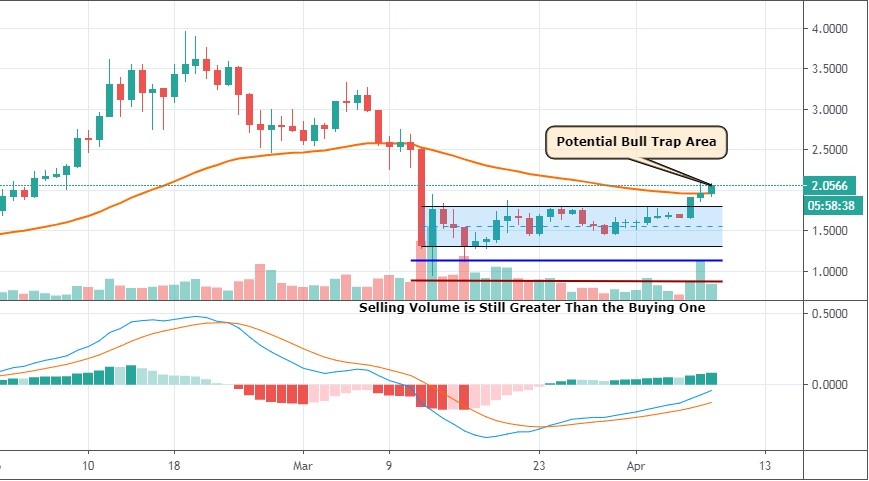 However, those who took the bullish position on Tezos between $1.28 and $1.68 aren’t in a rush to sell as the 10th cryptocurrency has been maintaining the bull run for three days in a row. So much so, that the price has even climbed on top of the 50-period EMA, and is now making an effort to turn it into support.

This price surge has been substantiated, in no small way, by the optimism on the conventional stock market, which, in its turn, was dictated by the slowdown of the COVID-19 pandemic and the lowering of the infected/death rates. However, all this seems like grasping at a straw while swimming in a storm that has calmed down for a bit. There’s no need for tons of technical analysis to understand that this price surge could be short-lived as it is based purely on the impermanent optimism that could fade away faster than it emerged, along with all the gains that Tezos has made in the past few days.

Moreover, there is a very strong suspicion that the ongoing price surge could be a part of grand price manipulation at the hand of the whales for the purpose of extracting the accumulated coins from retail traders who have the proclivity to greed and panic.

First of all, the overall market sentiment is still characterized as extremely fearful, which means that a small poke could send the price tumbling by tens of percent.

Secondly, even though Tezos is a solid cryptocurrency with bright prospects, its present supply on the market outweighs the demand, which is evident from the trading volume displayed on the daily chart. The volume associated with this rally is lower than the selling volume from the past three weeks that hints at the possibility of artificial demand created to lure traders into the bull trap. Therefore, it would be impractical to buy XTZ right now since this price level could well be the top that would be followed by the protracted price slump.