Since the outbreak of coronavirus, which exerted a devastating impact on the global financial system and, by association, the cryptocurrency market, the price behavior of nearly all representatives of cryptographic money has been unstable, so say the least, crashing all expectations of a prolonged bull market, which traders had been nurturing for the past several months.

XTZ got knocked down but is getting back on its feet

Tezos didn’t escape the correction as its seemingly smooth and impeccable uptrend architecture has been thrown in disarray, resulting in a 38% price drop after the 10th cryptocurrency had hit the ceiling at $3.9 on February 19. Nevertheless, the overall gains profile of XTZ remains hugely positive as the coin was appreciated by 67% in a month and 12% over the course of the past seven days. 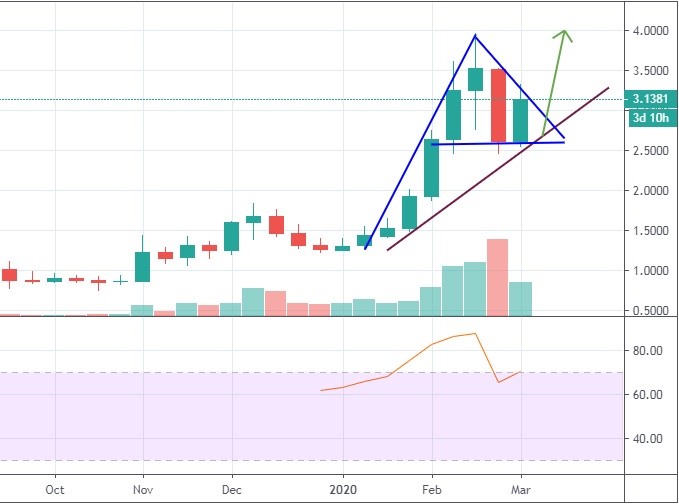 The situation on the weekly time frame appears to be generally promising for Tezos as the price has established firm support at $2.6 -it has been closing at this level for three weeks. Should that level hold for another week, we could say with a bit more certainty that XTZ has found the bottom of the correction, so traders should be considering this region as a place to make an entry into a long position.

Moreover, the retention of $2.6 as support would mean that Tezos will have made a new higher low on the weekly, thus negating the prognoses regarding the reversal, for the time being.

We also see that XTZ has formed an accurate bullish flag that appears to be showing intentions for breaking to the upside - that is, of course, if the mentioned support holds.

However, given that the RSI is crawling up to the overbought area again, traders shouldn’t disregard the possibility of a drop below the support line, which would look more like a bull trap than a further pullback, though we shouldn’t take the scenario of a larger price decline off the scales. In this particular situation, traders should be extremely cautious with the tightness of their stop-losses, because getting trapped by the bulls could throw them out of the market for a prolonged period of time. 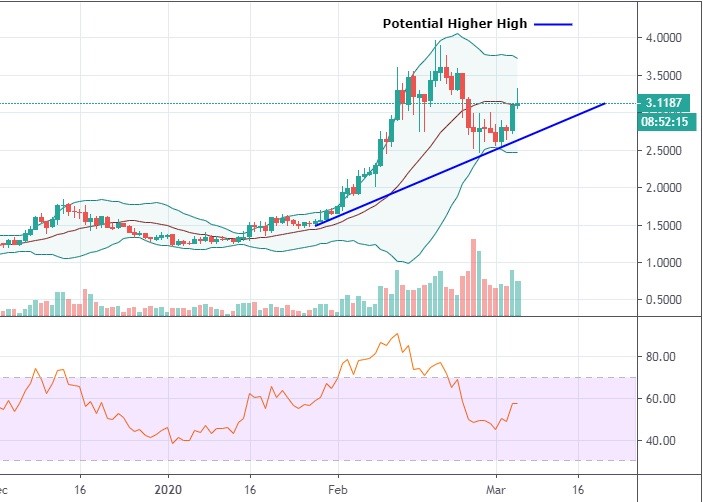 When it comes to the daily time frame, Tezos also appears to be quite healthy, again, if we consider $2.6 to be the higher low, which is highly likely to be the case since the price has already begun to make a rebound to the middle line of Bollinger Bands, from which it could make a minor retracement to $2.75 before attempting to make a run to the new higher high that should be above $4. The RSI here is still in the neutral area just below 60, which means that Tezos has enough room to test the resistance at or above $4 within the next week. 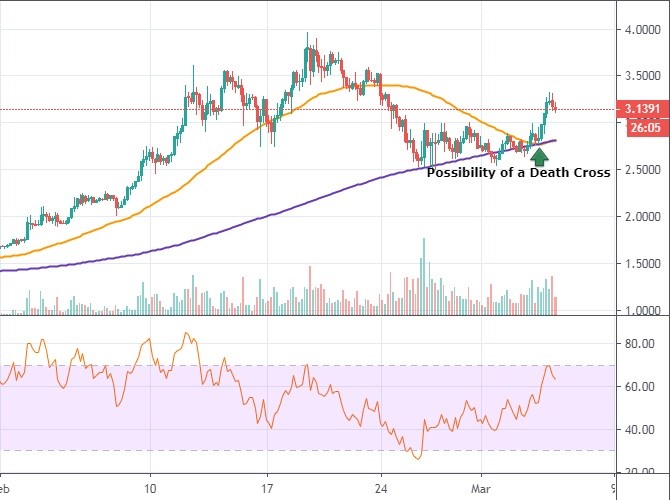 The 4-hour time frame is the one that traders should be paying close attention to, because the price shows the possibility of an emergence of death cross as the fast MA has approached the slow one dangerously close, though the actual crossing hasn’t happened yet. Given the XTZ is moving tangentially to the 200MA, a death cross could translate to a significant price drop, though it might be a part of a bull trap scenario. Therefore, when it comes to Tezos, traders must be very careful with their stop-losses and look for another pullback to go long.