Tezos (XTZ) is one of the projects that have managed to maintain their popularity in the last several years, even though it never managed to reach the top 10 list of largest coins by market cap. Even so, the project never went far from the list of the largest coins, as it managed to remain among the top 20 for two years now.

The project is a development platform, similar to Ethereum EOS, and TRON. At the time of writing, it is also the only project among the top 20 largest cryptos whose price is trading in the green. Its price is not very high, and certainly nowhere near its ATH. But, it sits comfortably at $1.22, with a 1.43% increase in the last 24 hours, while all larger projects experienced losses between 1% and 4% during the same period.

But, where will Tezos go in the future? To determine that, we must first take a look at its journey so far.

Tezos is not a very old coin. It was launched back in late 2017, in the early days of October. It managed to catch the bullish wave only two months after launch, and reach its ATH at $10.56. This was quite an achievement, since its price rose to these heights from only $1.5.

However, the market crash that followed knocked it back down to $3, where the coin remained until July 2018. For a time, this level was its largest support, while its largest resistance sat at $6. XTZ spent the first six months of 2018 fluctuating between these two levels, never actually succeeding in breaching the resistance, but also never breaking the support fully. 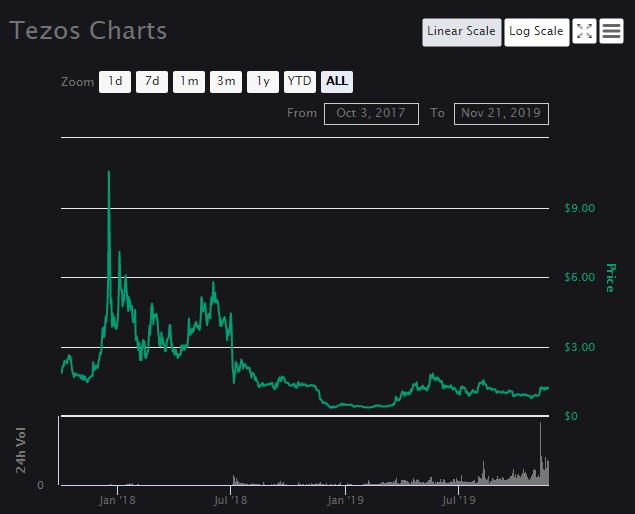 Unfortunately for the project, this changed in the opening days of July, when it broke the support and dropped down to its starting price of $1.42. While it originally seemed like this level will be its bottom and that the coin will not go below its price at the time of launch, this happened as well, only a few months later.

Tezos broke this support as well in mid-November 2018, when BCH hard fork brought hash wars to the crypto market, and caused a second market crash. On the occasion, XTZ dropped to its real bottom at $0.40, where it remained for months. It finally started climbing up in March 2019, after the bear market was replaced by a series of smaller bull runs.

Its price reacted even before Bitcoin's, and while the coin did not climb very high, it still managed to undo the November crash. Even so, it did not move very far from its launch price to this day, as mentioned above.

Where will Tezos go from here?

Young as it is, Tezos does not offer a lot of information about its price that would reveal certain patterns. It mostly just follows the market sentiment, going up or down, depending on how the rest of the market performs.

It has the will to grow, but it seems that it only grows as part of the collective, not by itself. This is why its current performance is so curious, as XTZ sees growth while all other coins trade in the red. In any event, the XTZ future is likely tied to other coins, and it will perform in a similar fashion. One thing that seems certain is that the coin will not drop below its current support at $1.2, as any drops below this level seems to require a massive blow to the entire crypto market.