The cryptocurrency market seems to be struggling with large price drops yet again, with EOS being among the fastest-dropping coins among the top-ten cryptos. At the time of writing, the coin's price sits at $2.36, after going down by 7.41% in the last 24 hours.

EOS currently sits as the 7th largest coin, with a market cap of $2.2 billion and a trading volume that is only slightly lower, sitting at $2.1 billion. Another thing to note is that the coin is dangerously close to its bottom, which might mean one of two things — its nosedive is either about to get interrupted, or its bottom might be breached for the first time in two years.

As EOS supporters likely know, EOS is a relatively young coin that was launched only a few months before the massive price surge of 2017. After its launch in July of that year, EOS' price quickly started sinking, until it dropped to $0.55. Then, when the surge truly started in mid-November, EOS joined in, growing to $16.23 in early January 2018.

However, this was not the coin's ATH. After it reached this level, it started crashing, like every other cryptocurrency at that time. But, when the crypto winter took a small break in April/May 2018, many believed that it had actually ended. EOS started surging, partially due to the brief recovery, and partially because its blockchain was in the works, and the community expected it to see launch soon, which would have likely allowed the coin to surge yet again.

During this period, EOS hit a new ATH of $21.54, which is when the bears had returned, and the coin started dropping yet again, this time going all the way down to $1.83, which was the price that it had a year ago, on December 15th. It was its lowest point in 2018, although it was followed by a gradual climb back up throughout 2019.

With Bitcoin leading the market up between the months of April and mid-June, EOS followed. It did not grow as gradually as some other altcoins. Its chart clearly shows that the coin's price surged in waves. 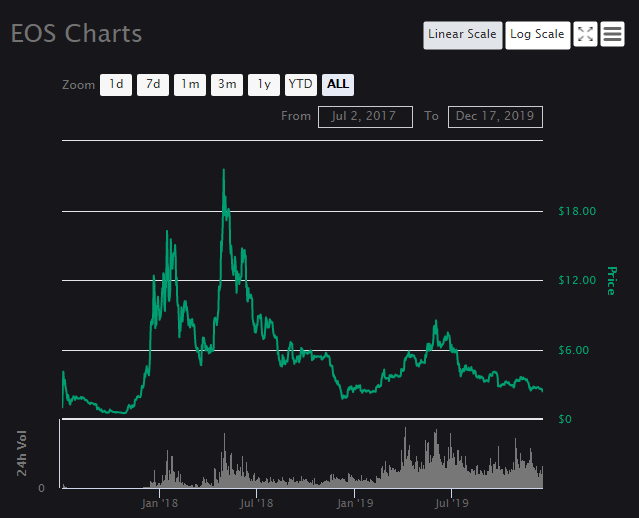 EOS reached its 2019 peak on June 1st, when it hit $8.51. After that, it experienced a minor correction, but it attempted to bounce back once again just before Bitcoin's own climb ended. As soon as BTC started falling, the altcoins followed, and EOS was one of them.

What will happen to EOS in the future?

Its sharpest drop led it to $4.05, which is the price it reached about a month later, on July 20th. After that, the coin's price kept declining more steadily, until it brought it to $2.36, which is where it sits right now.

If this nosedive continues, EOS will soon reach its lowest point from 2018 — $1.83 — and if it doesn't stop there, it will officially hit the lowest it has been in the last two years.

EOS: the Picture Gets Clearer