It appears that the initial panic that had engulfed all markets without exception has passed being replaced by the relative stability, or at least a lack of jaw-dropping volatility that we saw in mid-March. This period of relative quietness has also offered an opportunity to take a breather, analyze the bigger picture and assess the macro levels that began forming on cryptocurrency markets - EOS in particular - after this cryptocurrency crashed through all possible support levels to arrive at the three-year low at $1.35.

Market collapse as a part of a downtrend

Nevertheless, once the price has bounced off the bottom - or an interim bottom, if the situation on the global markets keeps worsening - and made a partial recovery, traders must have realized that the notorious downfall turned out to be just another lower low of a downtrend that stems from the massive bull rally of 2019. 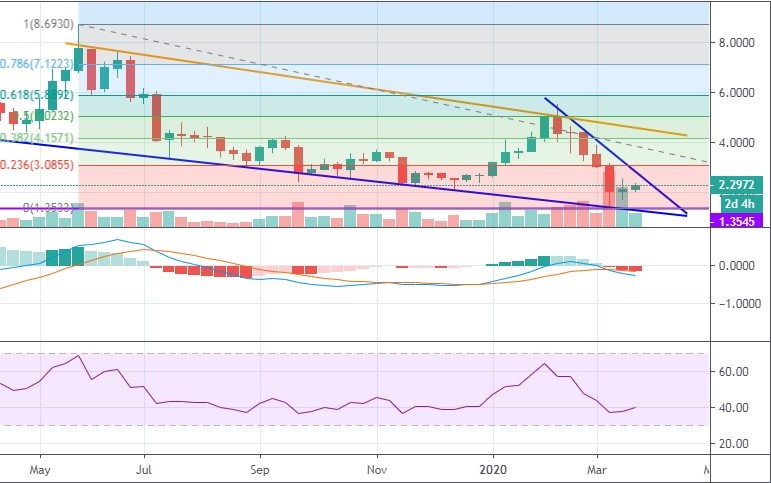 It is evident from this weekly chart that the bottom at $1.35 turned out to be an accurate lower low that falls perfectly in line with the macro downtrend and should have been anticipated by the more seasoned traders.

Certainly, we shouldn't defy such factors and looming global recession, stimulated by the ravaging coronavirus, but the fact remains that we have been trading in the context of the bear market of 2018 all along, and that the crypto winter is yet to pass.

In any case, this situation should teach traders not to be deluded by the occasional bull rallies.

On the other hand, those coins, including EOS, which haven't established the all-time lows - EOS's happen to occur in 2017 at $0.48 - maintained the overall trend structure and proved their resilience even in such traumatic times like these. The crash could also be perceived as a great screener for the most reliable cryptocurrencies, towards which traders should establish a bullish stance in the long run. Needless to say that EOS has so far deserved a place among such cryptographic assets.

But what of the upcoming price action of EOS? As we can see on the chart, the price is approaching the upper line of the strong pattern that is the descending triangle, so traders should anticipate either its breach to the upside or the continuation of a squeeze to the bottom corner that could even take the price to $1.35 again. In any case, that would constitute a healthy movement by EOS that lies within the framework of the ongoing downtrend.

If the move to the upside does take place, it is probably going to reach 0.236 of Fibonacci that coincides with the level of $3. This way, EOS would fully recover from the losses inflicted by the market crash, but the following retracement is to be expected. Therefore, $3 is a crucial level that has to be watched closely in the future.

However, the probability of EOS going to the downside is much higher as the global economy is only entering the recession that would drag the cryptocurrency market along to the deeper depths. But in the current circumstances, it ought to be perceived as normality. Such vital indicators as MACD and RSI are both bearish, which means that those who want to lock their profits at this stage, should pay close attention to stop-losses.