An almost instantaneous market crash at the beginning of September has had a devastating effect on the price action of EOS that had been gearing up to break the double-resistance at $3.807 and $4.06 to the upside.  The price was stopped dead in its tracks at $3.87, followed by a mean reversion to $2.3, hence going back to the March price levels.

From rallying to getting crammed into the range

After spending months clinging to the support at $2.3, EOS had put up a strong bull rally that should have gone above $4, since it started from the Bollinger Bands squeeze that always results in the period of high volatility, but then the buyers have stepped in and canceled that scenario. 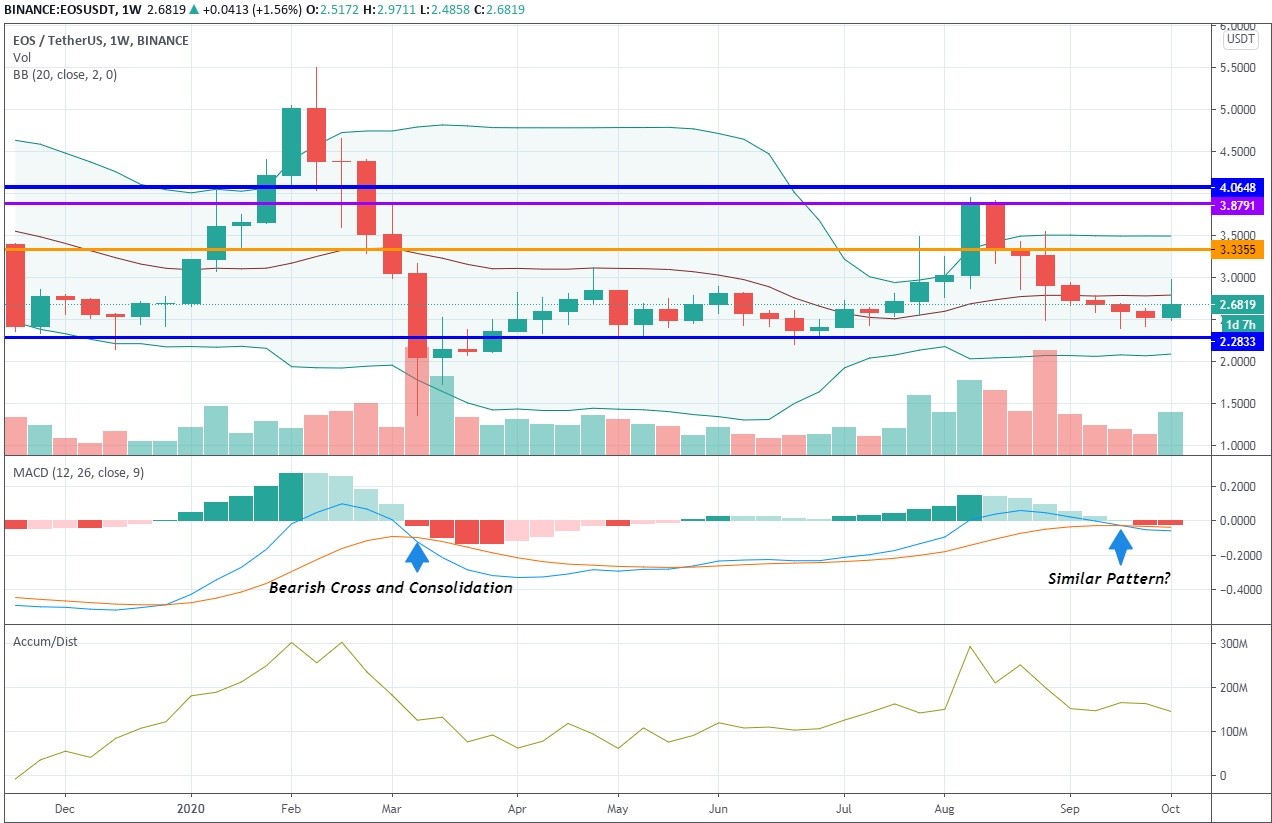 Consequently, EOS made the V-shaped reversal to the downside and traveled back to $2.3, which, naturally, had a negative impact on its performance profile because last month, the altcoin went red by 3% against USD, 12.33% in the pair with BTC, and 8.3% against ETH, thus further worsening the showings on the yearly scale: 37.5% to the downside in the Bitcoin market and the negative 57.8% in the Ethereum one.

EOS is now sitting at the 14th spot in global ranks, priced at $2.68 after the buyers have pushed the price by 1.7% in the past 24 hours. At the same time, the average trading volume from the past 30 days was relatively stable, having spiked from the average of $1,4 billion per day to $5,6 billion on several occasions. Therefore, the EOS market of late hasn’t had any radical shifts in supply and demand, which is characteristic of the consolidation period.

However, if the current bullish candle finishes the week with engulfing the preceding two bearish candles, we could be looking at that commencement of the 40% move to the upside, though it would still take place within the confines of the broad consolidation channel.

Perhaps the latest deal with Google Cloud, which saw the tech giant becoming the block producer on the EOS blockchain, might fuel a slightly more aggressive move to the upside, but on the macro level, the altcoin is bound for consolidation.