The notorious coronavirus has not only taken thousands of lives across the world but also had a devastating effect on the global economy in general, and the cryptocurrency industry in particular. So much so that the jubilation over what seemed to be like the beginning of the Bitcoin bull market, along with the altseason, is beginning to die down as the market is tanking across the board, eating up all precious gains that were made over the past two months.

For instance, the overall cryptocurrency market capitalization decreased by 9.3% in the last 24 hours alone, while the percentage of “losers” stays above 80% day after day for nearly a week now.

EOS hasn’t become an exception in that regard as the 8th cryptocurrency has already devalued by 24% during the last 7 days, and as many as 15,4% in the last 24 hours. So the question now is not whether EOS, or any other cryptocurrency for that matter, would revert back to the uptrend, but rather how deep it would fall before showing any signs of recovery whatsoever?

The possible end of the bull rally

They say that nothing lasts forever, and this notion fully applies to the cryptocurrency market, which is apparently becoming more and more sensitive to global turmoil. And just like that, the panic over the spread of coronavirus - regardless of whether it’s substantiated or not - has put EOS and the rest of the cryptocurrencies into the freefall, having virtually canceled the expectations regarding the continuation of the altseason. 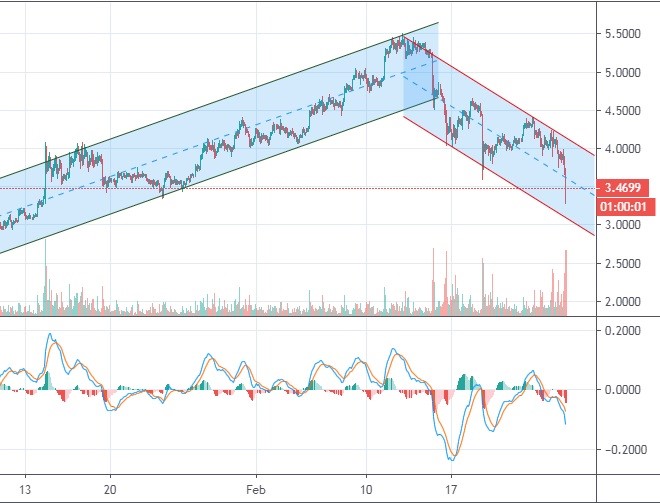 Starting from a smaller time frame, EOS has clearly had its uptrend architecture shattered to pieces so abruptly that reluctant traders didn’t have a chance to figure out what to do. Nevertheless, the price of EOS has reverted from moving within the confines of the ascending channel, with its higher lows, to what appears to be a fledgling downtrend or at least a very steep correction. After briefly testing the resistance at $5.5 and consolidating for a little while, EOS went straight to making lower highs, breaching one support level after the other: first came $4.5, followed by $4, and now EOS is falling past $3.5 on a back of an immensely high selling volume.

At this point, MACD is moving further down south, away from the zero-line, accompanied by steadily growing red histograms. Therefore, the bears are tightening their grip on the market. The 14-period RSI, however, is deep in the oversold area - even below 20 - but, judging from how things stand right now, it could stay there for a while. 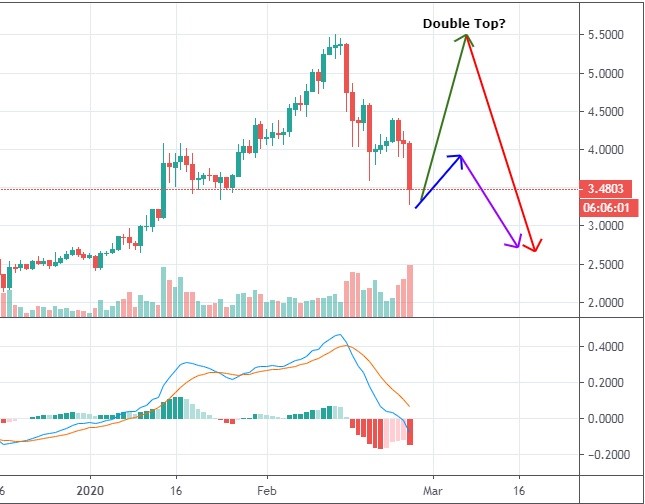 If the panic on the markets won’t die down in the next few days, EOS would officially enter a full-blown downtrend, which could eliminate nearly all of its gains (scenario 1: blue and purple lines). Even if the market makes a swift recovery, traders still should keep in mind the possibility of the emergence of the double top pattern that would eventually lead to a downtrend. The probability of an immediate continuation of the bull rally is diminishing with every passing day or even hour, so those traders who got trapped by the bears have literally no other option but to sit tight and wait until the storm blows itself out.