Contrary to other top and mid-ranked altcoins, EOS hasn’t been coping well with the consequences of the COVID-19 market collapse. The price of the 11th cryptocurrency did test the pre-crash level at $3.2 but was ultimately rejected to the long-standing support at $2.28, putting a halt on the aggressive bullish price action for the time being.

But presently, we see a small resurgence of the altcoin market that happens on the back of Bitcoin’s stagnation after the halving event and the sloping of BTC dominance. When it comes to EOS, the last seven days brought it the 12% appreciation of USD value and 10% in Bitcoin.

Nevertheless, it is a weak performance on the part of a highly-ranked cryptocurrency with the underlying disruptive technology. Our EOS price analysis will tell whether the price would snap out of the state of catatonia and initiate a notable upswing or would it keep on ranging and eventually drops below the crucial level of support

Pressured down by the multiple layers of resistance

The weekly EOS/USDT chart shows that the price has been lying nearly flat for two months which could mean the departure of buyers from this market or the accumulation of a large position by big players before an explosive move to the upside, presumably to $4, where they could start offloading it. 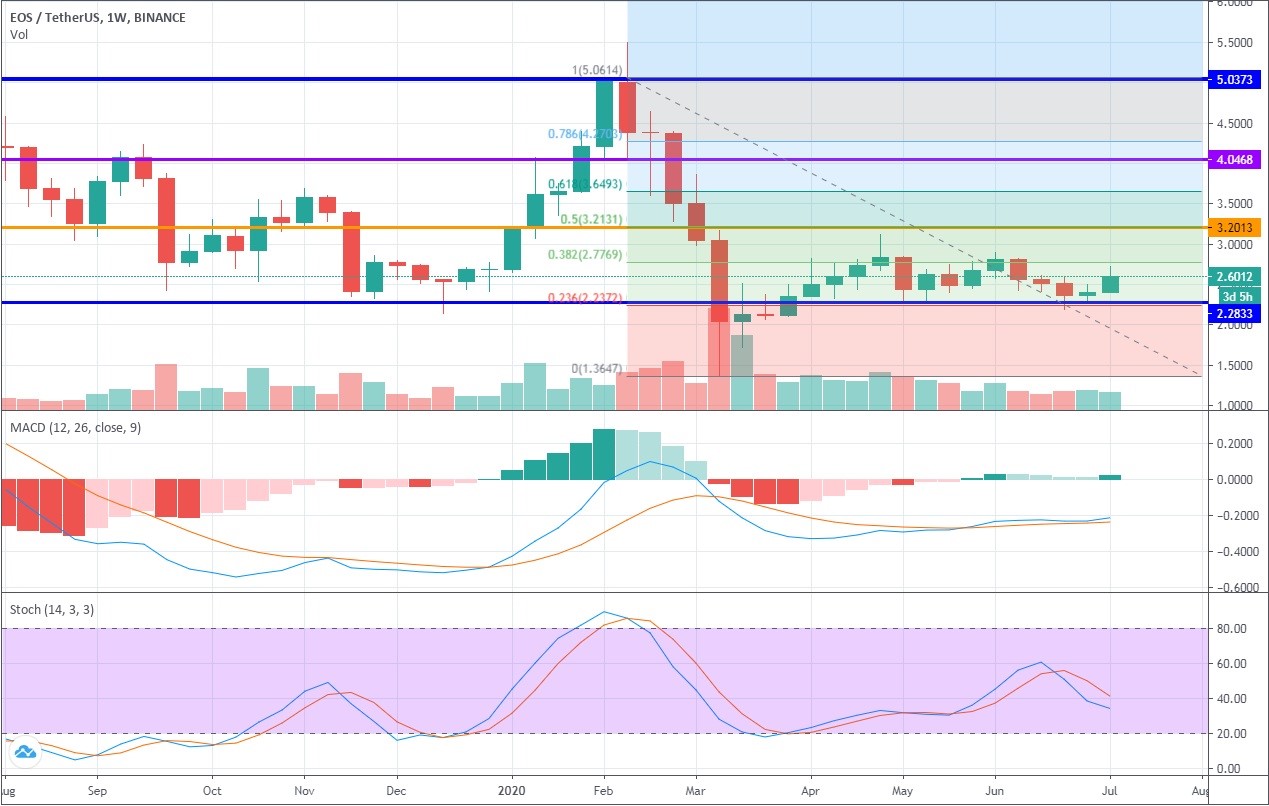 On the weekly time frame, we have designated four important price action level around which we based the further EOS price prediction:

All major indicators hint that EOS has no intention of leaving the comfortable range between $2.28 and $2.83 any time soon. MACD has been literally lying flat for nearly two months, displaying no will to move in any direction. RSI is also stuck in the neutral zone, floating between 40 and 50, hence confirming the overall dullness of the market. Stochastic, on the other hand, has been distinctively bearish, having made the corresponding crossover on June 22, right after the price had tested the support once again.

On this time frame, the price action over the two weeks won’t be any different from what traders saw recently. There is still a chance for a quick long play - enter at $2.6 and exit at $2.8 - but that all EOS has to offer at the moment. Those who would be willing to wait a little longer could set the price target near $3, as it is likely to constitute another point of rejection come the time of another bull run.