EOS is a cryptocurrency backed by a blockchain platform, created by Daniel Larimer and his team, that is tailor-made for the development of decentralized applications. Since the platform utilizes smart contracts, it was dubbed the “Ethereum Killer,” along with TRON, an ecosystem that is also focused on dApps, but primarily on the gaming and gambling industries.

The main technological advantage of EOS over Ethereum, at least before the introduction of Ethereum 2.0, lies in the much greater scalability, a prowess for handling around a million transactions per second, and the potential for carrying out money transfers at a no-fee basis. That is a fundamental value of EOS in a nutshell. Now, let’s see whether the price behavior of EOS corresponds with its alleged superiority over ETH and another adversary, TRX.

In 2019, EOS was one of those cryptocurrencies that had brought its holders and traders double-digit gains, 52.6% to be precise, against the US Dollar. The coin has even outperformed its rival Ethereum by 8%, though it had negative showings against Bitcoin at -36%.

EOS started the year rather boldly, having displayed the biggest gains of 46.33% at the peak of a recent rally, a far better result than that of its two competitors. 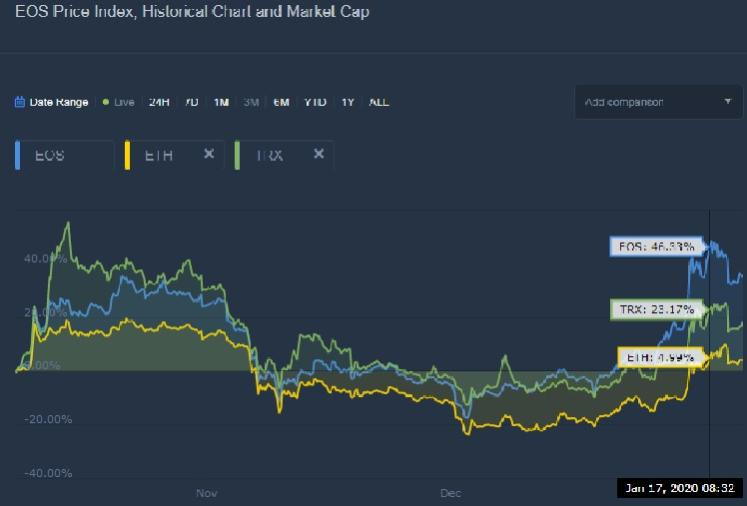 EOS outdid Ethereum and Tron over the course of the last three months, although further inflation of price is far from being guaranteed, especially when considering that EOS didn’t live up to its “Killer” title.

EOS’s last trip to the upside might be running its course on the back of negative news that surfaced within the last couple of days. It turns out that the total number of active users of EOS blockchain has been decreasing exponentially since last November. As of now, the dApp platform lost as many as 80% of active users over the said period of time, whereas the number of daily active decentralized applications shrunk by 30%.

It's most likely that this plunge has occurred due to the fact that two of its biggest dApps, namely Karma and EOSbet, have defected to the Wax blockchain. Without going further into detail, traders should take this fact into consideration when planning their strategy that involves EOS.

The present and the future of EOS

On the daily EOS/USDT chart, the 8th cryptocurrency has halted its bull rally, in unison with the rest of the market, which began after the coin exited the Bollinger Band squeeze to the upside. 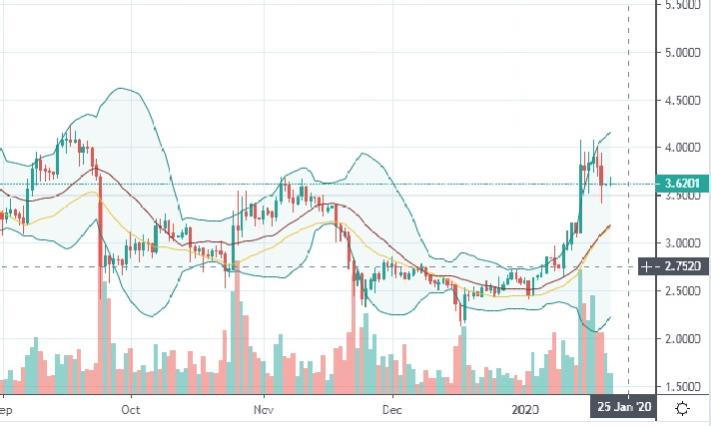 The move ended with EOS testing the resistance at $4, though being unable to penetrate it even at a massive bullish volume fully. Having exhausted its upside momentum, EOS is now retracing, with the support at $3 - $3,1 in its sight. 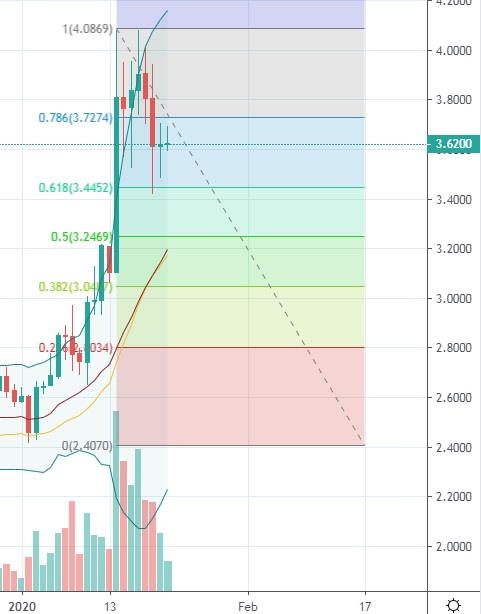 On the same time frame, the price has just breached the 0.786 Fibonacci retracement level and briefly tested the 0.618 line, which could become support at $3,45.

On the 4-hour chart, the price has dropped below the 50-day moving average, accompanied by the decreasing volume, which could be interpreted as a sign of further regression.

Taking into account the worsening fundamentals, we can conclude that in the next month, EOS could be carried higher only under the momentum of the entire market, but it won’t be able to stay at the current price level on its own.