The last market crash, caused by the COVID-19 pandemic, didn't spare a single cryptocurrency, even the top-ranked ones. Before the said meltdown, EOS was literally the talk of the town as the coin had made a 150% moon trip, instigated by the inverted head & shoulders pattern on the daily time frame, which placed it in the group of the most vigorous gainers in the market and the spearheads of the alleged altseason.

But that came to pass very quickly because the coronavirus wasn't sparing not only humans but also financial markets. After the fairytale rise from the 2019 lows at $2.17 to the peak at $5.38 in just 56 days, EOS crashed like a downed plane all the way to $1.37, thus annihilating all of gains from the previous year and becoming firmly trapped by the bears.

No way out of the bear cage

EOS played a cruel joke on traders before taking its huge nosedive: a week before the price climbed to the top of the local bull rally, on February 6 to be precise, the moving averages had formed a clear-cut golden cross, which is widely regarded as one of the most reliable bullish signals. Being baited by this pattern, many traders had gone long on EOS and evidently placed their stop-losses at around $4.3 - $4, judging from the enormous capitulation which the coin experienced after it tripped and fell from the top.

Obviously, many traders were reluctant to take their profits and that juncture because they thought of the initial price decline as a mere retracement, but when the things went sour, the non-foresighted ones got trapped by the bears for an indefinite period of time.

If we take a look at the all-time chart of EOS, it becomes crystal clear that the coin has 'bearish' stamped all over.

Ever since May 2019, EOS hasn't made a single higher high on the macro level and has not even tried to challenge the local high at $7.91. After the minor uptrend of 2019, the price has been simply sliding downhill within the confines of a textbook descending channel. That context dictates that our entire EOS price prediction will be based on the bearish context to which the coin is absolutely devoted at the moment. 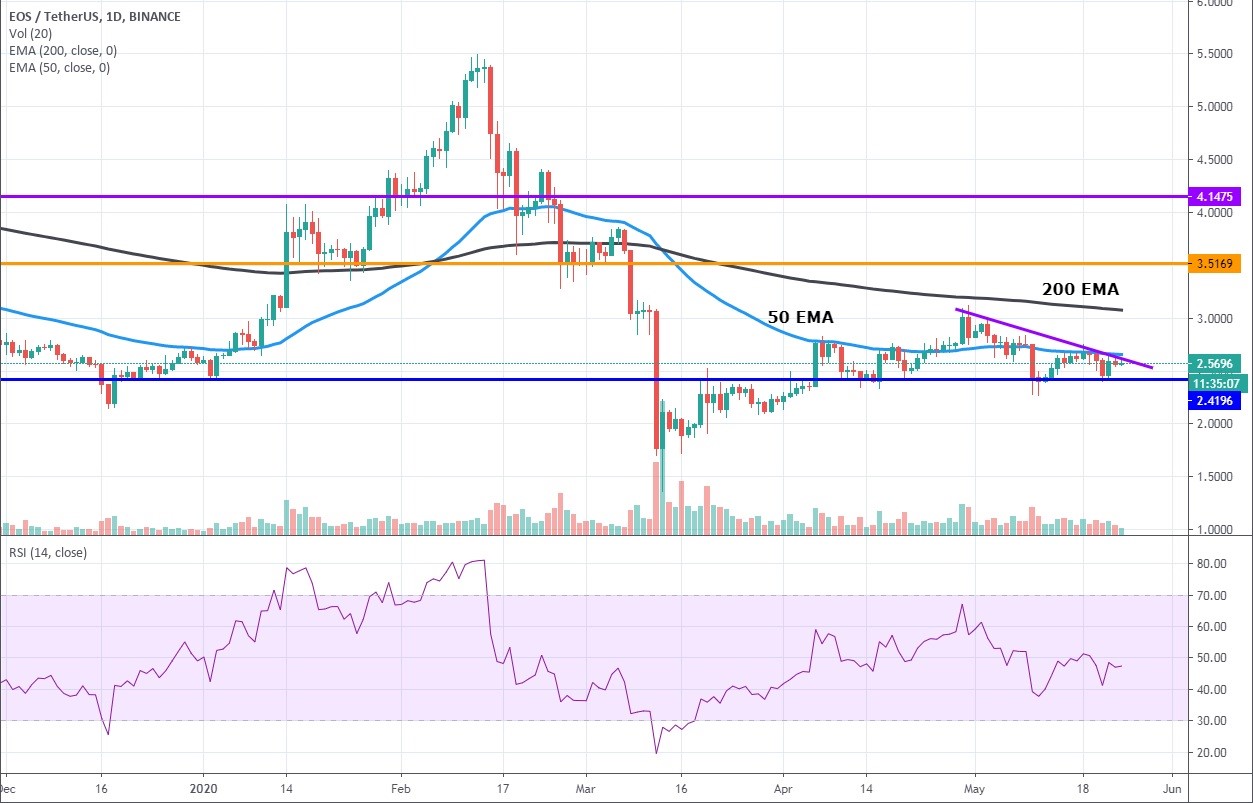 The first thing we would like to note is the death cross that emerged on the daily time frame just 35 days after the aforementioned golden cross. This time around, it seems that the pattern is going to play out correctly as the price action of EOS looks more like a deflated balloon. So much so that in ten weeks after the crash, the price couldn't even conquer the 50-period EMA, thus staying deeply below the 200 EMA, both of which are clearly indicating that the downtrend persists.

Throughout the same period of time, the RSI indicator stayed in the neutral zone, which shows that buyers have little interest in pushing EOS to the upside. The price has just been bouncing back and forth between $2.4 and 50 EMA, ranging tediously. In doing so, EOS formed a symmetrical triangle pattern that is most likely to resolve to the downside over the next week because, judging from the volume profile, the only things that bulls can count on is to keep the price of EOS above $2, with little hope of reaching the next price targets ($3.5 and $4.14) while the bears would make an effort to push the price below $2.