EOS is one of the coins with the strongest use cases within the crypto industry. It was often considered to be a potential "Ethereum Killer", thanks to its faster and cheaper blockchain, as well as pretty much all capabilities that Ethereum itself has to offer.

However, in terms of Price, EOS pretty much returned to the exact same place where it had started this year. Back in January 2019, the coin's price was at $2.50, and after climbing all the way up to $8.40, it simply kept dropping until it returned to its current $2.50. 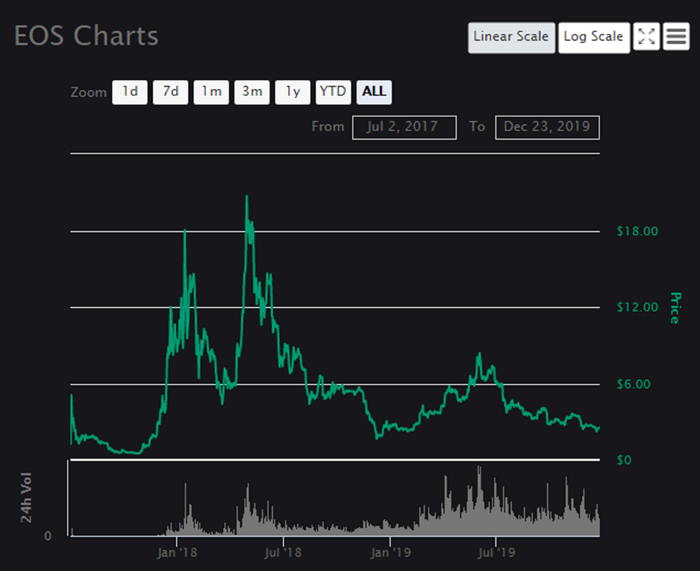 Of course, the coin is still one of the largest and most traded altcoins in the industry, with a market cap of $2.4 billion and a daily volume of $1.9 billion. And, considering the fact that it saw a 2% increase over the last 24 hours, it is likely that its volume, price, and market cap will continue to grow, at least for a little while longer.

EOS' past, present, and future

After this major surge in April/May 2018, it once again started dropping. At first, it seemed like its support at $12 might stop its fall, however, it broke after only a few weeks. Then, it crashed back down to $6, which many believed to be the coin's bottom. When it broke this support as well, it turned into a resistance, and the coin spent several months rather close to it, trying to breach it once more.

Unfortunately, those efforts ended during the second market crash of 2018, which took place in November of the same year. EOS finally hit its real bottom at $2.50.

Then, 2019 arrived, and the coin finally started growing. However, its chart indicates that its growth was not a result of its own efforts, but rather of the market sentiment. It grew only during bull runs, while it managed to keep some level of stability between them. It managed to breach the resistance at $6, and it reached its yearly high at $7.90. Unfortunately, in the second half of 2019, EOS, kept dropping lower and lower, until it finally returned to where it is right now — $2.50.

As for its future, EOS does seem to favor stability when left on its own, which is the course of action it took each time when the market saw a few days or even weeks of peace and quiet. The coin is impressionable, however, and it is not difficult to make it follow the current market trend. But, when the market doesn't react, neither does EOS. In other words, in the future, the coin's movements will likely depend on how the market itself performs.