Maker (MRK) can be considered as one of the most underappreciated cryptocurrencies not included in the Top 20 on CoinMarketCap. It is a solid coin through and through, starting from its fundamentals and going to the day-to-day price action. Together with Chainlink and EOS, Maker represents a group of altcoins that could see a significant price breakthrough over the next ten months.

The year of 2019 didn’t begin well for Maker as it dropped from the customary resistance level of $500 to $367 in a matter of months, reaching the support line that was characteristic of the entire 2018. But, as they say, the night is darkest before the sunrise, which is more than applicable to the case of Maker. Right after the February dip to $300s, MKR had entered the massive bullish phase, which took the coin from the bottom of the pit almost to its 2019 highs, on the first try. This run was followed by a short correction that lasted for about two weeks in March. After that, MRK had hit the ceiling at $775, which turned out to be its resistance level for the current year. 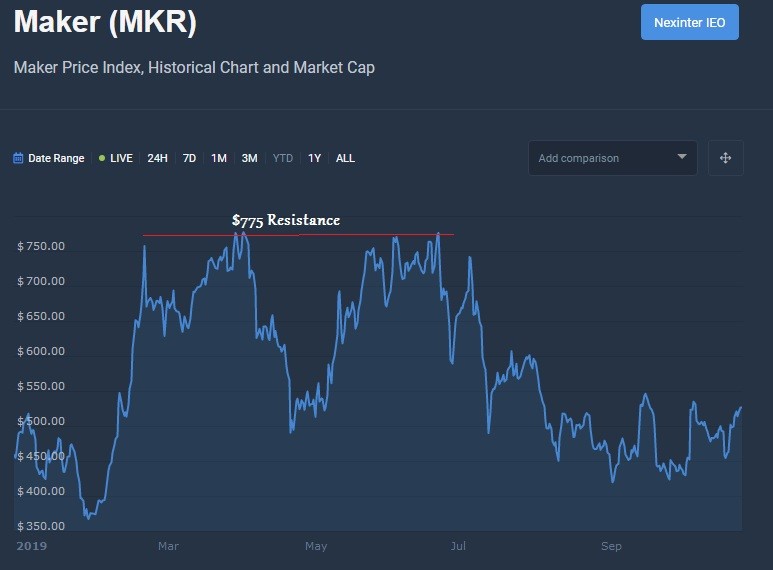 Following another brief correction that happened through May, Maker had been holding at its peak until mid-June, when it crashed abruptly below $300, in keeping with the general downfall on the cryptocurrency market that literally buried the hopes of optimists for the continuation of the bull run. After a short-term bounce to $600, Maker had cascaded down to $440 and continued to move in the $425 - $546 corridor from August till the present time.

Maker is generally perceived as a mild-to-high volatility coin, which is proved by its price action in October. 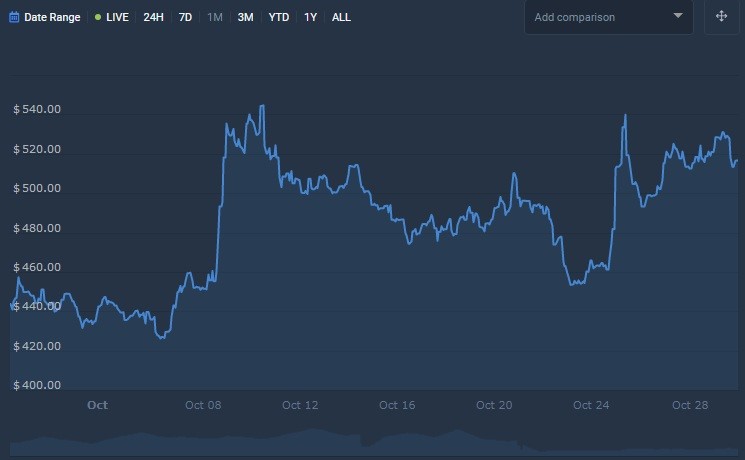 What’s good about Maker is that this cryptocurrency is characterized by strong upward impulses, followed by relatively mild, yet quite prolonged, correction phases, which provide traders with a chance to properly analyze the situation and make a weighted decision. Judging from the present chart, and MKR’s recent price history, we can assume that the coin will continue its movement within the confines of the designated corridor, thus decreasing from its current level of $523 (as of the time of writing) to around $430, where it will face a stiff resistance. The behavior of Maker during the remainder of the year will largely depend on whether the bulls regain the momentum, which they had lost in August, or would the bears manage to acquire dominance during the tail-end of the year, MRK would go down much lower, as shown on this prediction graph. 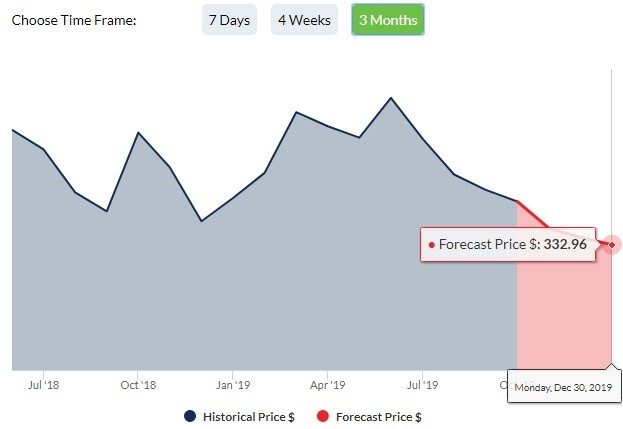 However, despite this seemingly unfavorable prognosis, the future appears to be quite bright for Maker, especially if the bulls do manage to overpower the bears by the end of 2019. Should that happen, the price of the coin could swiftly break through the 2019 high, like it always does when the bull run occurs.

As per technical analysis on a monthly time frame, Maker shows excellent potential for future growth, as confirmed by the indicators above. Therefore, MKR can be dubbed as a good mid-term investment, and it would remain a good trading instrument in 2020, thanks to its trademark broad price action.