The space of decentralized finance (DeFi) has been expanding vehemently ever since the market crisis in March. According to the official data, the total amount of money that is locked in DeFi has been growing exponentially from the middle of June, having gone from $1 billion to $3.65 billion, as of the time of writing, in a matter of a few weeks.

Please note that the dominance of Maker (MKR) already amounts to 27.67%, the highest among its peers, which is explained by the fact that the value locked in this particular protocol has just exceeded $1 billion, with the second most popular DeFi cryptocurrency Compound (COMP) trailing with $793 million. It is obvious even to the nascent trader that DeFi is the hottest place to be right now, especially in anticipation of the Ethereum 2.0 launch.

However, such an obvious success in terms of appreciation of MKR’s fundamentals is yet to find a proper reflection on the charts. Maker’s performance profile is also far from being impressive as the altcoin gained only 9.3% against USD, whereas its last month’s performance against BTC and the main rival Ethereum has been subpar: -9.73% and -20.83%, respectively.

On the yearly scale, MKR still remains in the red zone: -11.54% against USD; -24.14% - BTC, and - 41.67% - ETH. Nevertheless, such a great admiration of the MakerDAO protocol on the part of cryptocurrency investors could serve as a sign of an approaching bull rally that could take Maker closer to the all-time high at $1,839 that remains 72% away from the coin’s current price of $508, formed on the back of the 12% upward spike that occurred over the past week.

Would MKR finally establish a foothold above macro resistance?

The daily chart below reveals that Maker has made a futile attempt to break above the macro resistance at $630 during the previous bull rally that ended with the price being rejected at $700 and forming a textbook bull trap. 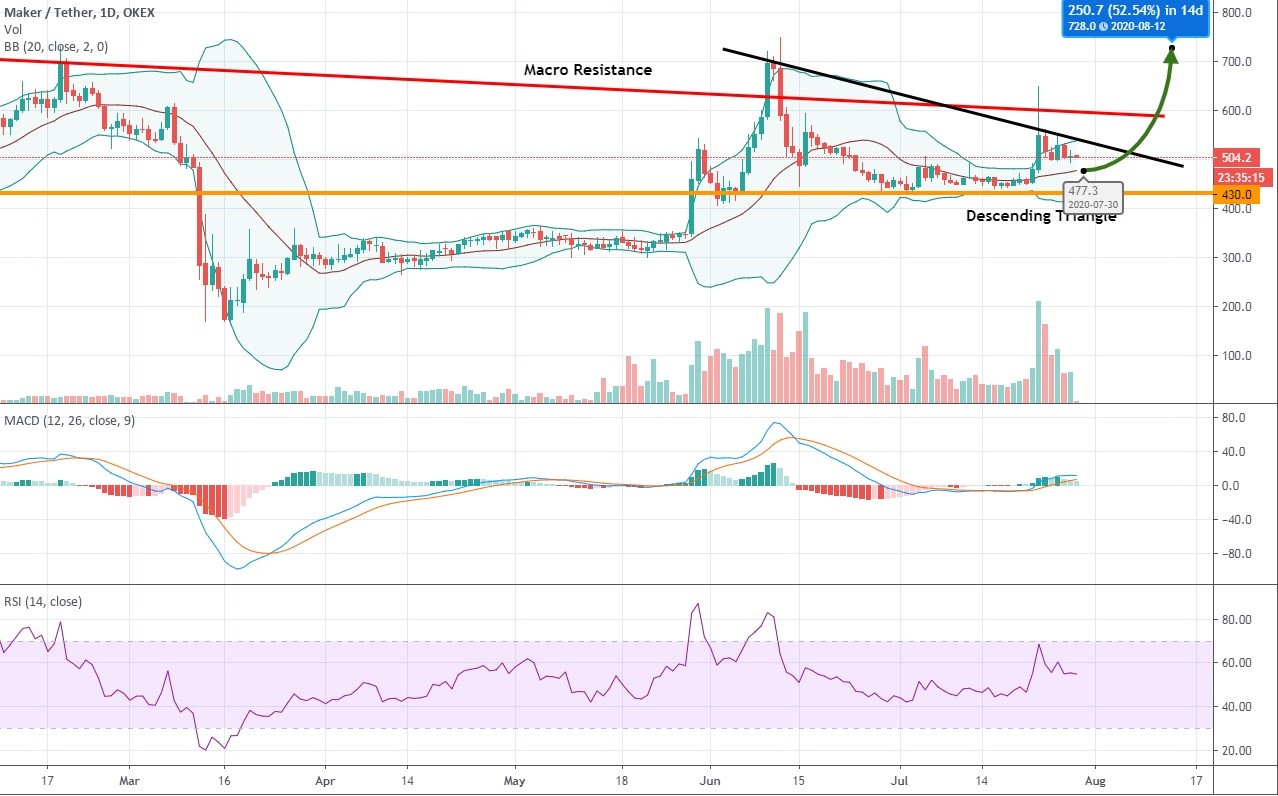 It is clear that the market participants have reached a consensus regarding the support level at $430 that has been tested multiple times over the past two months and proved its resilience. However, as the price appears to have failed to establish a new higher high after the said rejection, Maker finds itself locked in the descending triangle that is typically perceived as a bearish pattern. But as the recent developments in the cryptocurrency market show, the traditional perception and expectations from the patterns tend to play out the other way around, as we have often seen in the case of the golden cross.

Given how well the Maker ecosystem is doing, and the great prospects of DeFi in general, we could assume that big players in this market are trying to deceive the traders, who tend to jump the gun, into going short or setting the stop-loss too tight to the support line, with the purpose of liquidating these positions with a brief episode of the stop-loss hunt. MACD and RSI have descended to the neutral zone after the previous rejection, but the bears seem to be unwilling to pressurize the price farther down.

In summary, we predict that MKR will retrace to the middle line of Bollinger Bands ($480), but will ultimately proceed with its strive to the upside and break the macro resistance aggressively over the coming two weeks.