Nothing tests the resiliency of a cryptocurrency, or any other type of asset for that matter, then in the times of great commotion. The crypto market is entering the period of the survival of the fittest, which means that not all currencies will be there once the coronavirus backs off, and the global economy starts recovering from the devastating crisis that it’s heading to at full speed.

The Maker holders, however, shouldn’t worry too much since the coin still boasts the all-time ROI of 886%, despite the massacre that’s happening on the markets today. Some even view it as a brilliant opportunity to buy more coins at the lowest price ever - on March 16, Maker has established a new all-time low at $169.95. They say to buy when there’s fear and sell when there’s greed - well, the present level of fear on the crypto market has approached the extreme level, and it’s likely to stay there for as long as the global panic keeps gaining momentum.

We have absolutely no doubt that Maker will make it - forgive the tautology - through the ongoing turbulence because it has solid fundamentals, the decent market capitalization of $214 million, though it had also shrunk by half as the aftermath of the dump, and a relatively stable trading volume of $4 million to $6 million per day.

The question at stake is whether Maker had already reached its historical bottom, or is there a deeper trough to discover?

MKR has had a slightly different crash pattern than other top cryptocurrencies because it reached the new all-time low not on the first or second day of the crash, but on the fifth, which should tell traders that this coin isn’t fully correlated with the price action of Bitcoin or even the stock markets that appear to be exerting a growing impact on its cryptocurrency peer. 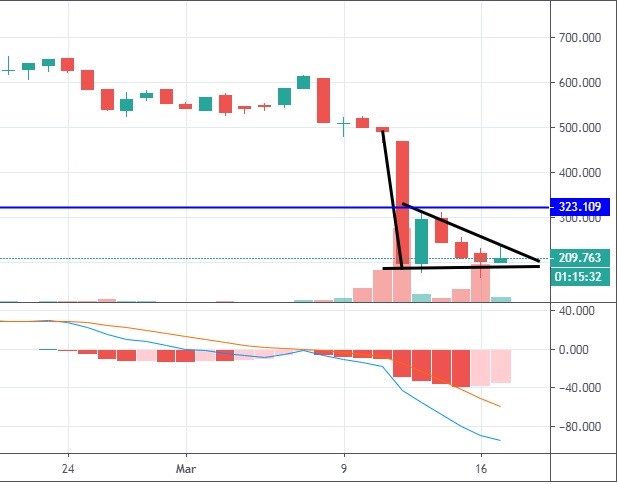 Nevertheless, the MKR price has already created a distinctive bearish flag pattern, which awaits to be breached any time soon. The direction of that breach is what should really concern traders now: if the consolidation has forced the price to adhere to the support/resistance levels again, then the most probable price target for the next move to the upside would be $323 - $350, the long-standing support-turned-resistance with which the price had interacted very closely in late 2018 - early 2019. Given the current situation, a move above that level is highly unlikely. The best-case scenario for Maker would be to reach $323 and get entrenched at that height for a prolonged period of time, thus giving a sign that the market will have begun to recover after a shock. The idea of a short upswing is backed by MACD, which is about to hit -100 and would have to bounce, and 14-period RSI that is gliding below -30. 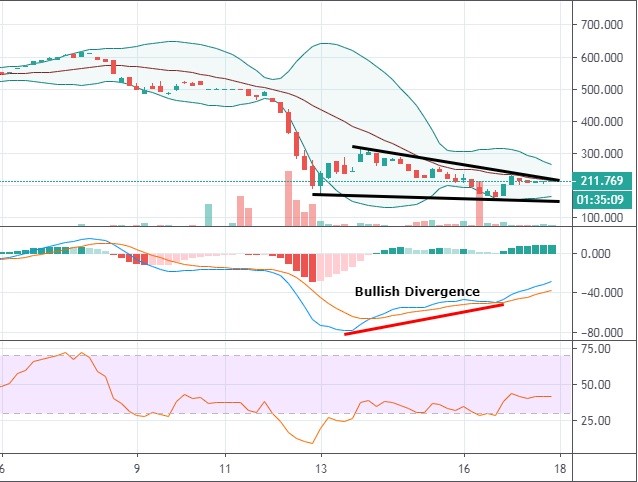 But the most interesting thing is happening in the 4-hour time frame where MKR has established a bullish divergence in cooperation with the MACD oscillator, and the price is very close to breaking out of the descending wedge to the upside. Plus, the Bollinger Bands are making a squeeze, signifying that the approaching upside move should be relatively strong.