MKR has been one of the strongest performers among the mid-ranked cryptocurrencies (the altcoin currently sits at the 24th spot), thanks to an impressive 81.3% price appreciation against USD that Maker has had during that period. It also did a much better job than the two dominant cryptocurrencies, having gained 70.5% against Bitcoin and 45.8% compared to Ethereum on the same time scale. 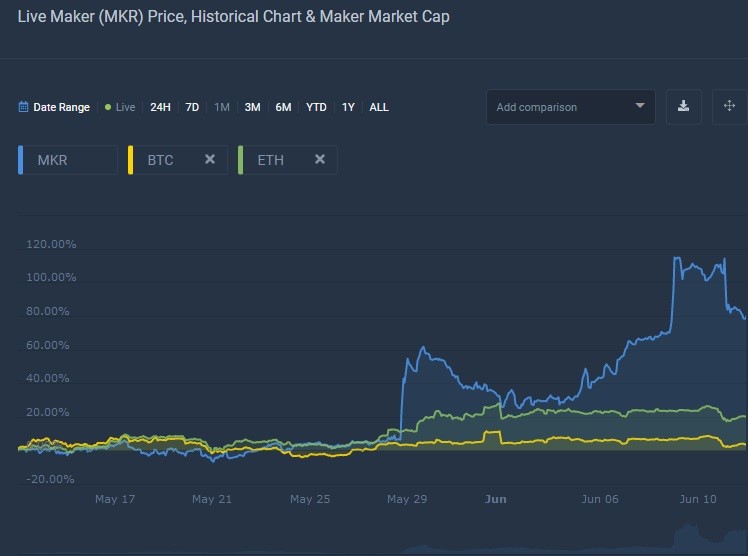 Interestingly, during the past 30 days, Maker has created the so-called Bart Simpson pattern, which is generally considered as a bearish one. This one has already begun to play out as the MKR traders have seen a significant dump from the local high at $747 to the current $597 in a large pullback that happened after the price had briefly breached the crucial macro resistance at $630 on June 10.

Maker needs to hold onto the resistance to remain bullish

On May 20, Maker has surprisingly made a very strong upside move after 77 days of tedious ranging in the bearish zone below $355, and the 50-period EMA. This price explosion must have caught many traders off guard since there has been no news of any fundamental upgrades or system updates that could have caused such rapid growth. Therefore, it is necessary to consider the probability of artificial price boost, mainly because this altcoin is being traded predominantly on OKEx. This exchange platform has been previously accused of doing wash trading, although the executives refuted these accusations. Certainly, that might not be the case, but make sure to exercise caution when trading MRK now, and don’t forget about stop-losses. 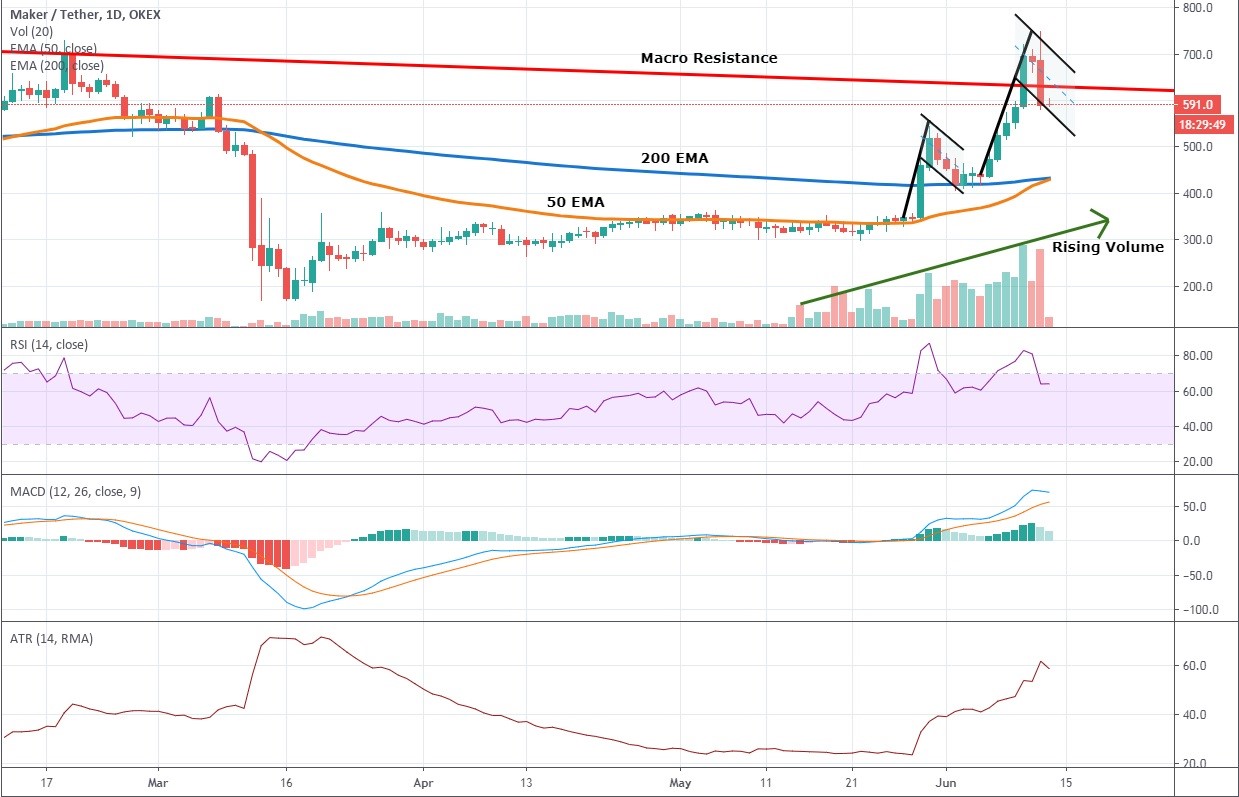 The chart above shows that entering that market at this stage would be extremely risky because the price is being pushed down below the macro resistance after being rejected at $700. Whereas the previous bullish move ended up is a textbook bullish flag, which resolved itself to the upside after the 19% retracement, turning this one into a fully-fledged continuation pattern would be a tougher task because the level at $630 is of vital importance for the bears who want to keep MKR with the existing downtrend.

However, several signs point to the probability of bulls getting into the driver’s seat in this market, the most notable of which is the golden cross that emerged on the daily time frame. And even though the cross hasn’t always been a reliable signal on its own, especially during the current price action cycle, but in this case, it is fortified by the methodically rising trading volume, with a huge cluster of buying volume during the breakout, and the bullish MACD that has finally peeled off the zero line and went above 50. Right now, the indicator displays the intention to perform a bearish crossover, although it would still remain in the bullish zone.

The RSI has fallen in the neutral area below 70, but without any divergences, making room for the possible upside move. Keep in mind that historically, Maker has shown the proclivity towards making big dips after the RSI goes into the overbought territory. Lastly, the ATR indicator is still at 60, meaning that the price volatility will persist.

Maker has the potential to initiate a secondary uptrend, but the price is at the crossroads, so traders must wait for a retest of macro resistance before entering a position.