Maker (MKR) remains one of the leaders of the ongoing DeFi revolution - some call it a frenzy - challenged only by Aave (LEND) and Curve Finance (CRV) in terms of the overall sum in USD locked in these projects. Right now, the Ethereum-based lending platform holds $1.26 billion, displaying the positive dynamics - 1.19% increase over the past 24 hours.

In the meantime, the total value locked in the DeFi sector had soared since our last MKR price prediction article from $3.64 billion to $8.2 billion, although it peaked at $9.6 billion before that huge dump on the cryptocurrency market in the first days of September that cooled down the hot-headed yield farmers who have been pouring money in DeFi since June.

Following a considerable pullback to $6 billion, the money resumed its flow into decentralized finance, which could have a positive reflection on Maker's price action. However, there are some worrying signs for the bullishly-minded MKR traders who expect the price to start having significant upswings again.

Maker finds itself below macro resistance

By the way, in our previous MKR price prediction article, we have foretold the extent of the last bull rally to the letter as the price had traveled 52% to the upside where it met a fierce resistance at $700. 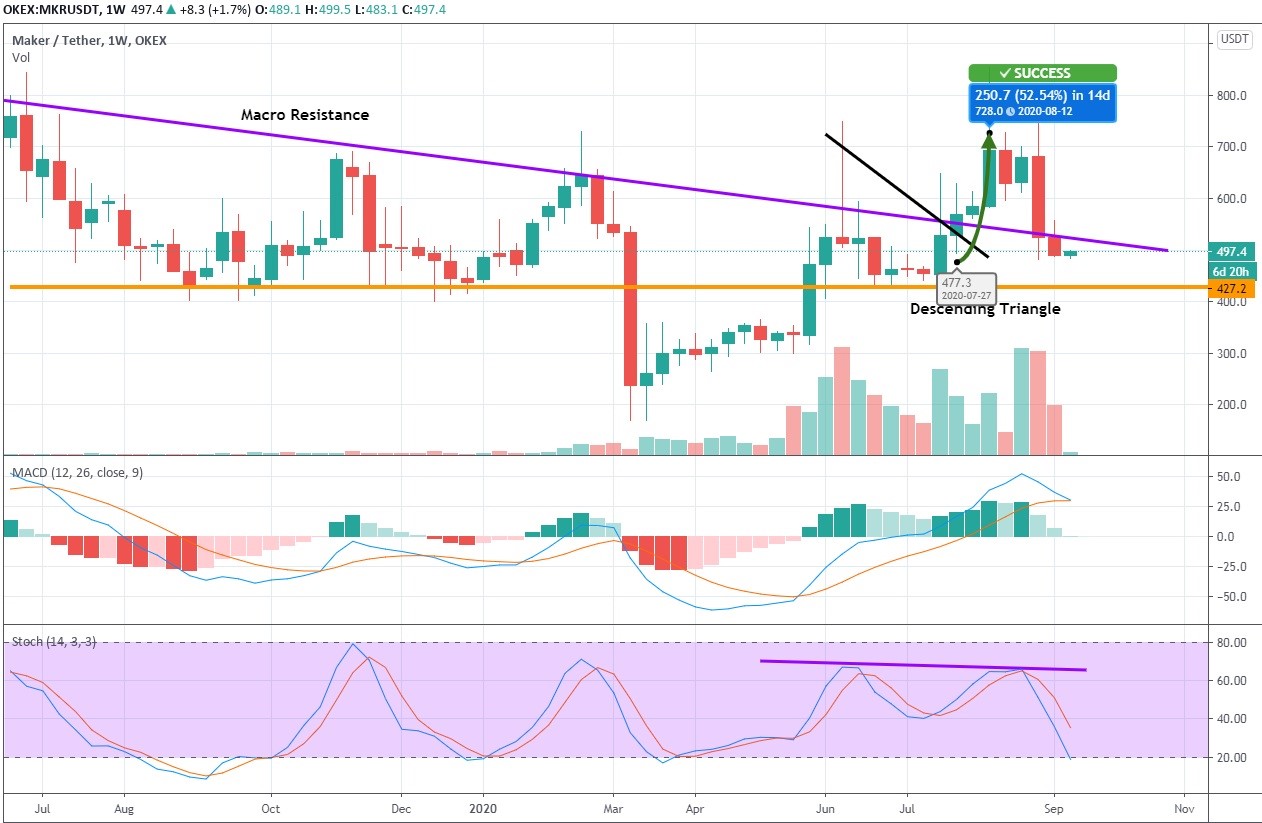 After spending two weeks bashing against that resistance, the buyers caved in and allowed the price to slip first to the macro resistance level at $528 and then below in a tough correction that had eaten away all of the cryptocurrency's gains since the tail end of April when MKR had broken the resistance at $430 to the upside over the course the powerful two-week rally.

To add salt to injury, during this week and the preceding one, the sellers have pressurized the price back underneath the macro resistance and put the entire bullish narrative in serious jeopardy. Right now, Maker once again finds itself within the confines of the descending triangle. Only this time, there are enough prerequisites for the price action to resolve this formation to the downside.

After more than three months of the ceaseless rise northward, MACD has hit the overbought extreme at 50, and is now on the brink of making a bearish crossover that would only accelerate the bearish momentum and make it easier for the sellers to drop the price below the tough multi-month resistance at $427 that was compromised only during the market crisis in March. There is still a chance that the main line could get rejected by the signal one, which would take the price back above the macro resistance, thus put Maker in the bullish context again. But the probability of that would become more evident over the course of the next week;

Another worrying sign comes in the form of distinctive bearish divergence on Stochastic that is already entering the oversold region and nearing the support at 18. We predict a deeper trough on the part on this indicator as the price will dangle around between $497 and $427 during the coming week.

The fact that Maker is below the macro resistance should tell traders not to take long positions in this market for now, and exercise the shorting options in case MRK takes the bullish turn and drops below $400.