Maker is an Ethereum-based smart contract platform that has performed reasonably well in the last two years, despite price crashes and volatility of the crypto market. In fact, it has found strong support, which kept it from sinking for more than a year now, keeping its price above $500 almost constantly during this time.

At the time of writing, the project sits at the 21st spot on the list of largest cryptocurrencies by market cap. Its market cap is currently at $553 million, while the coin's price stands at $553.49, after growing by 1.09% against USD.

While MKR may have found its bottom at $500, many are still interested in how high the coin may go in the future, which is what we will try to determine today. However, first, let's take a look at how it performed until now.

Then, in early December 2017, its surge finally began, taking the coin to $1,645 by January 22nd. This was the coin's all-time high (ATH), and it represents its highest achievement to date, even though it did not last very long. The coin started dropping after only a few days at this level, reaching $1000 two weeks later. Briefly, it appeared as if this level might be strong enough to stop MKR from dropping, but it failed to do so for long.

By April 1st, 2018, MKR hit $500, which has been its strongest support ever since. Immediately after that, the coin surged once again, and it even managed to reach and breach the resistance at $1,000. Eventually, the resistance was too strong, and it forced it back to $500. 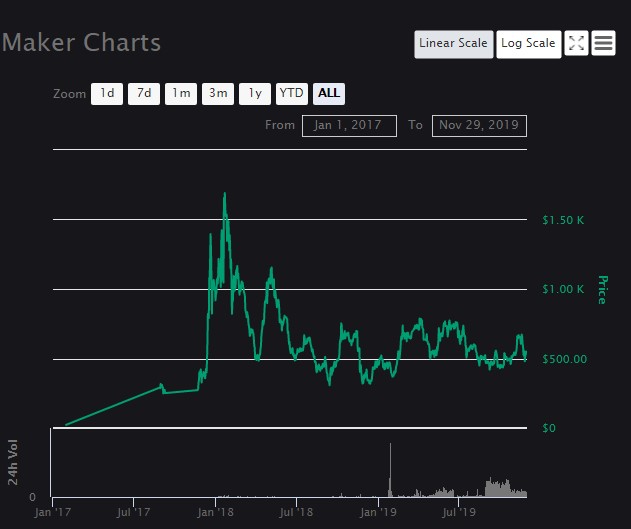 Over the next year and a half — to this very day — Maker has been fluctuating between $500 and $700, sometimes going above or below these two levels, but mostly being contained within them. The coin experienced its greatest stability after the end of 2019 bull runs, during the summer, when its price remained extremely close to $500, barely going up or down at all. Even now, MKR is only $54 above this level, which is not unusual for one of its fluctuations.

What is next for Maker?

As far as anyone can tell, MKR likely won't go below $500, no matter what happens. As for its probing of large resistances, the project had attempted to rise many times, although only briefly, before it was pushed back down.

As such, it shows the will to grow, although a relatively weak one, and it likely won't return to $1,000 or higher unless BTC itself starts leading a major rally.

With the end of the year being ever-closer, and Bitcoin still isn't making any moves up, many have started doubting that it will. If not, there is always 2020 that could lead to a new bull run or two. As for Maker, however, the coin has proven that it is a follower of the market trends, but not their maker.