XRP continues to occupy the third spot on the list of largest cryptocurrencies by market cap, with its current market cap sitting at $12.5 billion. Meanwhile, the coin also sees quite a lot of use, with a daily trading volume being at $1.5 billion at the time of writing. However, despite this, its price sits at $0.289, after seeing a decrease of 2.41% in the past 24 hours.

Even so, XRP continues to be one of the most-used cryptocurrencies around the world, and many of its users are likely wondering what is to be expected of the coin and its price. But, to try to predict that, we should first take a look at its past performance and see what can be concluded from it.

As you may know, XRP is one of the oldest altcoins in the crypto space, and it was launched in early August of 2013. For four years, its price saw only minimal activity, and for the most part, it was only a fraction of a cent. This started to change in early 2017, as cryptocurrencies started emerging from the shadows, and became known to a wider audience.

After that, however, the bear market took over, and the entire crypto space saw a major drop. XRP continued to spiral down, and it took 7 months, but it once again reached the price of $0.3 by mid-August 2018. Meanwhile, its creator, a company called Ripple Labs, continued with its efforts to partner up with as many banks around the world as possible, and in late 2018, a new wave of hype about XRP, Ripple, and its products took the coin's price to $0.61 as part of a small surge.

Unfortunately, the surge did not last for very long, and an incident regarding Bitcoin Cash's hard fork took place roughly at the same time, leading XRP price to drop once more to its usual levels between $0.25 and $0.28. The coin saw another small surge as the year ended, but this time, it only reached a resistance level at $0.36.

In 2019, XRP mostly struggled to breach this resistance, which it finally did at one point in May, when a series of bull runs took place and allowed some level of recovery for the crypto market. XRP reached the price of $0.48, which is when the bull run ended, and a large correction brought it down to $0,24, where it remained for an extended period. 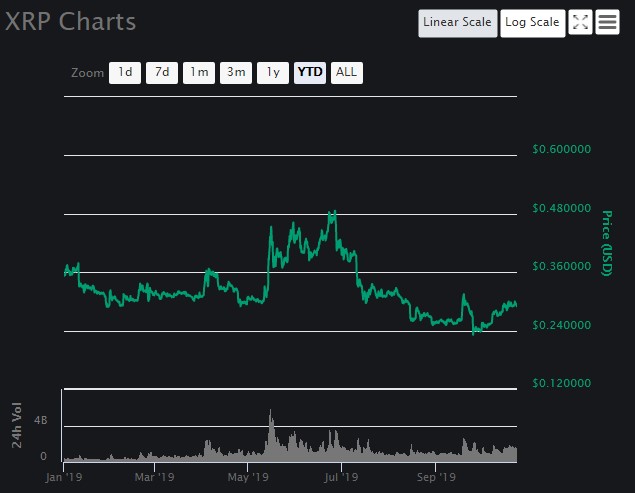 In the past several weeks, however, XRP price saw rise again, eventually reaching the current price of $0.28 once more, although it appears to be struggling with any further growth.

What will XRP do in the future?

XRP is not a typical cryptocurrency — it doesn't use the same technology, it faced a lot of criticism and accusations of being centralized and controlled by its parent company, and it is used as a fuel for the firm's payment solutions, which are in turn used by the banks and other centralized financial institutions.

However, this is also where its value comes from — its usefulness in instantly delivering cross-border payments. In other words, the more users of XRP there are (primarily among banks), the more its price is expected to grow. XRP holds the potential to be one of the first cryptocurrencies to be adopted, although there are no guarantees in the crypto space. Meanwhile, while it is often late to follow the market sentiment, it also participates in bull runs, and it drops when the bear market takes over, indicating that its price is still tied to Bitcoin.