As time goes by, it is becoming increasingly evident that Ripple will eventually lose its place in the top 5, and there is a big question whether it would be able to hold onto a place in the top 10. Since our last piece on XRP, the cryptocurrency for the digital payment platform has been superseded by USD Tether (USDT) at the 3rd place in global rankings as Ripple market capitalization fell below $9 billion and shortened the distance between its closest rival Bitcoin Cash (BCH) to $4.2 billion.

Obviously, Ripple still has that safety net, but given how badly it has been performing for more than a year now, the net could thin out very quickly. Also, don't let the fact slip your mind that Ripple Labs is still involved in a serious class-action lawsuit, and has issues with senior executives, most notably the co-founder Jeb McCaleb, who has been throwing enormous amounts of XRP into the market. Just recently, McCaleb sold 1 billion XRP, more than 20% of his total holdings. These facts aren't inspiring confidence into traders and investors, but they don't mean that Ripple is doomed - the market participant would simply have to embrace the inevitability of XRP degrading to the mid-ranked cryptocurrency in a matter of a few years.

But in the meantime, the currency for global remittances still boasts a respectable average daily trading volume of $2 billion and ample money-making opportunities. Just keep in mind that the majority of those opportunities would come from shorting Ripple as the bulls don't have the upper hand in this market.

Getting mired down in the range

Our last XRP price prediction, which said that the price would meet a firm resistance at $0.22 and then get pressured down to $0.194, has been played out by the price action to the letter. 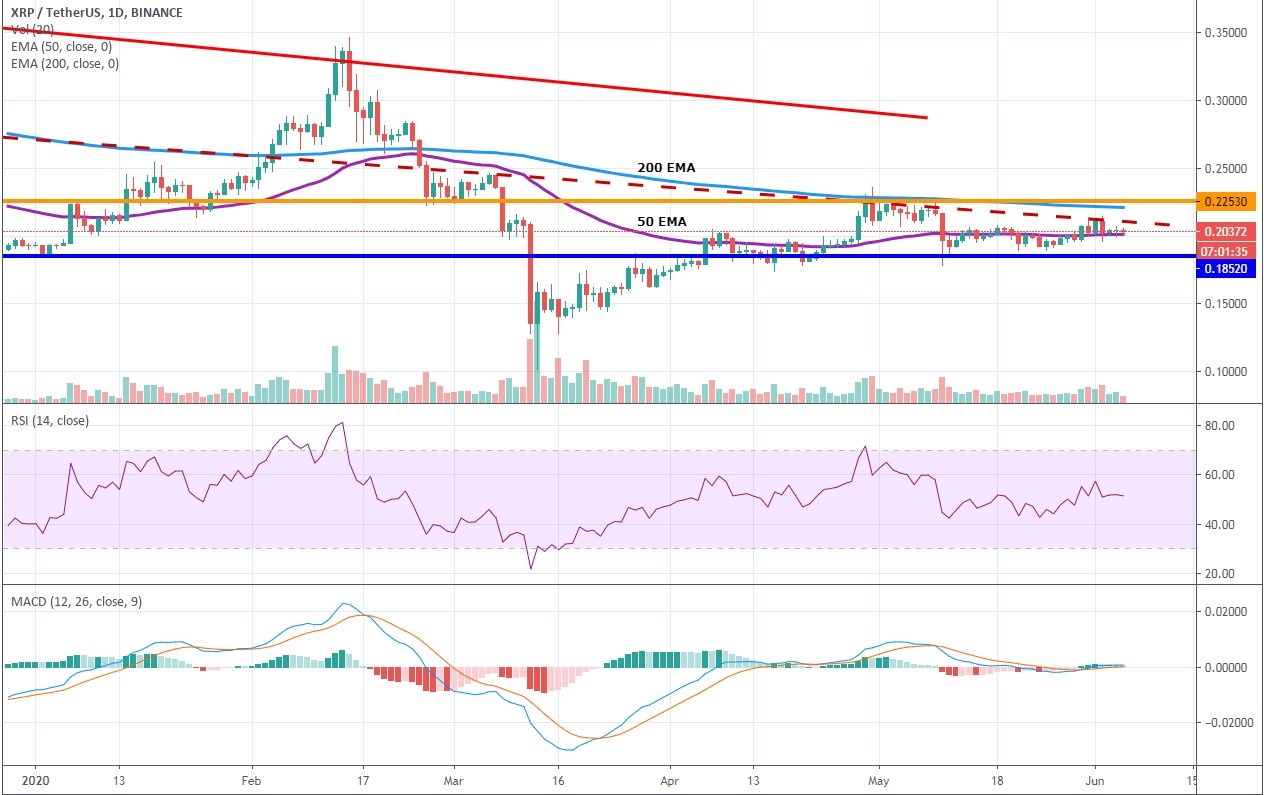 The price had experienced a strong upside impulse at the end of April that took it to the said resistance in two daily green candles where it had loitered idly for a few days and then slipped all the way to $0.193 on the daily close and started to range.

As a result of this move, XRP failed to rise above the 200 EMA, which signifies that the present downtrend will persist in the foreseeable future. Moreover, the latest market dump happened on May 20 and slashed the value of XRP by 20% in a day, forcing the price below the 50-period moving average, thus giving all levers on influence to the bears.

We reckon that Ripple has already established a distinctive trading channel with its lower border lying at $0.18 and the upper one at $0.22 - that is the corridor within which the price is going to flow over the next week. Notice how the price bounced off the secondary vertical resistance (dotted line) that now is becoming a part of the bearish descending triangle pattern.

Both crucial oscillators - MACD and RSI - are currently in the neutral zone while the ATR indicator is heading downward, which means that XRP will keep on moving in a narrowing range before breaching the support at $0.185 to the downside. Our order aggregator shows the biggest cluster of buy orders being concentrated at $0.1715, which is a recommended price target for a shorting play.