Many traders probably wonder, how come Ripple still manages to maintain its status of top cryptocurrency despite the poor performance of this altcoin throughout a long period of time. Over the past few weeks, XRP had lost its long-standing 3rd spot in the global rankings to USD Tether that exceeded altcoin's capitalization by $1.3 billion. Taking into account the negativity that surrounded Ripple Labs recently (the lingering class-action lawsuit and the covert releases of sizable sums in XRP into the market), there is little to no chance for the 4th cryptocurrency to climb up the ladder once again.

The current market capitalization of $7,8 billion, though, would allow Ripple to cling onto that position for some time, but we believe that it would be eventually superseded by likes of Cardano (ADA) (the team prepares for a massive system upgrade) or Binance Coin (BNB), thanks to the ceaseless development of the corresponding ecosystem.

These facts alone are enough to conclude that going long on Ripple is an almost hopeless endeavor since the altcoin displays no proclivity to bullish price action whatsoever. The best-case bullish scenario for XRP constitutes the trip to the trend-setting 200 EMA, which currently runs through $0.23 - $0.24 on the weekly time frame. 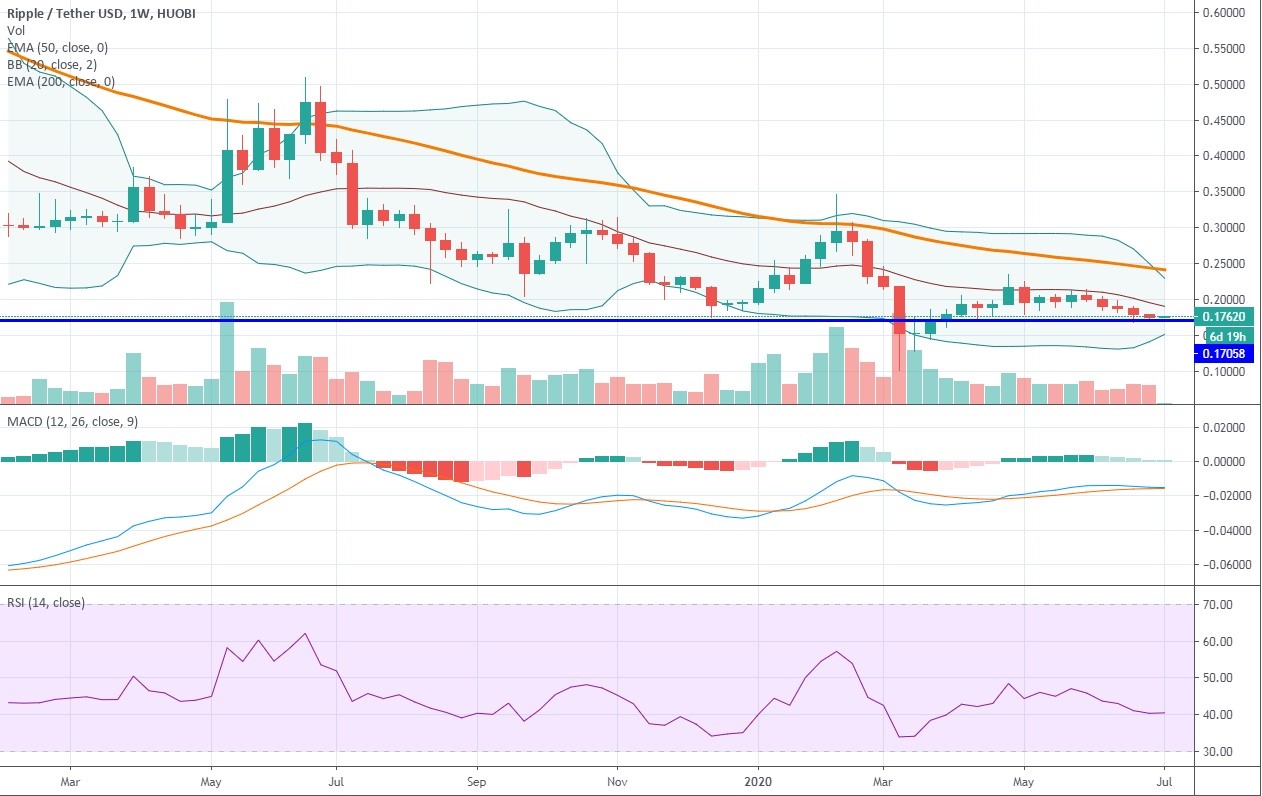 That could happen only if Ripple experiences a sudden influx of bullishly-minded retail traders who will force the coin to leapfrog from the present support level at $0.17, which has been standing since 2018, all the way to the mentioned moving average where it will certainly get brutally rejected because this EMA has been serving as a lid on the price action since the commencement of the macro downtrend. If that move is to occur, it would not exceed 30% - 37% to the upside, which is insignificant, given how much Ripple had lost over many months of bears' dominance.

However, our XRP price analysis shows the unlikelihood of the price descending below $0.16 - $0.17 - the bulls' last bastion of hope for an upswing. We've based that conclusion on the behavior of the major indicators, which appear to be in a more consolidating mood.

Bollinger Bands is another indicator that signals about the approaching tightening of price range as both its bands started to draw towards each other, a sure sign of the decay of trading activity and volatility.

The price of XRP could briefly fall below $0.17 as the selling volume is rising, but the buyers should curb that impulse and bring back the price to the state of balance near the lower BB line or the area between $0.16 and $0.17.