Only a few days ago, it seemed that Ripple (XRP) had finally mustered enough strength to break the fierce resistance at $0.3 as the entire cryptocurrency market was driving full-speed to the upside, incentivized by the excitement around DeFi as well as the favorable situation on traditional markets where S&P 500 made a new higher high at $3600. But then came the sudden double-digit drop across the whole cryptocurrency market, while S&P 500 got pulled back by 8% in two days, which ultimately brought all bullish efforts on the part of XRP to naught.

Over the past seven days, Ripple lost 12.6% of its value in USD, while staying on the level with Bitcoin (BTC) that also lost 12%, and even outperformed Ethereum, which is troubled by the piling gas fees, by 3%. 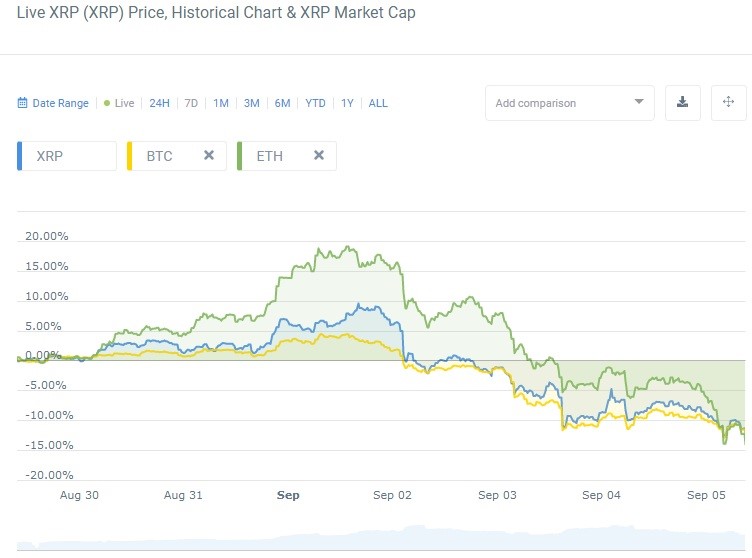 Traders haven’t heard of any significant improvements in fundamentals or business ventures coming from Ripple Labs, so the 4th altcoin - USD Tether had once again surpassed Ripple in terms of market capitalization and pushed it off the 3rd spot - literally has no means to turn the current bearish situation in its favor, so it will be forced to act in synch with the rest of the market that is almost in freefall now.

You shall not pass, said the resistance

The past four weeks must have been especially tough for XRP adepts because the altcoin had, at last, begun to show genuine intention to go past $0.3. But it was not meant to be as the seller had no trouble rejecting XRP, which is further exacerbated by the fact that the price stalled despite MACD showing the largest bullish momentum since the rally of 2019 as it has ascended above the zero line and even made it to 0.017, indicating how strongly the buyers tried to push the price, but to no avail. 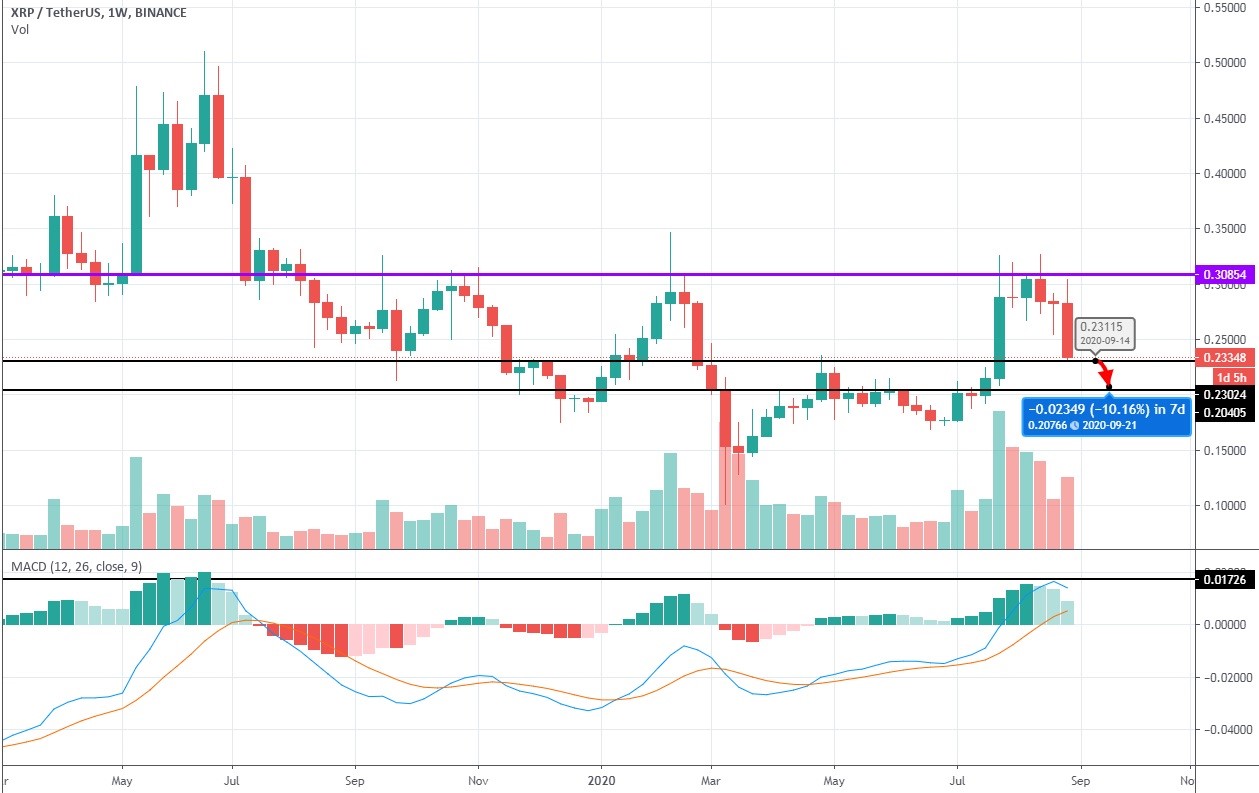 It became evident that Ripple had failed at that level for the third time in a row, but what followed was a swift pullback, comparable to the one that preceded the March market collapse. Drawing direct parallels might be a bit too early, but if the buyers won’t extinguish the bearish pressure at $0.23 - XRP’s current price level - a drop to $0.2 seems almost inevitable. Considering the absence of any signals of recovery coming from Ripple and the rest of the market, another 10% drop that would wipe out all gains from the previous months looks more than feasible.

The daily time frame shows Ripple testing the 200-period EMA while diving fully under the 50 EMA for the first time since the beginning of July. 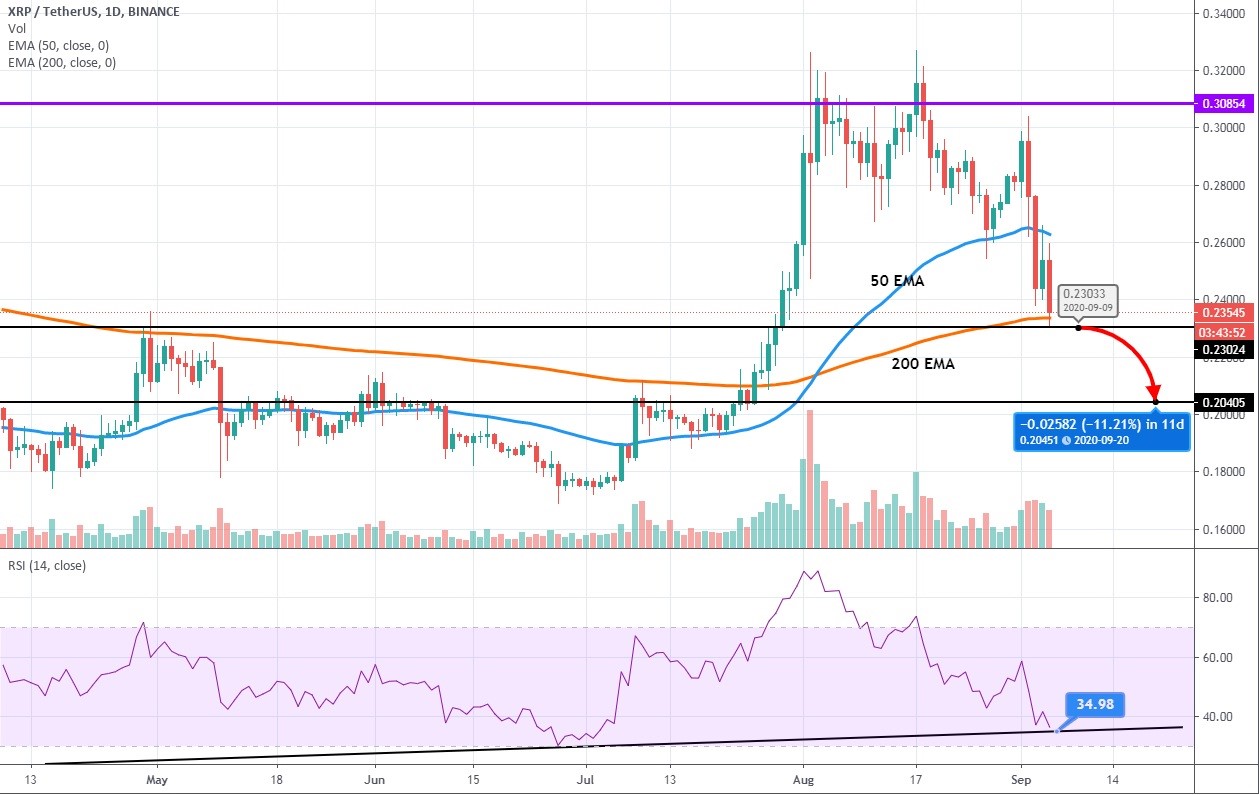 Right now, keeping above 200 EMA is XRP’s only hope of staying within the framework of the uptrend. At the same time, the 14-period RSI has to bounce off the support at 35 to the upside to confirm that the buyers are still in the game. But given how overwhelmed the bulls are at the moment, we are likely to witness at least a brief descend to $0.2 before some reversal signals start to emerge.