Stellar is a project that has been balancing at the edge of the top 10 list of largest cryptos for months now. The coin often occupies the 10th spot on this list, although instances when it gets pushed out of the list by another coin are also quite common.

At the time of writing, however, XLM sits as the 10th largest cryptocurrency, with a market cap of $1.3 billion and a trading volume of $217 million. As for its price, it is currently trading in the red, with a drop of 1.42% in the last 24 hours. That places the coin's price at $0.064950. Interestingly enough, its price is actually growing by 0.78% against BTC.

Obviously, this uncertainty is troubling many who are interested in where Stellar plans to go from here, which is why we will try to answer that very question right now.

To try and understand what the project might do next, we should see its price performance throughout the years.

As many might know, Stellar is an old coin, one that saw launch all the way back in August 2014. This makes it officially older than Ethereum itself. However, the coin did not exactly attract attention for a long time — several years, in fact.

Its price did not exactly sit perfectly still during this time, but its first notable movement came in May 2017, when it surged briefly from $0.003506 to $0.041065. The surge ended relatively quickly, and Stellar was dropping again towards old levels before long. However, only a few months later, in November 2017, XLM saw another surge. 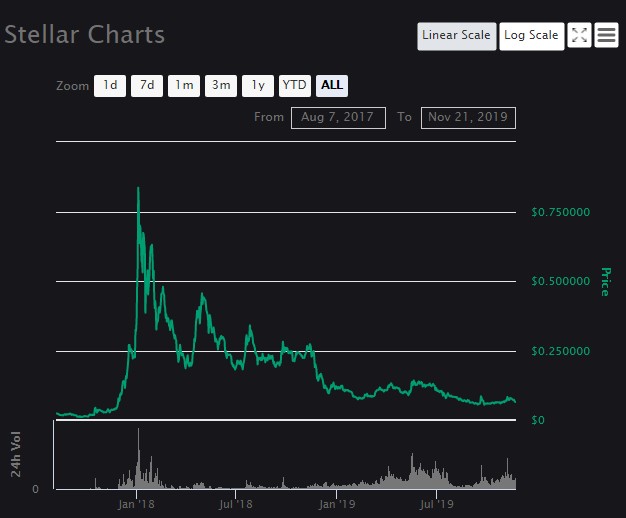 This time, it did not only surge by a few cents — it climbed all the way up to $0.91, which is its all-time high (ATH) to this very day. Unfortunately, its price did not stay there for long, and the early crypto winter quickly knocked it down to a support at $0.25. Stellar did not go down easily, as its supports attempted to stop its drop multiple times.

Even when it reached to $0.25, it attempted to climb towards $0.5 multiple times. However, each attempt was weaker than the last one, and the coin eventually gave up. Then, about a year ago, the second market crash forced it to break its support at $0.25 and find a new bottom at around $0.07. The coin remained close to this level ever since, and even in the most heated moments of 2019's bull runs, it only ever went as high up as to $0.13, only to drop back down when the bull runs ended.

What will Stellar do next?

With the end of the year approaching, many are wondering whether XLM will be one of the coins that will bring a massive surge. While there are no certainties about it, this doesn't seem to be the case.

XLM's early years were quite peaceful as the coin simply did not attract attention. Even now, its trading volume is the lowest among the top 10 coins, excluding BNB, which has seen only around $5k fewer in daily trading than XLM.

Stellar is a good project with a noble goal in mind, but it is unlikely to be a leader of any surge. Even as a follower of surges, it feels a bit dispassionate, and it only joins the party because everyone else is going. Instead, the coin's strength lies in stability, and it takes a lot in order for it to suffer major losses, which might be something worth keeping in mind.