Stellar has been moving in sync with the entire cryptocurrency market, taking an active part in what appears to be a nascent altcoin season. While its gains haven’t been eye-popping - 47% in the last 30 days, traders and investors shouldn’t be feeling underappreciated by this coin. Fundamentally, Stellar is more than solid - there’s no need to reiterate its superior capabilities for cross-asset transfers.

Battling for the place in the rankings

XLM is undoubtedly in the top 10 of all traders who consider themselves fundamentalists, whereas, in the global rankings, it has been struggling to get past the 13th place on Coinmarketcap. But it could get a chance to climb higher in 2020 and replace Tron or Cardano on the 12th, judging by how fast it has been gaining the market capitalization and trading volume. For instance, at the end of the first week of January, the market cap of XLM amounted to $972 million, while the average daily trading volume barely exceeded $200 million. A month later, the volume has more than doubled ($519 million as of the time of writing), while the market capitalization got a 50% boost and reached $1,4 billion. That shows great progress made by the coin itself, as well as the team that stands behind it, which promises significant system upgrades over the course of the present year, which will surely reflect positively on the price of XLM.

Stellar’s action on the charts

While the realm of cryptocurrency traders is buzzing about the massive gains put up by altcoins, including Stellar, since the beginning of the year,  it seems to get slightly carried away from reality.

And the reality is that XLM has only begun to climb out of the ditch where it has been pushed by a steep correction that had commenced in the summer of 2019. 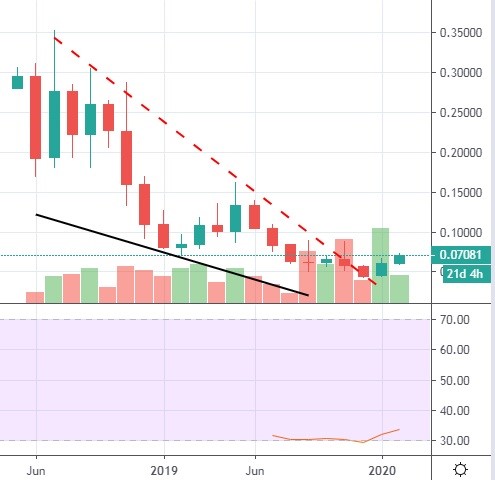 The monthly chart shows that the price of Stellar has just broken out of the descending wedge formation to the upside, but the probability of it being dragged back by the bear still remains. The third candle that closes in the area of $0.1 would serve as a confirmation of the conclusive downtrend reversal. 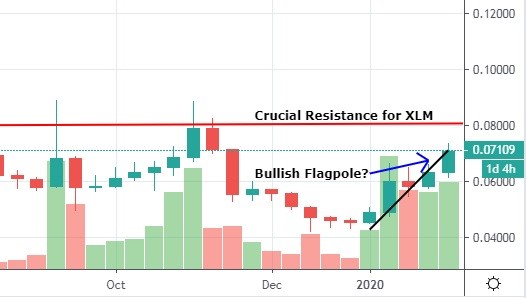 The weekly chart also doesn’t display the pronounced inception of the uptrend for XLM, as the coin is yet to come across a serious resistance at $0.08, which has been tested three times over the course of the last six months, but to no avail. It appears that this resistance would come as a top of the bullish flagpole that would signify the beginning of retracement to $0.6 - $0.62. 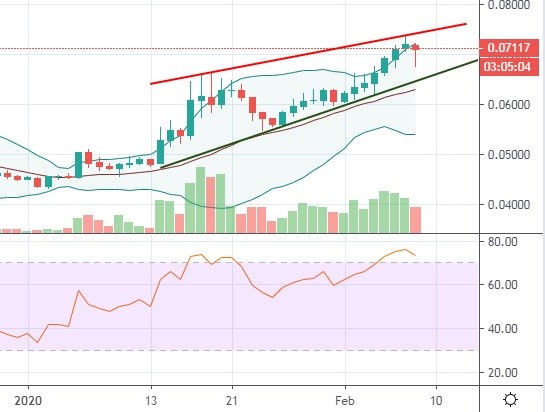 The daily chart supports the notion of an upcoming pullback of the XLM price on the basis of three factors: the 14-period RSI being at 70, which is a highly overbought area; the fact that the price has just touched the resistance line of the ascending wedge; the candles have already broken through the upper line of Bollinger Bands which, in most cases, results in a slight price decline.

All in all, with regard to Stellar, traders should wait for a retracement to take full force and then enter a long position after the confirmation of the next swing to the upside.