Unfortunately for Stellar holders, the price of the 13th cryptocurrency has been in freefall over the last month, having dropped by 16.2%, and by 31.5% on the year-to-date time frame. Despite a seemingly productive month on the part of Stellar developers: the launch and the subsequent update of Horizon 1.0, along with the release of Kelp v. 1.8.1 on the Stellar network, the value of project’s proprietary cryptocurrency has been declining in leaps and bounds - 38% in little more than two weeks, to be precise. And now, it is only 20% from canceling out all gains that had been acquired since the inception of the year.

There is probably no need to reiterate that the global coronavirus threat is to blame for such an overwhelming price drop - the question now is what traders, who haven’t liquidated their positions during the initial drop in the face on an enormous bearish engulfing candle, should do - should they sell the XLM holdings and cut the losses or take a minimal profit, or hold on to the coin in hopes of a market recovery after the global hysteria dies down and the markets, including the cryptocurrency one, finally stabilize?

Pinned down by the bears

The daily time frame shows the gravity of the situation for those who obtained XLM before its last upswing in hopes of the continuation of a minor bull market. Those who failed to sell at the top, or after the bearish engulfing, or even during the short-lived consolidation phase, when the price appeared to have stuck at the previous support at $0.07, which would have allowed those traders to break even - had to watch the chart form a textbook bearish pattern - the three black crows. That move contained so much power that it had taken XLM straight below both 50-period moving average and the 200-period one. It is worth noting that this market has played a huge trick on traders as it had formed a golden cross right before the massive price drop. Those who had bought this signal and went long on Stellar must have had their stop-losses triggered en masse, which has only instigated the decline. 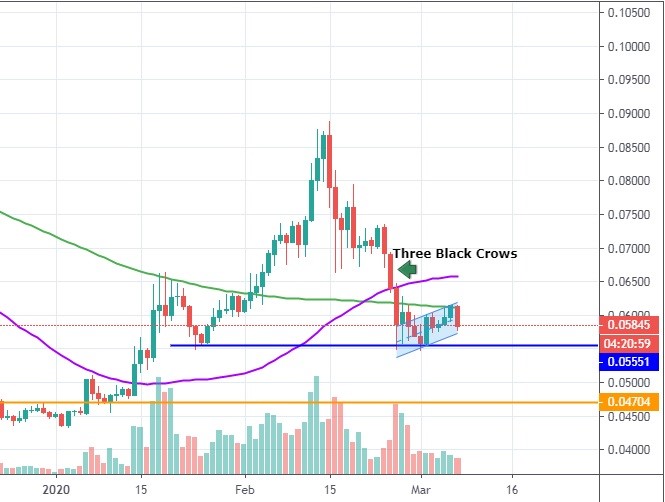 Right now, the coin has made an attempt to bounce off the previous support level at $0.055 but appears to have been rejected at the 200MA. Similar to many other cryptocurrencies, Stellar is finalizing the formation of the bearish flag that is more inclined to break to the downside, hence smashing through the mentioned support and collapsing to $0.047 on the daily. This move would represent the next stage of the bearish retracement and put a final dagger in the bulls’ coffin. Although traders who had exited their positions in a timely manner should be looking for an opportunity to stock up on XLM once the price reaches its potential bottom at $0.047. 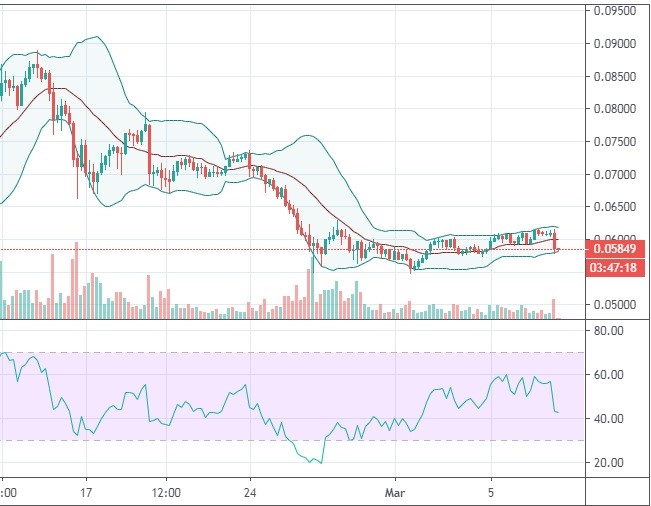 On the 4-hour time frame, Stellar appears to be exiting the Bollinger Bands squeeze to the downside, judging from the high selling volume that accompanies the first red candle that almost engulfs the entire price range of the previous days. This could signify the beginning of the period of high volatility, dominated by the bears. The 14-period RSI is heading for the overbought region, which is another sign that it could be the right time to short Stellar.