While Bitcoin and Ethereum are still retaining the dominant stance, there are cryptocurrencies like Ripple (XRP), Litecoin (LTC), and Stellar Lumens (XLM) that are most likely to lose their respective positions in the global ranks to the likes of Binance Coin (BNB), Tezos (XTZ), and Chainlink (LINK).

The past year was quite brutal to XLM as it lost 50% of its value in comparison to all three major currencies - USD, BTC, and ETH. However, judging solely from the recent price action, Stellar has probably the biggest chances out of the mentioned three to turn things around and embark on a secondary uptrend. But before it does that, XLM has to overcome a major obstacle, as well as defy a notorious bearish signal.

Stellar arrived at an important resistance - what's next?

In all candor, XLM has put up an impressive performance since it had broken the resistance at $0.047 and got itself above the 50-day exponential moving average, under which it had been staying for two months. 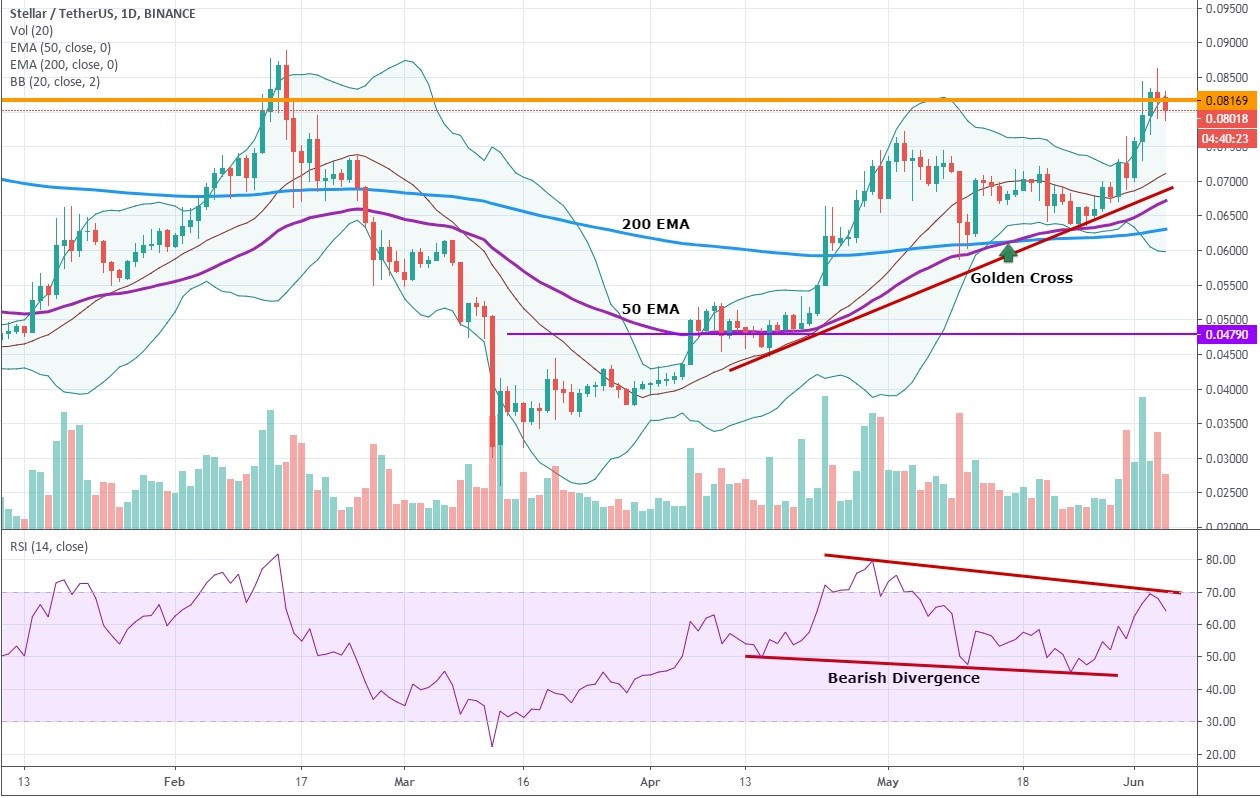 April 20 marked the beginning of an impressive bull run that juiced up the price by 71% in 49 days and gave the bullishly-minded traders a hope that this market could be overrun by the buyers. But now, upon reaching the critical resistance level at $0.08, XLM has got itself in an interesting situation because of the presence of conflicting signals.

While the overall price action appears to be bullish at a glance: the buyers got Stellar above the trend-determining 200-period EMA, then the price has properly tested its capabilities as a line of support, which at that time was located at $0.06, and then went on to make an attempt at $0.08. Moreover, on May 16, the price action has pulled up the 50 EMA to the point where it formed a golden cross.

Actually, that was literally the first time since late 2018 when the paths of these two moving averages had crossed, which might add significance to that particular signal. Yet it emerged right in the middle of another pattern of equal importance - the bearish divergence on the 14-period RSI. The divergence began to form in the third week of April, right when the price mounted the 50 EMA, and was finalized on May 24, after the price tested the 200 EMA for the second time. That pattern usually constitutes a very strong bearish signal, so we predict that the divergence is going to negate the golden cross, leading to a deep pullback.

This XLM price prediction is also based on the fact that the price has run head-first into a reinforced resistance that has been impenetrable since September 2018, although Stellar had already made four swings at it, but to no avail.

We would leave the 10% probability of the fifth time being a charm, and that Stellar could overpower that resistance in one go, but the presence of an undeniable bearish divergence, as well as the increase in selling volume during the last price move, leaves the remaining 90% to the bears. Plus, the 14-period Stochastic is already in the overbought area and crossed to the downside, so the pullback is practically imminent. It could be either to the middle line of Bollinger Bands ($0.72), or the price will drop to (or even below) the 200 EMA or $0.063.