When it comes to Stellar (XLM), the coin is quite old, and it pre-dates Ethereum by over a year. However, it did not start getting attention until mid-2017, which is when it finally grew from $0.002 to a more reasonable price. Its first big move up came in May 2017, when it climbed up to $0.05. After that, it dropped once more, before starting to grow again in October of the same year. On October 2nd, 2017 — Stellar's price was $0.01. Only three months later, on January 4th, 2018, it exceeded $0.9. This was a major change for Stellar, but unfortunately, it did not last.

The bear market of 2018 knocked down the prices of coins quite a bit, and Stellar did not escape it. After reaching its all-time high on January 4th, as mentioned earlier, the coin spent the following months dropping, and breaking one support after another. In fact, it kept going down until it hit $0.2, which acted as its major support for the rest of the year. 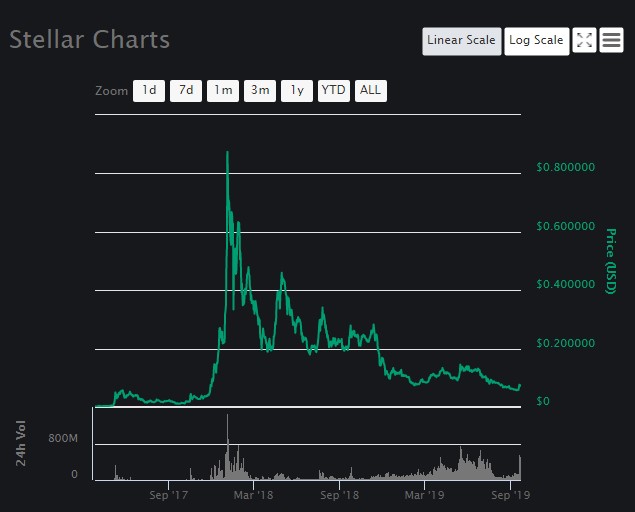 Meanwhile, its largest resistance sat at $0.4, although as time moved on, each new attempt to even reach this resistance became weaker than the previous one. Eventually, as 2018 was coming to a close, Stellar's attempts at a surge ended by reaching a smaller resistance level at $0.25, while its support at $0.2 still managed to hold it.

Unfortunately, this changed in November, after the market got disrupted by Bitcoin Cash hard fork, which resulted in a second price crash. Stellar finally broke its strongest support, and had dropped below $0.1 for the first time in over a year.

This is where Stellar found itself when 2019 had arrived, and unfortunately — the situation did not get a lot better. Stellar did seemingly react to the price surges in the first half of 2019, but every surge in which it participated barely took it up by a cent or two, sometimes not even that. 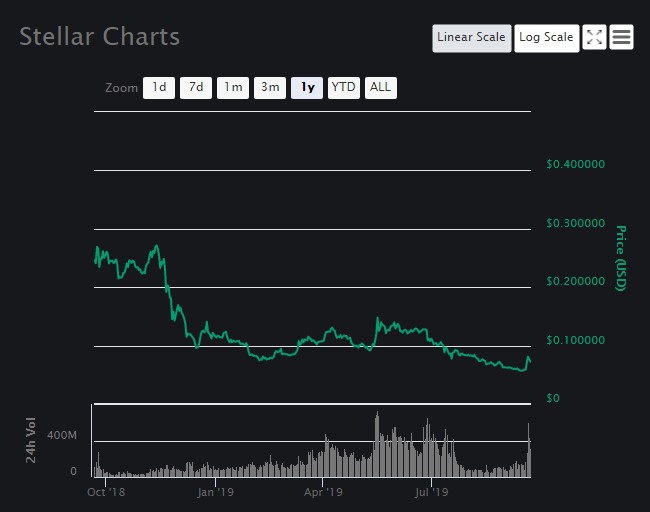 Its biggest achievement in 2019 was the fact that it managed to once again go above $0.1, although this ended in June, when the surges stopped, and the price correction took place. Since then, Stellar did not only undo all the progress that it made in early 2019, but it went even lower than where its price was before the surges.

Before, XLM price was kept from dropping down by a support at $0.08. This support was finally broken in early August, and the coin dropped all the way down to $0,05.

In the last week, however, it made a surprising comeback, surging up to $0.08 in an attempt to breach this level again, but it had resulted in failure.

What awaits Stellar in the future?

The future of Stellar remains uncertain. There is no doubt that the coin had managed to survive a very tough period, but its daily trading volume is only $321 million, which is a bit weak for a cryptocurrency that sits among the top 10. Stellar could still make a comeback if the surge that investors are hoping for arrives in days to come. However, historically, Stellar was usually late to the party, or unresponsive during previous surges.