If someone said in the last days of January that NEO is going to fall to the lowest price level since 2017, that person would have been labeled as an urban madman. But things turned out the way they did, and now traders and investors are trying to elaborate tactics and approaches relevant to the current circumstances, which got everyone but the most industrious entangled in an aggressive bear market with tons of rapidly devalued assets on their hands.

Nevertheless, it’s not the first nor the last time that NEO, and the rest of cryptocurrencies, suffer such a disaster, so all that’s left now is to learn to adapt to the current market climate and plan for the future price recovery. NEO badly needs that recovery because the coin risks losing traders’ interest, although long-term investors must be keeping their composure as the 23rd cryptocurrency still retains 3800% in terms of all-time ROI.

Even though NEO lost 60% of its value in a span of 48 hours, the price of the coin still hasn’t crossed the psychological level of $0.07, which constitutes the all-time low. The freefall had been stopped by the buyers at $3.9, a point comfortable enough for the market participant to start obtaining new positions from the 3-year low. Given that many traders must have fled this market after the notorious crash, or decided to lay low until the overall picture and prospects become a bit clearer, there hasn’t been a lot of action on that particular market in the last week and a half, although the emerging tendencies seem to be quite interesting. 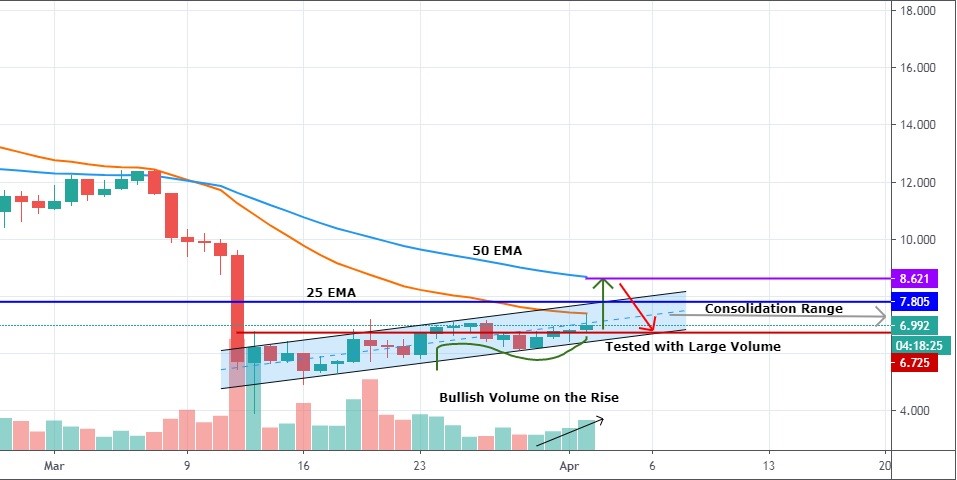 Indeed, NEO hasn’t shown any large price spikes in either direction during the recovery period, while the Average True Range indicator showed a gradual decline from extreme highs at 1.4 to the present 0.8, which means that the volatility associated with this coin is likely to keep declining, thus tightening the range of price action.

But what’s really fascinating about NEO is its volume profile, which shows a furious underlying battle between the bears and the bulls who want to break away close - or above - the 50-period moving average. Also, note that the price has already tested the 25-period EMA once but got rejected. But the fact that the buying volume during the last upward move has been on the rise, as we saw four green days in a row,  speaks to the fact that the participants have allocated large enough positions to push the price higher, towards the 50 EMA or $8.6.

This forecast is substantiated by the notion that the bulls, which had been trapped in the bearish zone below $6.72 that formed after the first post-crash green candle and the largest buying volume in that particular period, would want to add to their positions once they have seen a full confirmation of a breakout from the designated zone. The verification should come in the form of a red candle that should stay above the current support level, along with a lesser selling volume.

Besides, the chart shows the formation of a bullish S-curve, which is yet another prerequisite for the stride to the 50 EMA. Keeping in mind the decreasing volatility, this move could be slow and gradual. Once it’s completed, the consolidation range will be between $6.72 and $7.8.