NEO (NEO) is a project that many had quite a lot of expectations for. Known as 'Chinese Ethereum,' it was believed to be one of the greatest candidates for the title of "Ethereum Killer." However, as time went by, NEO started to lose its influence and popularity, not to mention a constantly dropping price which currently sits at $7.07.

The coin currently has a market cap of only $498 million, and a daily trading volume of $265.5 million. In other words, NEO still isn't dead, but it certainly doesn't sit as high as it used to a year or so ago. As for what awaits it in the future, we may be able to discover it by looking at its past.

NEO is a coin that is around three years old at this point, after seeing a launch in early September 2016. The coin spent almost a year with its price being well below $1, which finally started to change in May/June 2017, when it got caught up in a price surge that took it all the way up to $160. 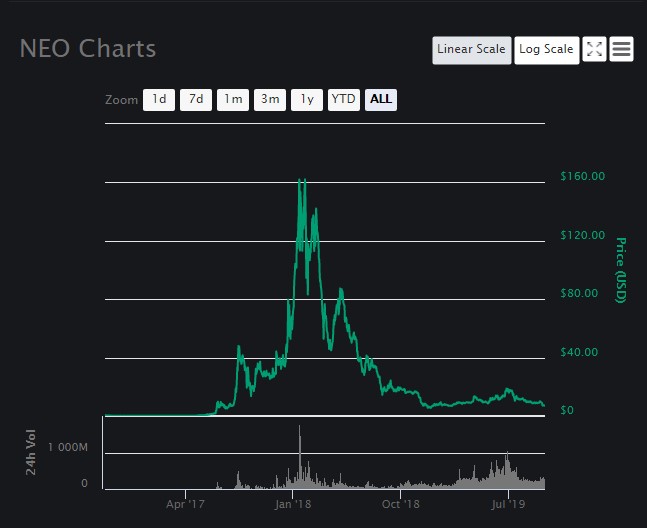 This was the coin's all-time high, although NEO did not remain this high for long. The market crash in early 2018, followed by a year-long crypto winter took their toll, and NEO kept dropping lower and lower, eventually reaching its new bottom at $5. While this is still above the price it had before the price surge in 2017 — it is still pretty low when compared to its ATH.

The situation seemingly started to change for the better in 2019, when NEO slowly started to grow, eventually breaking several minor resistances, including the ones at $8, $12, and $18. It was on its way of breaching the resistance at $20 when the rally ended, and the prices went through a correction that even took Bitcoin down by several thousands of dollars. 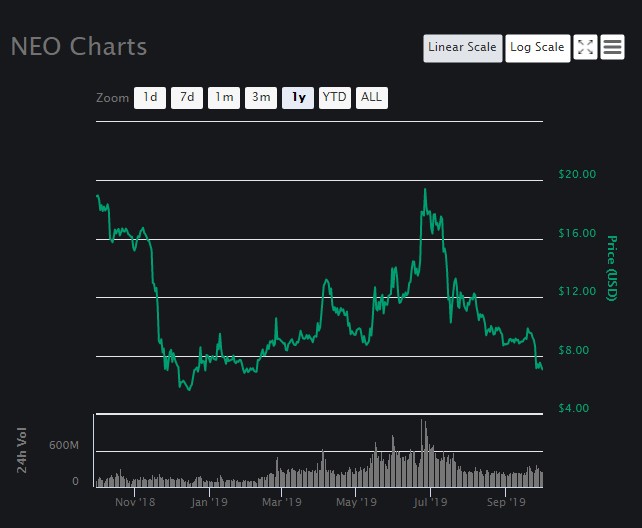 As for NEO, the coin spiraled down to 10, and while it did try to grow once again and breach the resistance at $12 several times over the course of late July and early August 2019 — it was not to be. Eventually, it surrendered to the bear market once again, and it is currently below $8 once more.

What to expect from NEO in the future?

As far as anyone can tell right now, NEO's future as Ethereum Killer is over. Its main competitor — EOS — still has the upper hand, and it currently holds the greatest potential for becoming the dominant development platform.

NEO itself appears to be losing its influence and popularity, as well as its value. The coin did respond to a rally earlier this year, although nowhere near as well as most other cryptocurrencies. For example, Bitcoin's growth took it past halfway towards its ATH, while NEO did not even reach $20. If it were as successful as BTC, it would have reached at least $100 at its highest in 2019.

In other words, the coins are far from being a great performer, and it is unlikely that it will return to its former glory. It still has a lot of support, as confirmed by its relatively decent trading volume, especially considering when the next coin on the list of largest cryptos — USDC — has less than half of NEO's volume. Even so, NEO appears to be sinking, and its performance does not indicate that it will make a comeback anytime soon.