There has been a resurgence of altcoins since the beginning of May as Bitcoin dominance has once again begun slipping and going from 69% to the current 65.8%. NEO belongs to the cohort of cryptocurrencies that have had an excellent month as it outperformed the leaders by 28% (USD), 21.8% (BTC), and 9.5% (ETH). The past week has also been fruitful for Neo as it fattened up by almost double digits against that trio. 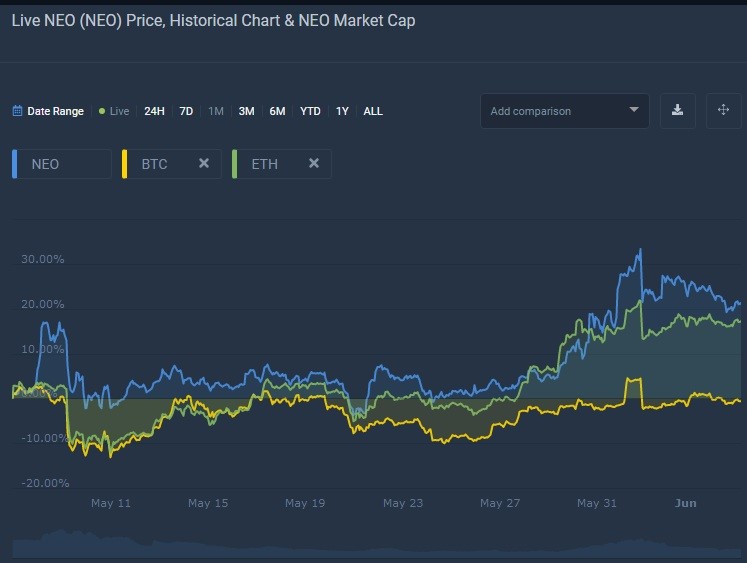 Although on the yearly time frame, NEO is still 1,7% short of making up for the losses in USD, sustained in 2019, its overall price behavior suggests that the bulls are laying the groundwork for a considerable rally that has the potential to reverse the lingering secondary downtrend.

The resolution of the ascending triangle speaks of bullish intentions

The daily chart below shows that Neo dealt really well with the consequences of the so-called coronavirus crash by not being reluctant to begin a gradual recovery to the previous price levels. Those who have determined the rising channel the same way as depicted on the chart should have made a decent profit as there have been a few decent price swings on NEO’s way to recovery. Now, the price has approached the area of multiple resistance levels that could complicate its way to the upside. 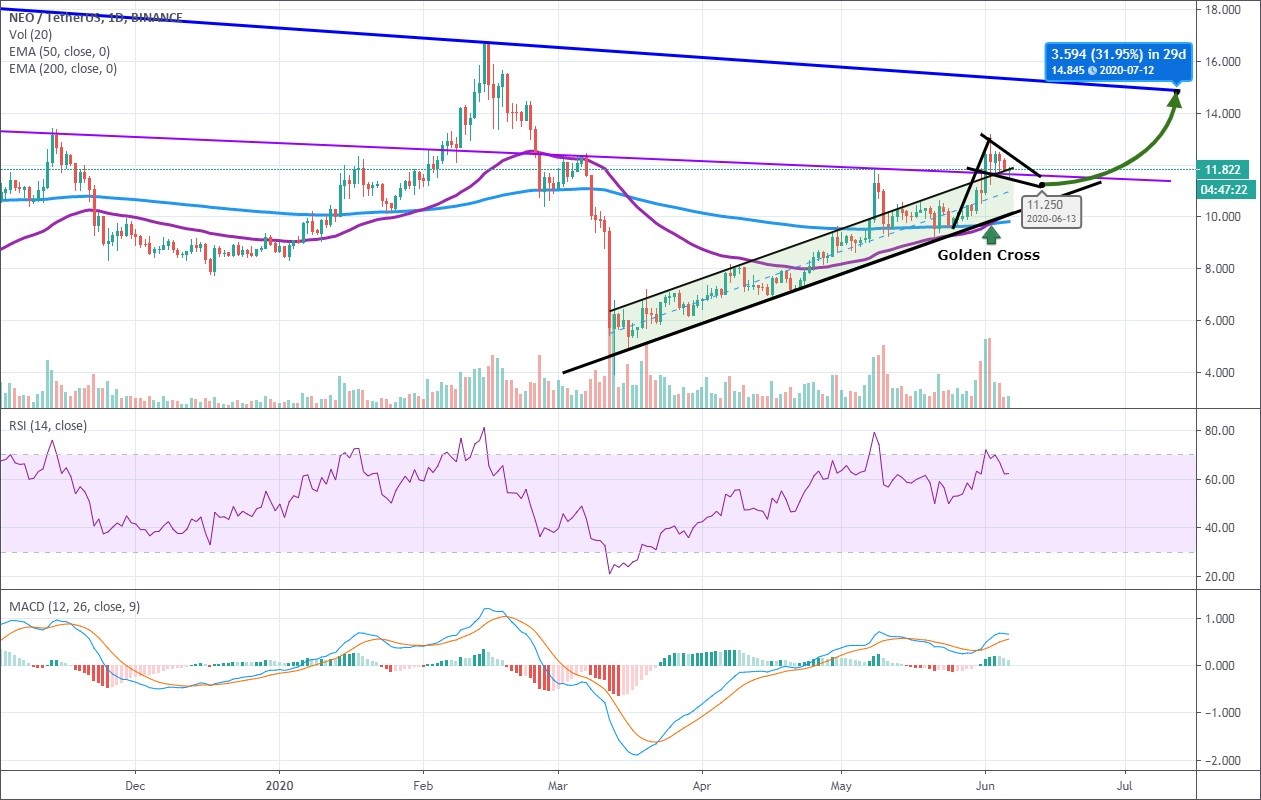 The first such obstacle came at the interim resistance (marked purple), that the price has successfully penetrated and is now going through the retest of the area at $11.8 as a part of the resolution of the bullish flag pattern. In doing so, the price has also resolved another pattern - the ascending triangle - to the upside. Although the ascending triangle is generally considered as a continuation pattern, in some cases, like here in the Neo market, it could also undertake the role of the reversal one. In any case, it puts Neo in the bullish context that is further amplified by the newly emerged golden cross that has proven itself as a reliable pattern in this particular market - last time it occurred, on February 1, the coin went on a 50% rally.

Right now, it appears that the bears are determined to defend the area above $11.7 as they are trying to force the price below the interim resistance. But the presence of the golden cross, as well as the fact that crucial oscillators (MACD and RSI) are bullish: MACD is above zero but displays the intention to cross to the downside; at the same time, RSI stays close to the overbought area but refrains from entering it. We predict that the bears will put a temporary hold on NEO’s upward movement but won’t be able to stop it altogether, so the price will continue aiming for the macro resistance level at $14.8.

Pushing up actively against Bitcoin

NEO has been performing strongly against Bitcoin since the beginning of May. It went above critical moving averages (50 EMA and 200 EMA) in two large swings, and is now preparing for a new one once the retracement is concluded. 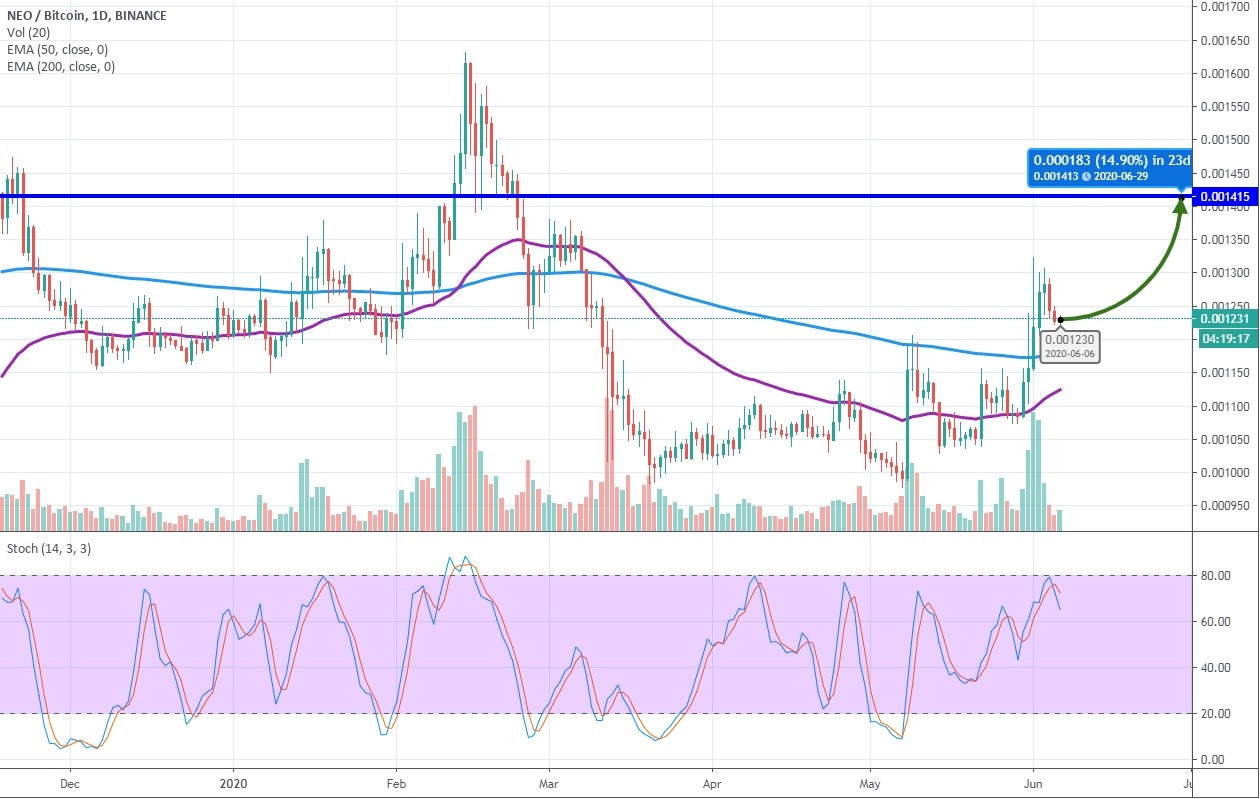 But most importantly, the path towards 141,500 satoshis is now wide open for NEO because there are literally no resistance levels strong enough to counter that move.