We all know Dogecoin as an open-source, peer-to-peer solution for seamless money transfers that first emerged as a pure joke, born out of an Internet meme. Although over the course of time, the travesty currency has transformed into a popular digital asset that is being actively traded on multiple cryptocurrency exchanges. So much so that even Elon Musk called Dogecoin his favorite coin on Twitter, though he was probably trolling the crypto community.

Nevertheless, DOGE is undeniably one of the top altcoins, which is being ranked 31th on Coinmarketcap - the coin has been holding this height for at least two years straight.

Last year wasn’t particularly impressive for DOGE since it failed to produce double-digit profits as of the year-end. The gains against USD amounted to a mere 2.61%, while the performance against Bitcoin was underwhelming with -53.8% gap. Ethereum had also outdone Dogecoin by 10%. Although DOGE did take part in last year’s bull market and even managed to hit the yearly ceiling of $0.0037 twice - first on April 4 and then on July 6 - the gains at both of these peaks constituted only 102%, while the other two mentioned currencies have outperformed DOGE substantially. 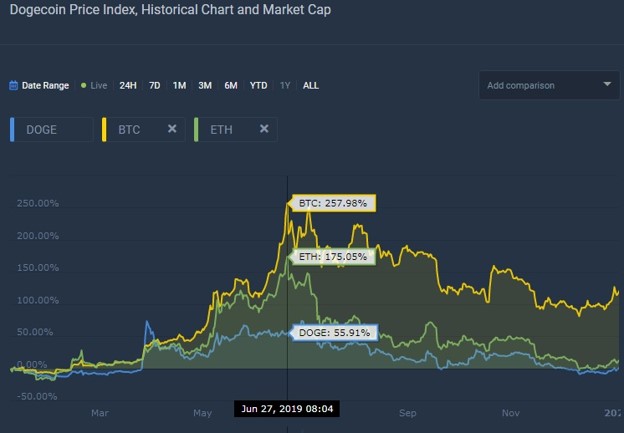 By looking at DOGE’s historical price action, we notice that the period from April 4 until July 10, after which the coin went in correction, was very uncharacteristic as the price maintained lower highs and consolidated for a long time, touched the yearly highs twice, and then began correcting quite smoothly. But on the all-time chart below, you can see that Dogecoin had never had a prolonged consolidation phase after a sharp price spike - it always went down abruptly before going up again. 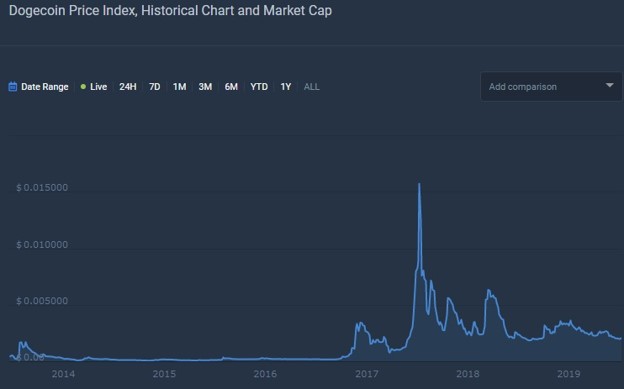 Besides, if we look at the bigger picture, it becomes evident that DOGE has had a cool-down phase during 2019, after a more than erratic price action that had taken place since the first quarter of 2017. This could mean two things: either Dogecoin has changed its behavioral pattern and will move much more smoothly from now on, or it’s gaining strength before going on another streak of crazy ups and downs.

The DOGE/USDT chart on a daily time frame clearly shows that the coin continues its movement within the confines of the falling trend, which has been lingering since last July, which is marked out with Andrew’s pitchfork on the picture below.

Although on several occasions, the price did break out of the green corridor in either direction, it has always been drawn back into it. Given that there are no plans for introducing radical technological improvements to the Dogecoin network in the near future, the fundamentals won’t be driving the price up, so the downtrend should persist in the medium term. Therefore, right now, there’s no point in going long on Dogecoin, at least until the price begins testing the pitchfork’s upper line.

However, trading DOGE on smaller time frames might be a good option now because, on the 4-hour chart, the price has recently broken through the descending triangle to the upside, which is a prerequisite for short-term gains. 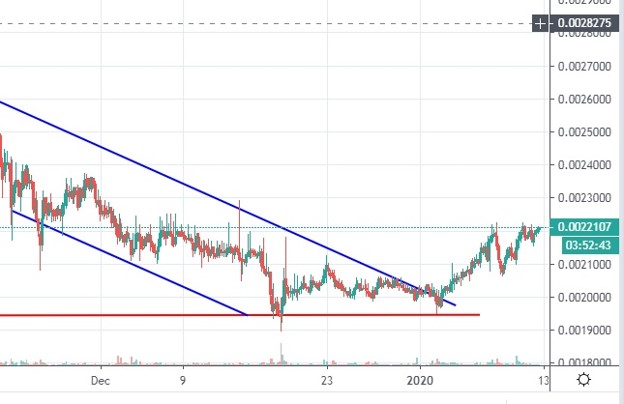 In the next few days, we should see whether DOGE establishes resistance at $0.0021; otherwise, the price could retrace all the way down to $0.00188.