Most people in the crypto community know Dogecoin (DOGE) as the joke coin — a cryptocurrency that was literally developed as a meme. Since then, the coin has gone through a number of challenges and difficulties, and against all odds and expectations, it still lives to this day, in 2019.

This is an even greater achievement if we consider the fact that the coin was launched in 2013, which puts it among the oldest living altcoins today. What's more, DOGE has gained so much popularity over the years, that it sits among the 30 largest cryptocurrencies at this time. While it is only barely on the list — currently ranking as 29th largest crypto — it is still there, which is impressive by itself.

It has a market cap of $283.7 million, and a daily trading volume of $46 million, while its current price sits at $0.002335. Also, DOGE doesn't have a limited total supply, meaning that the coin can be mined indefinitely. Its current circulating supply is $121.5 billion, and it will only increase as time goes by.

The first thing to note about Dogecoin's price is that it was never particularly high. At launch, the price was around $0.000559 per coin, and after a small surge that took it to $0.001389 in late January 2014, the coin dropped down to $0.0001. It spent most of the next three years fluctuating between $0.0001 and $0.0002, until mid-2017, when it started participating in surges that lasted throughout the year and resulted in the greatest highs that most coins have reached to this day.

For DOGE, the first real surge started in March 2017, and it took the coin to $0.004. After that, it dropped for a few months, until surging again, this time hitting its ATH of over $0.016. While this is still quite low for most other coins, it was a major achievement for DOGE. 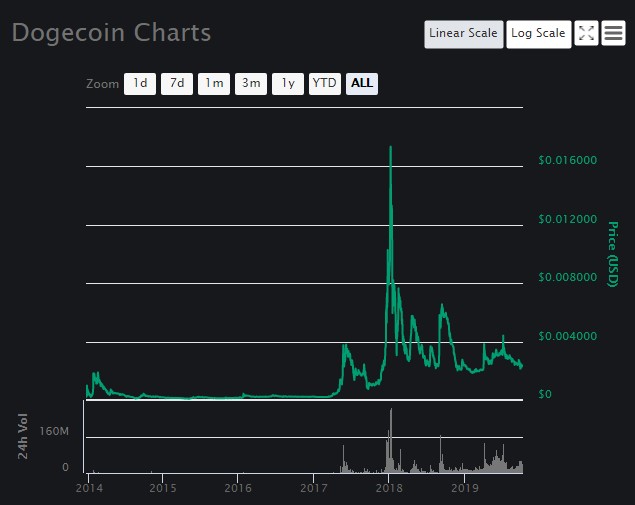 But, like all other cryptos, DOGE also dropped after the bear market hit, and Dogecoin dropped to a support at $0.002. This has been its strongest support since, and DOGE only breached it once, briefly, since then.

Interestingly enough, DOGE has a relatively good performance in 2019. It was not the top performer, definitely, but it did outperform more than one top crypto. It started the year barely above the support at $0.002, and it even briefly breached it at one point, in February. However, when Bitcoin surged on April 1st, DOGE followed.

Its price went from $0,002 to $0.004. It then saw a correction that nearly took it back to its former support, only to grow and reach $0.004 once more in early July. However, when the rally ended, and crypto prices saw correction, DOGE followed this trend as well, slowly but surely sliding down towards $0.002 once more.

It did not reach this level, and it definitely did not breach it, but it still sits closer to it than to its major resistances, such as the one at $0.003 or $0.004.

DOGE is definitely ready to grow should the opportunity to do so arrive, and while its price will always remain in fractions of cents, or even reach full cents, at best — the coin is currently relatively stable. As mentioned, this is quite surprising for a number of reasons. Dogecoin is a leaderless project since its founder distanced himself from it, and its unlimited supply is likely to lead to its doom in the future. But, the coin has survived for far longer than anyone had ever anticipated, so it may yet pull a trick or two more out of its sleeve.