Dogecoin, the currency that is loved by Shiba Inus worldwide, has been moving hand in hand with the rest of the altcoin market, although not as vehemently as some other coins. Nevertheless, the progress that the meme-currency has shown over the duration of the last month was far from being farcical. Those traders who had taken a long position on DOGE somewhere around mid-January could now have seen its value rise by 38% against the US Dollar and 12% against Bitcoin.

On the side note, judging from the fact that the Bitcoin dominance continues to be on the decline - its current level barely exceeds 61% - now seems to be the right time to extend the altcoin portfolio by adding Dogecoin, or supplement the existing DOGE holdings as the coin appears to be entering the phase of persistent growth. However, there is an issue that causes concern regarding its price behavior in the next couple of weeks.

Would DOGE’s pump turn end with a dump?

As the signs of the nascent altcoin season are getting more and more profound, there is no wonder that some cryptocurrencies put up unnaturally massive gains over a very short period of time. But the trick that Dogecoin pulled off must raise the alarm and make traders monitor the price action more closely. 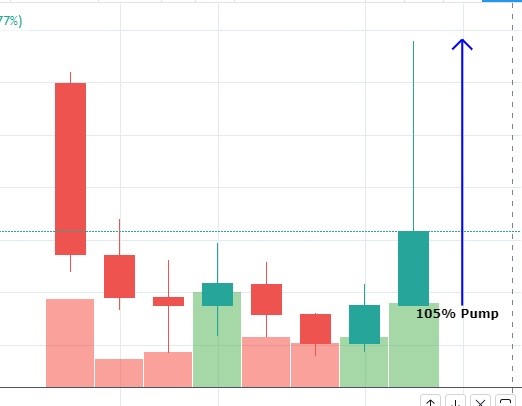 Last week, the market saw DOGE shooting upward like a cannonball: on February 9, the trading session opened with a slight gap at $0.0031 and closed at $0.0032, but during that time, the price went as high as $0.0048, forming an enormous inverted bearish hammer pin bar along the way, and extending the 14-period RSI way above 80. 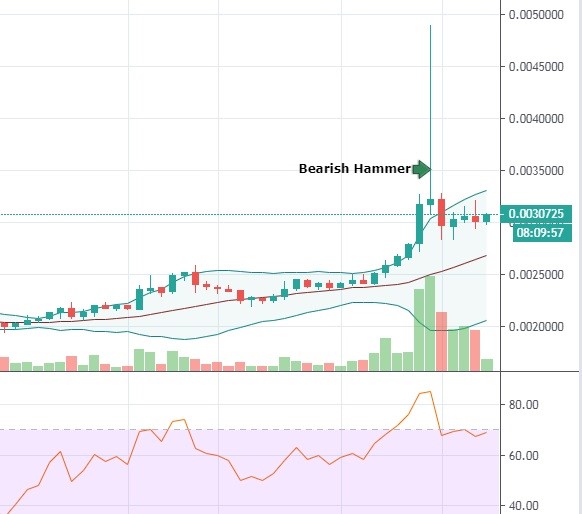 Naturally, the next candle showed the coin taking an even deeper dive to $0.0028, establishing the resistance, and then continuing forming what appears to be a bullish checkmate formation. The reason for concern is that after such a powerful display by the bears, the market could ultimately yield to this pressure and brake to the downside. Besides, the degree of extension of Bollinger Bands suggests that DOGE is still in the phase of high volatility, so if the pullback does occur, it could be a significant one - even down to the previous resistance at $0.0024. Therefore, it’s highly advisable to consider placing a not-too-tight stop-loss that could serve as a safety net in case of a price crash.

On the 4-hour chart, DOGE is now entering the Bollinger Band squeeze, which is a definite sign of approaching volatility. Besides, the price is now approaching the lower corner of the descending triangle, so we are definitely at the point of a breakout. 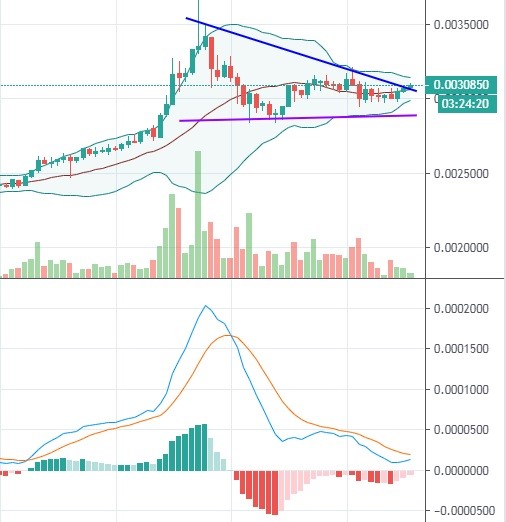 The concerns regarding the price dump are negated by the signs shown on MACD, where the signal line is about to cross over the moving average, with histograms shortening at a fast rate. Add to that the fact that the RSI is little above 50, thus being neutral; we could be looking at the beginning of another upward move on the part of Dogecoin.