Many perhaps wonder how a meme cryptocurrency could survive at least two notorious market crashes and still maintain the all-time return on investment of 350%. It comes to show that even the underdog, no pun intended, in the crypto space can put up great results and outperform the hyped-up cryptocurrencies with the ‘disruptive technologies that will make the world a better place.’

And when it comes to trading, DOGE is as good a cryptocurrency as any since it has been holding strong for the entire year, losing only 5% of its value from the beginning of 2019. Moreover, the Shiba Inu coin has already performed a full recovery after the so-called coronavirus crash while the neighboring currencies, such as Basic Attention Token (BAT), are still struggling to obtain that feat.

However, it doesn’t mean that the bright future lies ahead of Dogecoin because it remains buried deep in the downtrend. With no real fundamental improvements in sight for DOGE, it could only rely on Bitcoin to pump hard after the halving, and drag the rest of the market to the upside, too. But that presumption is a bit far-fetched, given the current condition on both traditional and cryptocurrency markets, which remain heavily dependent on the developments around the coronavirus pandemic.

DOGE gets a whiff of the bulls

The daily chart reveals that Dogecoin didn’t waste any time to recuperate after the massive dump. It must be said that DOGE had lost only 45% of its value during that time, whereas many other higher-ranked coins degraded by 60% or more - that’s one sturdy meme cryptocurrency here. 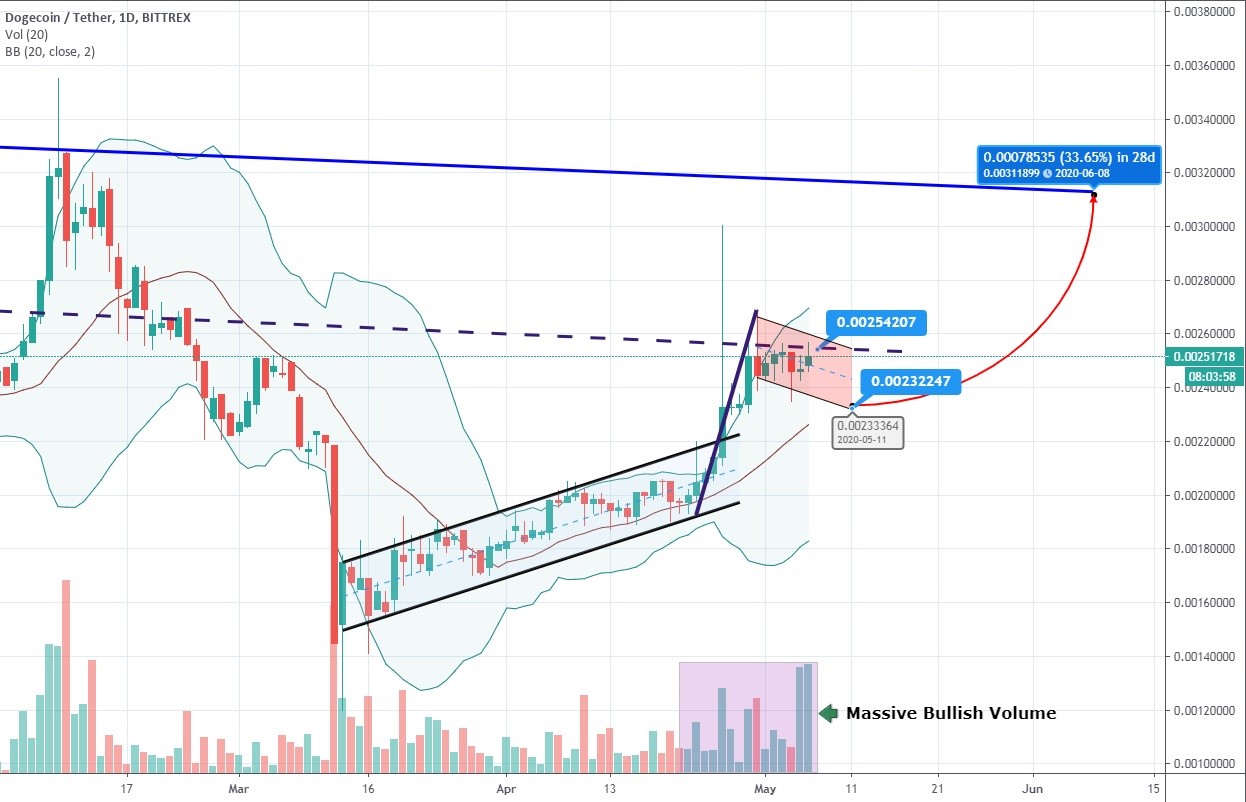 DOGE began climbing to the upside right off the bat, with no large swings, just moving in tranquility within the ascending channel. The real price action kicked in on April 22, when the hype around Bitcoin halving started gaining momentum, and the global outlook with regard to the COVID-19 pandemic became more or less optimistic. Right at that time, Dogecoin had a protracted dash to the upside that was stopped by the bears at the interim resistance level at $0.0025, the currency’s actual price at the time of writing.

The fact that the price stalled means that traders are most likely to witness the formation of the bullish flag, a continuation pattern which, if appropriately resolved to the upside, means that the price of DOGE could make an even faster sprint to the general downtrend resistance at $0.0033.

But before that, it could retrace to $0.0023, or to the middle line of Bollinger Bands, that would constitute a healthy development.

Also, note how massive has been the buying volume in the period from April 20 until now, and it has been on the rise, which signifies that there is something bullishly-flavored brewing in this market.

All in all, we expect that Dogecoin will retrace to the aforementioned price level and then enjoy the 33% price appreciation over the coming month. Upon that, there could be a prolonged period of consolidation before the attempt at the secondary downtrend resistance.

When it comes to the price action against Bitcoin, Dogecoin has literally nothing to hope for - the price has been in the downtrend for years, and with halving approaching, the only way for DOGE to go is southwards.