Chainlink one of the best performers in 2019

Chainlink (LINK) is one of the younger coins when it comes to the crypto industry, overall. It was launched about two years ago, at the time when the last big price surge of the year started, and since this was the same one that took BTC to $20,000 per coin, you might think that LINK launched at just the right time.

Unfortunately, that was not the case, and Chainlink's performance did not impress at all at the time. In fact, the coin did reach its ATH back then, but only for a while, and its price surpassed this height by quite a lot earlier in 2019.

As mentioned, Chainlink saw the launch in September 2017, with a price of $0.15. After only a few days, its price started rising slightly, and it reached $0,44 before dropping to original levels. Then, it finally started participating in the rally properly, exceeding $1 by January 12th. 2018. As we all know by now, the bear market hit right after that, and over the course of the next 6 months, LINK was back at its original low price of $0.15.

The coin spent the most part of 2018 fluctuating between this bottom and resistance at $0.5, only surpassing this level once in the entire year, and even that was back in November 2018, just before Bitcoin Cash hard fork.

The incident during the fork brought the second market crash in the same year, and Chainlink got affected this time as well, just as its price finally started to see recovery. It hit bottom once again in a matter of a week, although it managed to start growing slowly once more, which thus ending 2018 with positive price performance.

During the first few months of 2019, the coin's price was relatively stable, although it did see the smallest growth which led it back to its main resistance at that time — $0,5, After Bitcoin's first rally of the year on April 1st, however, LINK barely reacted. It did briefly breach its resistance for a day or two, but that was followed by a small correction that brought it back down. 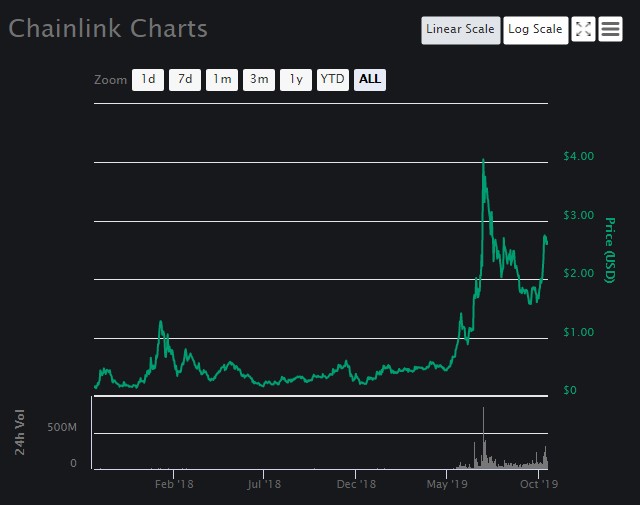 Then came the next big rally in early May, and this time, LINK simply exploded. The coin started breaching one resistance after another, including $0.5, $1, $2, $3, finally stopping at $4, which was its new ATH. Unfortunately, that is where the rally ended, and correction took place, forcing Chainlink to start dropping rapidly. The coin broke a number of resistances-turned-supports on its way down, getting its price cut in half along the way.

It finally stopped at $2, however, after which it tried to recover, only to drop once more and break this support in the final days of August 2019. However, it did not drop far, with its price stabilizing at $1,82. After that, it struggled to start another growth throughout September, and it finally got its wish come true in early October.

The coin surged once again in the last 10 days, breaching the resistance at $2, and almost reaching $3 in the process. However, it also ran into a smaller resistance at $2.7 along the way, which stopped its progress. At the time of writing, the coin's price is at $2.62 after a small correction, but it is currently once again seeing gains, with its price increasing by 1.89% in the last 24 hours. The coin is currently trading in the green against USD, BTC, and ETH.

What will happen to Chainlink in the future?

Generally speaking, LINK has been one of the best performers in 2019. It managed to reach its ATH from 2018, and even grow four times larger, which was great for its HODLers.

The coin is still strongly impacted by the market's overall sentiment, and it still follows BTC's lead, but the will and ability to grow definitely seem to be there. Its price right now is much higher than where it was at the start of the year, which is not something that can be said for every crypto. It appears that LINK does have quite a lot of potential, and it is worth keeping an eye on in days to come, especially if the year ends with a rally, as many expect it will.