LINK is certainly the coin that hardly caused traders and investors any frustration as it kept 443% of the gains from 2019 - the year when this coin has earned itself a status of the star cryptocurrency whose characteristics from the standpoint of technical analysis were superior to that of Bitcoin. Interestingly enough, the coin has reached the all-time high at $4.95 just nine days before the infamous market crash - what a shorting opportunity that must have been!

Nevertheless, LINK appears to have come to its senses and began chugging steadily to the upside, gaining 38% in the last seven days. But the cryptocurrency market, in general, is still way too unstable even to begin entertaining the possibility of the uptrend emergence, but traders should seize this opportune moment for some swing trading.

LINK has gone through all pain points of this ultra volatile phase of a bear market - from a massive 65.5% price drop, followed by the prolonged consolidation, to the sluggish recovery that has been incentivized lately by the wind of optimism blowing from the traditional markets. 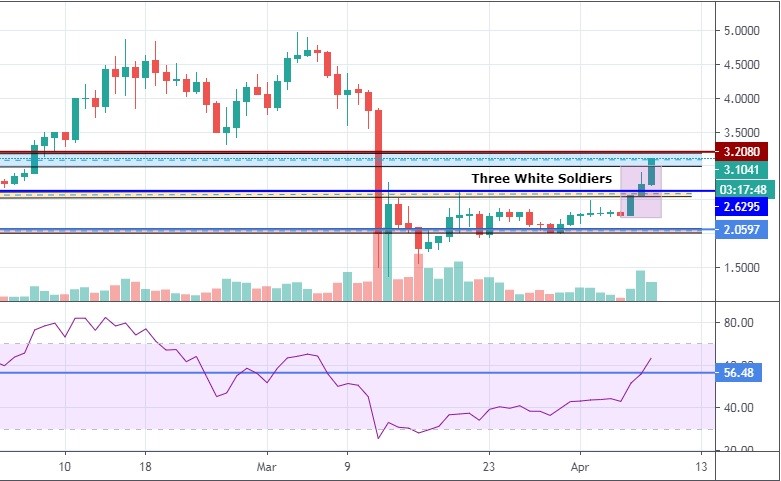 Over the course of the last upside move, LINK has relatively easily broken the resistance zone at $2 and set the course to a zone between $3 and $3.2, with which the price had interacted frequently in the past several months. At the same time, the coin has climbed atop the 50-period EMA - a mild sign of bullish inclination that has to be confirmed or declined with the next daily candle. Another bullish sign that is currently finalizing its formation on the daily time frame is the three white (or advancing) soldiers candlestick pattern that traditionally marks the reversal of a downtrend. This pattern is being confirmed by the 14-period RSI, which is now moving upward confidently, having passed a very strong resistance level at 56.48.

However, these signals should be viewed with extreme caution because Chainlink is still deep down in the bear-dominated zone, plus there is a high probability of this lucrative price action being the result of a sophisticated manipulation aimed at shaking off the nascent independent traders. There is absolutely no possibility for LINK to go on a fully-fledged uptrend in the present circumstances, so the current price action could end up forming the lower high at $3.2, after which the 11th cryptocurrency would give way to a steep correction to $2.05 or even lower.

The most optimistic scenario sees Chainlink hitting the ceiling at $3.2, retracing to $2.8, and then consolidating in that area for the next week -a week and a half.

Having analyzed the order flow, we arrived at the conclusion that the largest block of limit orders - with each order being at least 10,000 LINK - is located at $3.15, with the size of order increasing at the higher levels. This means that the sellers do not intend to let the price go higher at this point.

The largest block of buy limit orders, with the biggest order being 17,000 LINK, sits at $2.9, which points to the fact that the market participants are squeezing the price range, thus giving a clear sign of imminent consolidation at the said levels.