Chainlink (LINK) has long been considered as a prime candidate for a place in the top 10 that could supersede the poorly performing cryptocurrencies, such as Litecoin (LTC), Ripple (XRP), and EOS (EOS). The price action of the coin that represents an oracle network for Ethereum smart contracts managed to maintain its bullish stance despite the coronavirus crash. During that time, LINK suffered a serious blow that had momentarily pushed the price close to $1. However, the way Chainlink coped with the crisis shows immense resilience of the ERC-20/ERC-223 token, as well as the dedication to the uptrend, which is about to resume, should LINK establish a new higher high above $5.

The daily chart below shows that the March market crash forced Chainlink to leave the confines of the ascending channel only for a short period of time between March 15 and April 1. The bulls took little time to consolidate their powers, which was enough to ignite the buying activity that pulled the price right to the interim resistance, now support, at $4. 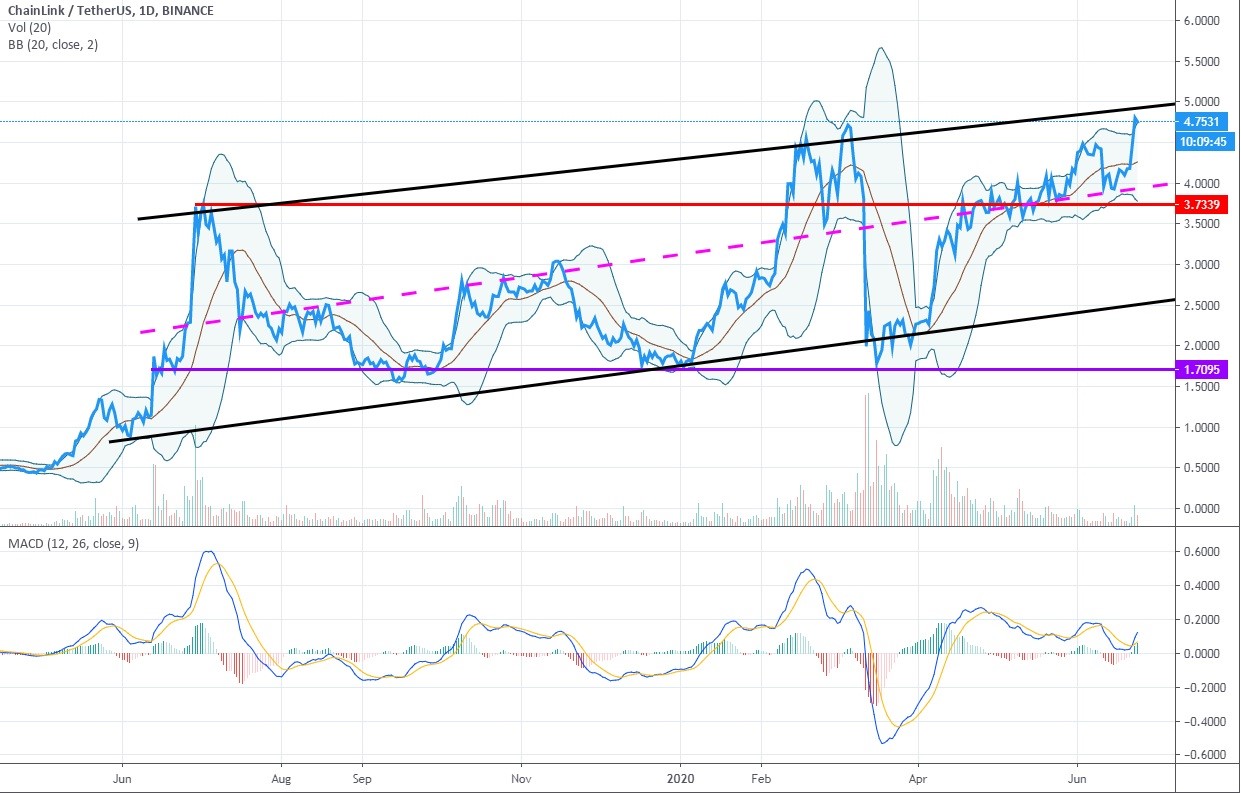 This interim support line plays an essential role at this particular junction as it confirms that the bulls are not willing to let the price slide below $4, thus endangering the general uptrend structure. There is also an important horizontal resistance at $3.73, which is the last outpost towards which the price could potentially drop yet continue to adhere to the overall bullish vector.

The analysis of the immediate situation on the daily time frame tells us that the price approached the resistance, the resolution of which to the upside would constitute an appealing entry point for a long play. 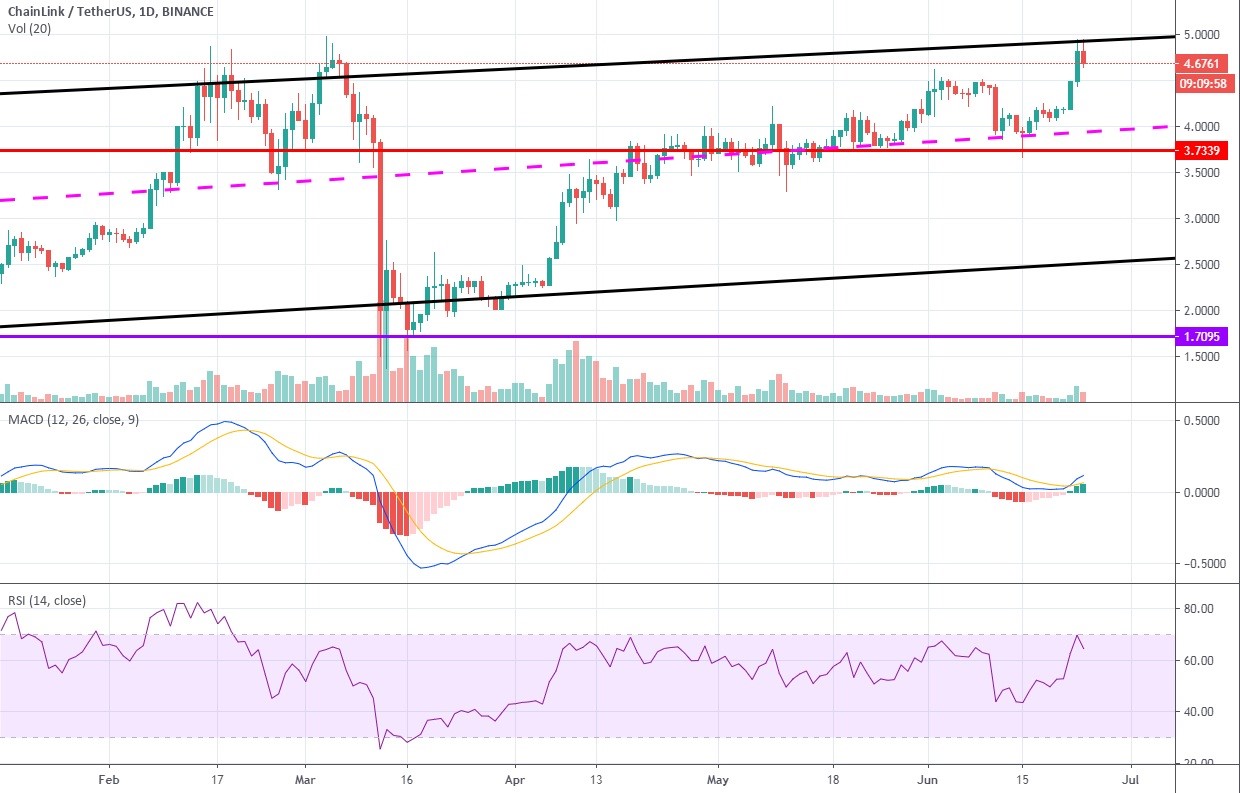 As you can see, the price has already tested the resistance at $4.91 but got rejected. Now the bulls are trying to pressurize LINK in the direction of the last day’s close at $4.48, and in doing so, to weaken the buying activity.

The 4-hour time frame provides a clearer picture of the ongoing activities in the market and offers some hints as to how the present situation could resolve itself. Traders could have predicted the turning point of this bull run thanks to a doji candle that signaled about the indecision and the beginning of the retracement. 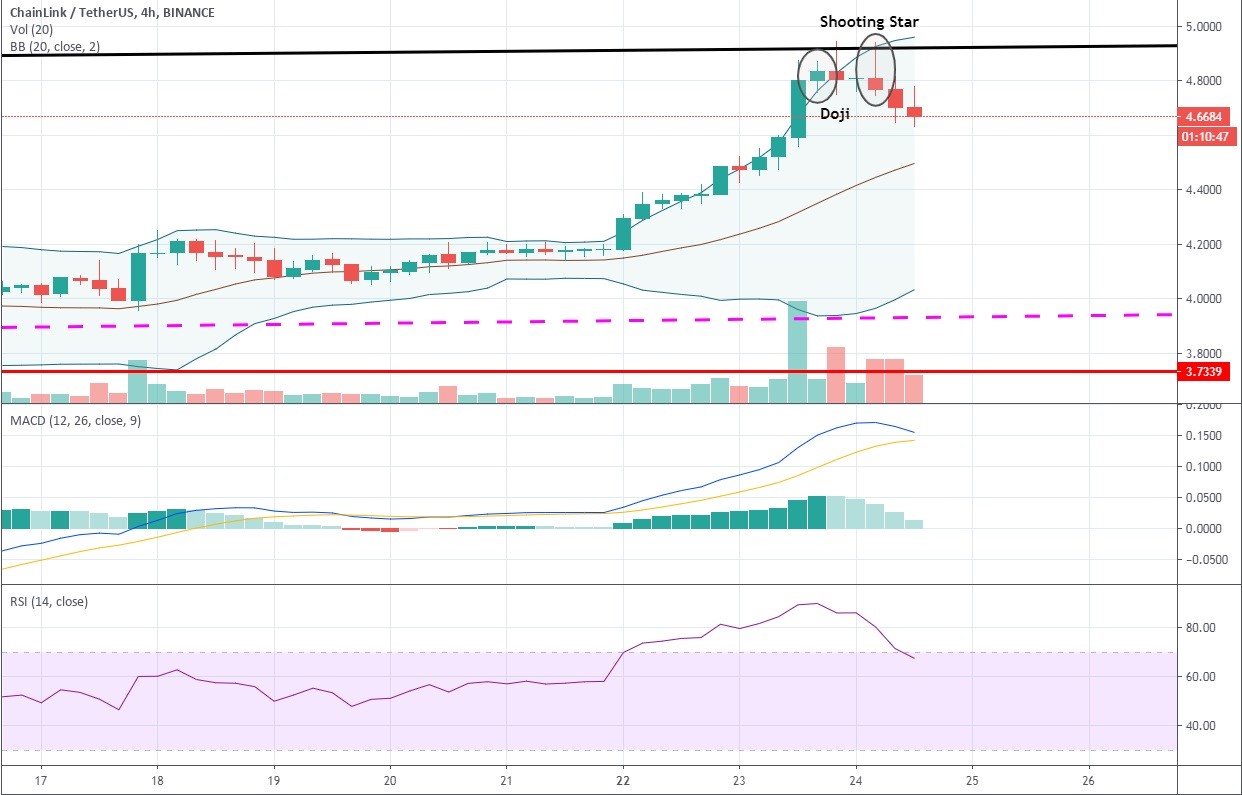 The presence of the shooting star candlestick suggests the possibility of a considerable pullback on this time frame, during which the price could have a drop of 5% to 10% over the next two to five days.

Traders who are only deciding where to enter the market must pay close attention to MACD as it will show whether the price is in for a significant pullback, possibly to $4, or would it end up making a healthy retracement and then have another attempt at $4.91. Our LINK price prediction is that traders are to expect the dip below the middle line of Bollinger Bands to $4.2 - $4.4, a suitable place of entry for aggressive traders who plan on going long, at which point the bulls are going to get back in the driving seat and start aiming for $5.