Last May was the time when Chainlink came into the limelight and to the top of global rankings, as it had engaged in an aggressive bull rally, which since then became a characteristic feature of this cryptocurrency for the decentralized oracle service. However, steep corrections are also inherent to LINK as the price keeps on being pulled down to the same level at $1.7, which now serves as long-standing support. Therefore, despite the overall positive outlook regarding this coin and its immense potential for gains, we would refrain from putting Chainlink in an absolutely bullish framework because its price behavior is still slightly erratic, and very volatile in both directions, as the massive highs are consistently being followed by the equally deep troughs. But out of all top altcoins, LINK is the most promising one, and surely a clear candidate for replacing Litecoin, and perhaps Bitcoin Cash and Bitcoin SV, at the very top of the ranking table. 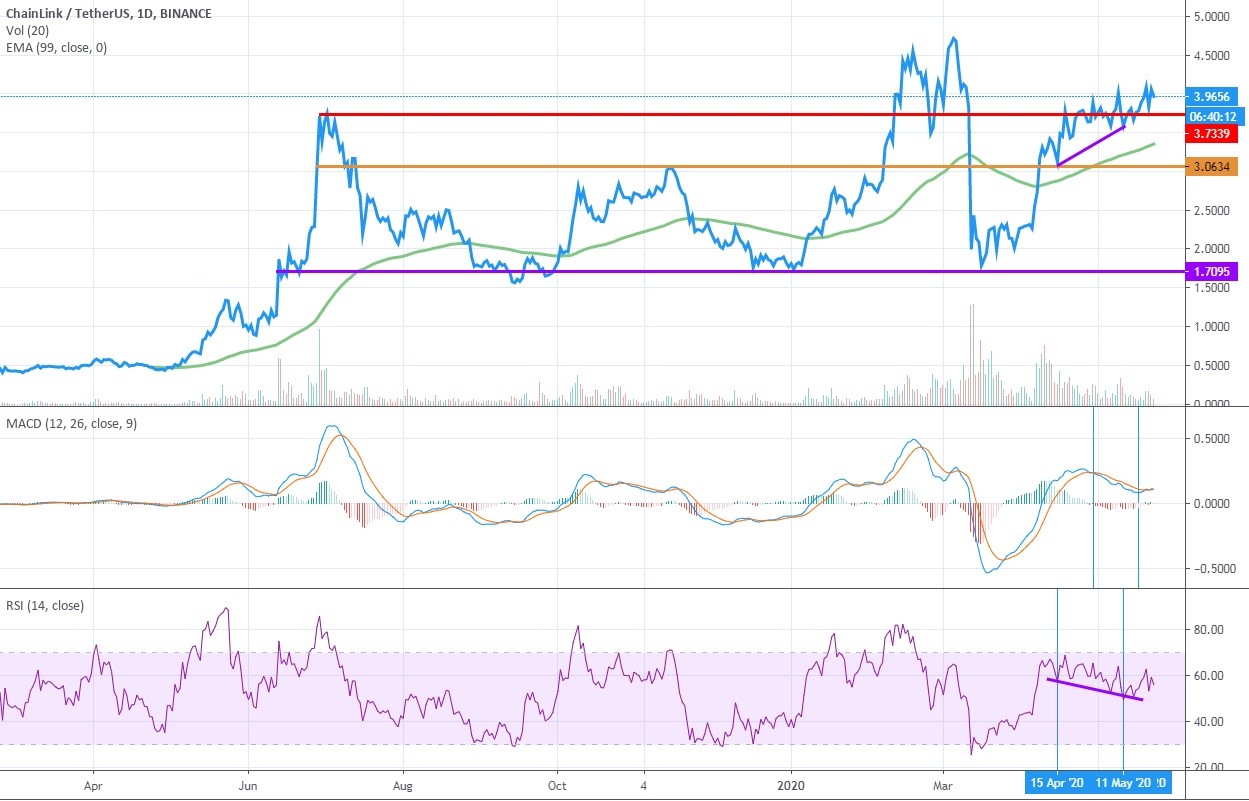 Right now, staying above $3.73 is of the essence for Chainlink because, in doing so, it would establish a foundation for the move above $4.7, its greatest achievement so far, and in the direction of the new all-time high. At the moment, the coin seems to be coping with that task quite well, being priced at $3.97, as of the time of writing. But, as we have already noticed, LINK displays proclivity to making deep troughs after each substantial price appreciation, so the possibility that the price would become bearish in the coming two-three weeks must not be disregarded. Even if Chainlink would go above $4.7 and establish a new high, we expect that the price would ultimately retrace back to the area between $$3.8 and $4.1.

The moving averages profile is bullish, with particular emphasis being placed on the trend-setting 99-day EMA and 200 EMA. These moving averages are currently heading northward with the price staying above them, a clear sign that at this particular moment, the bulls are having their say in that specific market. The bullish notion is also supported by the fact that MACD has been above the zero line since the middle of April. But the very same MACD shows a worrying sign for those who plan to enter a long trade.

Notice how the indicator went bearish right after the price penetrated the resistance at $3.73 for the second time, all the way through to the price level at $4.1, whereas the price made a new high. The MACD divergence isn’t considered a reliable trading signal in itself, but when combined with a similar divergence on the 14-period RSI, which began to emerge even earlier, back when the price was testing the support at $3.06, it raises concern.

This is the first time when such clear-cut divergences emerged simultaneously on both indicators, the factor that influenced our prediction, in accordance to which we expect a significant pullback in the coming days that will take Chainlink below the 99 EMA and quite possibly, to the support at $3.06, thus marking a 23% negative move from LINK’s current position - the move below that level is improbable. The rise to $4.5 - $4.7 would mean the cancelation of the bearish scenario and the reviviscence of bullish agenda.