Cardano (ADA) has been rallying ceaselessly since the middle of March when the whole market had plunged as a result of the panic caused by the COVID-19 pandemic. The foresighted traders with profound knowledge of Cardano’s competitive fundamentals should have used that opportune moment to take a long position on ADA and offload it 378% to the upside later.

We have already covered the basics of this coin’s fundamental value in our previous ADA price forecasts, so this time, we offer only a quick update on recent developments.

On July 7, the team announced that the code for the Shelley upgrade is to be made public on a corresponding tech platform that stirred a lot of excitement in the community.

Apparently, the code and the overall notion of the approaching upgrade were received favorably by the ADA holders and traders alike as the price has had another 65% bullish impulse during the period between June 28 and July 8, when it reached the climax at $0.133 and, presumably, transitioned to the state of correction.

Have the bulls finally run out steam, or would the rally persist?

The weekly chart below illustrates how confident and extended was the path of Cardano the upside in the last few months. After the market crash, the price of altcoin had taken a prominently bullish stance that must have brought loyal traders plenty of profits. 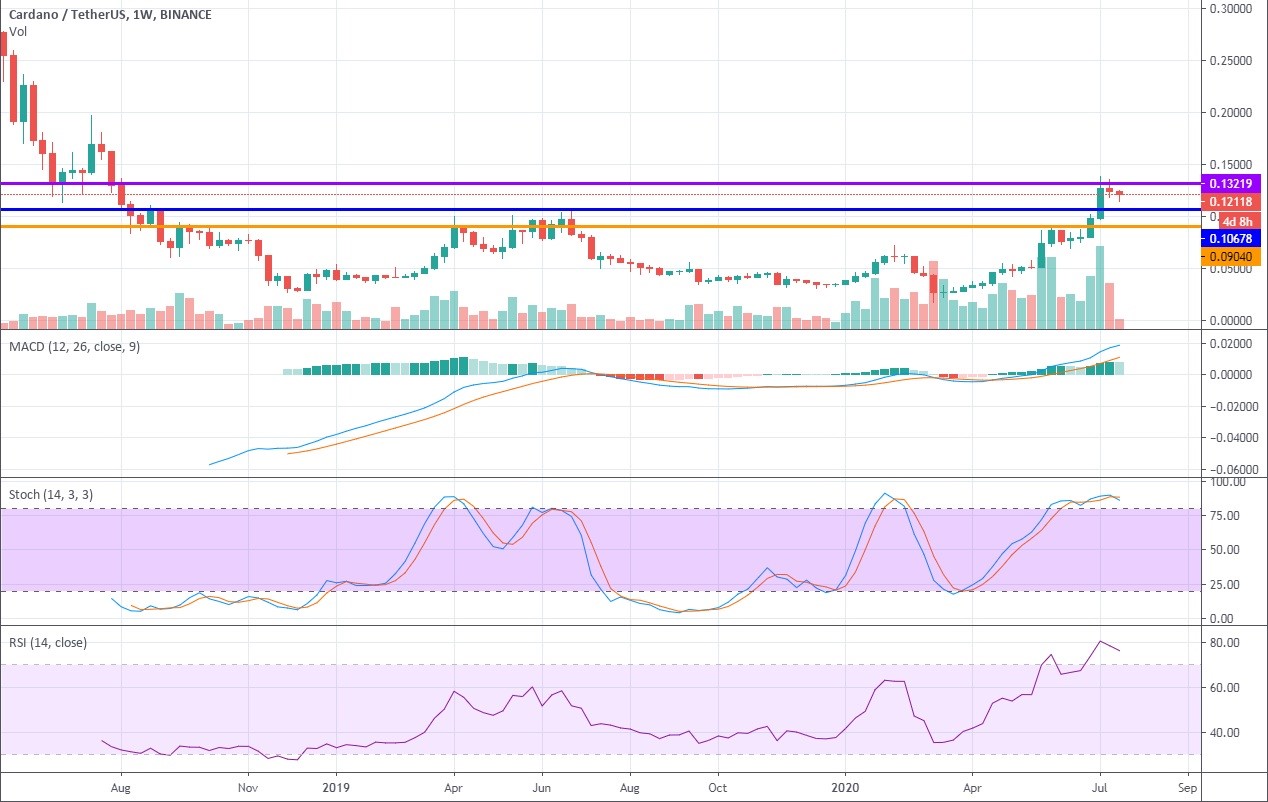 Frankly speaking, this has been arguably a display of the most aggressive bullish push to the upside throughout the entire market, rivaled only by that of Elrond (ERD) and Chainlink (LINK). A 65% frog leap in just 28 days is quite an accomplishment for a veteran cryptocurrency that has finally broken into the top 10 ranks and settled at the 7th spot, with the improved market capitalization of $3,1 billion.

However, our ADA price analysis tells that the time of trigger-happy bullish action is up as the price got rejected near $0.133, the level that served as support during the landslide price action in August - November 2018. We believe that the bears have finally managed to disrupt the momentum because, for the first time since the inception of the rally, we see the red weekly candle opening below the close of the previous candle, which is a sure sign that the buyers are weakening their grip on the market. The showings of key indicators also confirm this notion:

In conclusion, ADA is finally getting a much-needed break from bullish efforts and will retrace to the determined support levels at $0.12 ( a moderately bearish scenario) or $0.09, should big players decide to offload more “passengers” before resuming the uptrend.