IOHK, the company led by Charles Hoskinson, who, along with James Wood, is responsible for the creation of Cardano (ADA), is one of the few blockchain enterprises that work relentlessly on improving the fundamentals behind the coin, and with a great deal of success. Naturally, their hard work pays off with ADA’s rapid price appreciation over the course of the past 30 days. To be more precise, the value of Cardano increased by 59.3% against USD, 31% against Bitcoin, and 7.2% in comparison to Ethereum’s price action. With that kind of progress, ADA could easily get a bump in the global rankings and get in the top 10, along with Chainlink (LINK), driving out the likes of Litecoin (LTC) and Ripple (XRP) that seem to have lost their mojo.

One step closer towards Shelley

Just like Ethereum, Cardano has set itself a goal to make 2020 the year of fundamental breakthrough that could make it the most efficient and the most centralized blockchain in the space. That ambitious objective will be achieved through the all-encompassing upgrade of the current network version, called Byron, to the one dubbed Shelley that will allow for receiving staking rewards and running staking pools to support the future mainnet, in addition to the vastly increased transaction throughput and the obtainment of an unparalleled level of decentralization.

A few days ago, Charles Hoskinson announced that the first-ever block (zero-block) in the Shelley testnet had been generated on April 25. This event marked the launch of the closed beta-testing, which, in turn, could have served as a fuel for ADA’s massive price gain of 40% against USD and 20.4% against Bitcoin in a matter of a week.

The expectations of traders and holders, regarding this technological upgrade are running high, to the extent that the globally renowned agencies rated Cardano’s solution, and the process of its adoption, as excellent, whereas Ethereum and Bitcoin turned out to be just “good.”

Taking all these factors into account, we reveal that our mid and long-term ADA price prediction is bullish, with a high probability of its price renewing the 2-year maximums at $0.1 and ultimately going as high as $0.12 by the tail end of 2020.

The positivity that comes from fundamental improvements is now multiplied by the hype that surrounds the Bitcoin halving, which is due to happen in three weeks. Thanks to that, the price of Cardano has been growing ceaselessly since April 20. 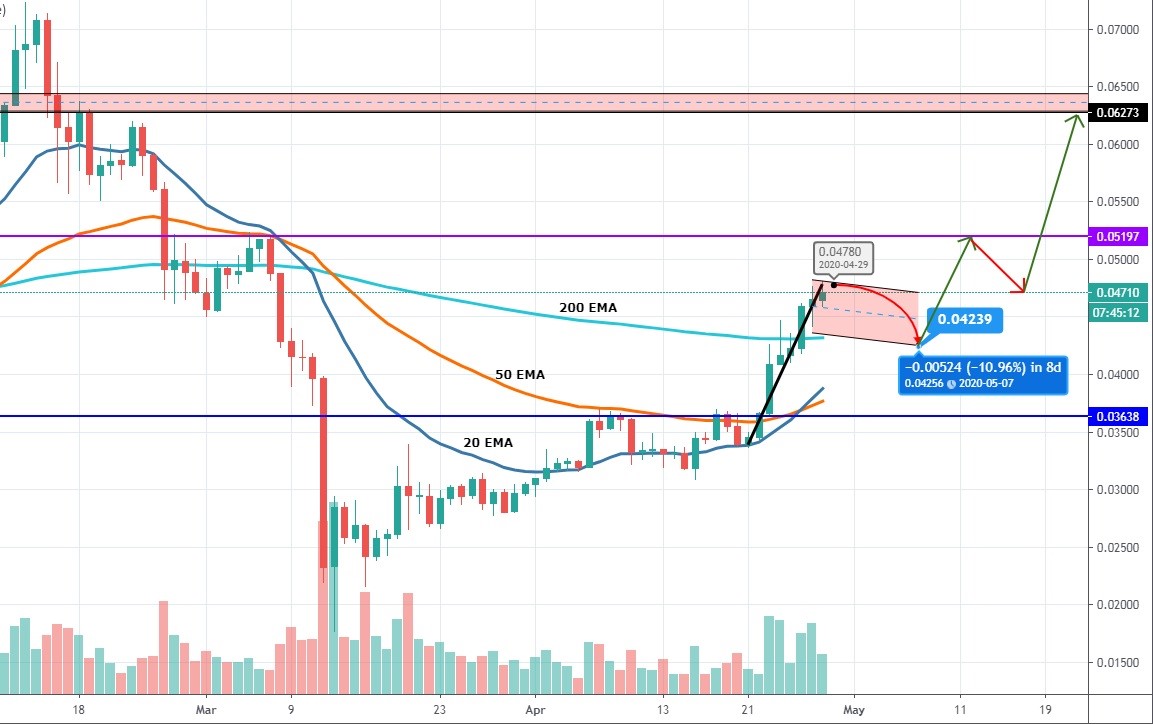 During that time, ADA has penetrated through all three crucial exponential moving averages and is now looking to settle above the 200-period EMA, thus confirming its intention to go bullish. We expect that the upcoming retracement will create a bullish flag, with price sliding restfully to $0.0042. The next price target is going to be $0.051, which is a firm historical resistance, although ADA’s ultimate level for the next two-three months is $0.062, breaking which will open the road to a fully-fledged secondary bull market. 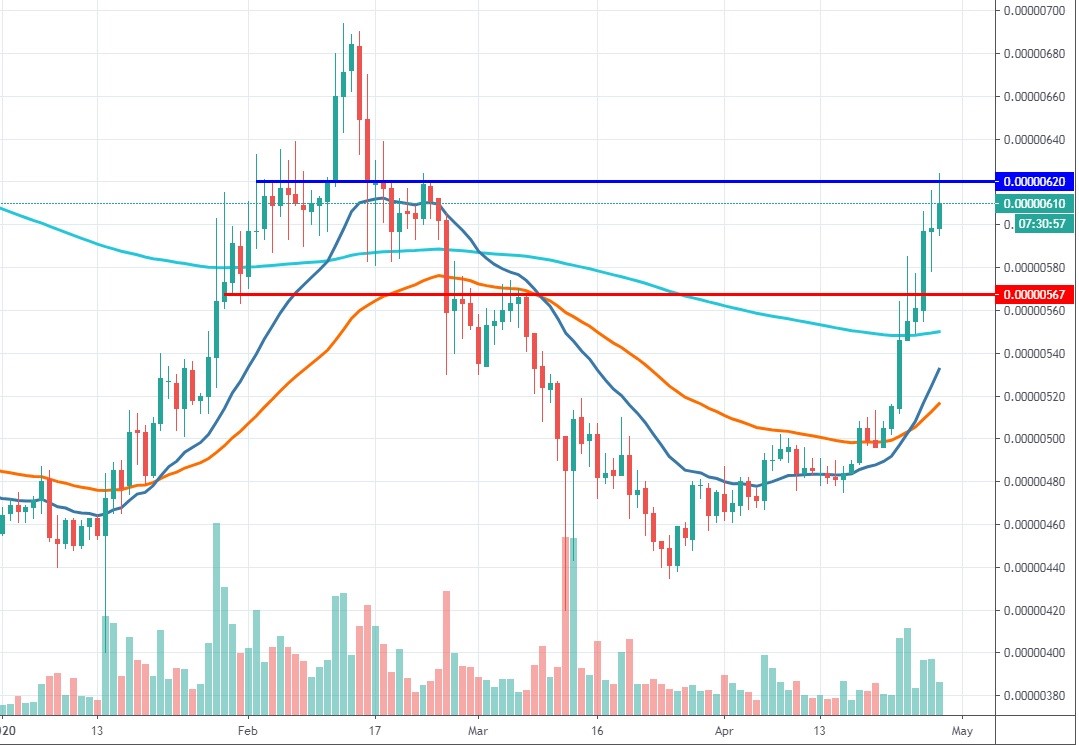 The situation in the ADA/BTC market holds an even greater promise for the altcoin as the price has already begun testing the local high at 6,200 satoshis, although here we also expect a pullback to 5,670 sats before it can make a run for 7,000 sats. In this trading pair, the outlook is even more bullish as the EMA’s are hinting at forming the golden cross.