The financial world has entered the state of turbulence due to the seemingly unstoppable spread of coronavirus and the new chapter of oil war, initiated by Saudi Arabia and other members of the global oil-production conglomerate. Unfortunately for the cryptocurrency holders, this market hasn’t managed to steer clear of the multiplying disasters in the real sectors of the economy. The altcoin season is already a distant memory as traders now have to deal with the daily challenges presented by the amplifying bear market.

Cardano (ADA) also couldn’t escape the plight of the market crash that began in mid-February and, since then, has only been gaining momentum. As of the time of writing, the total market capitalization of the cryptocurrency market receded by 2,73% in the last 24 hours, accompanied by an even more significant decline in total trading volume (-18.2%) over the same period of time. 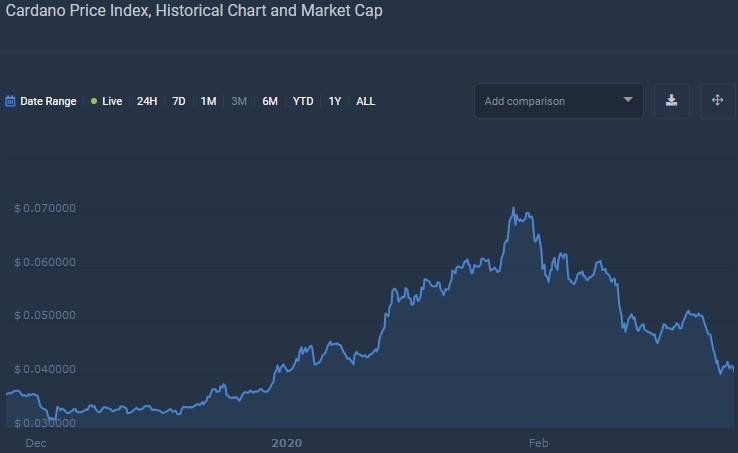 All these unfortunate occurrences led to Cardano transforming from one of the most attractive gainers on the market to an ordinary loser coin, which depreciated in value by 32.52% in a month and 17.44% over the past seven days. So much so, that even the launch of the much-anticipated sharding technology, dubbed Hydra, didn’t move the price of ADA even by the slightest bit.

There is no need to go at length about the actuality of the scalability problem for the entire realm of blockchain. Basically, it’s one of the main obstacles on its way to global recognition and mass adoption. On March 9, after the long five years of development and trial runs, Charles Hoskins, the founder and CEO of IOHK, and the co-founder of the Ethereum Foundation, announced the official roll-out of the second-layer scaling solution named Hydra.

In a nutshell, Hydra will employ the so-called heads, which constitute the part of stake pools, with each head being capable of handling up to 1000 transactions per second. Therefore, with as many as 1000 heads (pools) available, the upgraded Cardano network should be capable of handling 1 million transactions/second, while doing it off-chain thanks to the state channel sharding, thus relieving the main blockchain.

Hydra is out - the price is down

In any other situation, the introduction of such a massive and immensely important upgrade would have sent the price of ADA skyrocketing. But in the current circumstances, the 12th cryptocurrency didn’t even flinch. On the contrary, it had opened even lower the next day after the announcement. 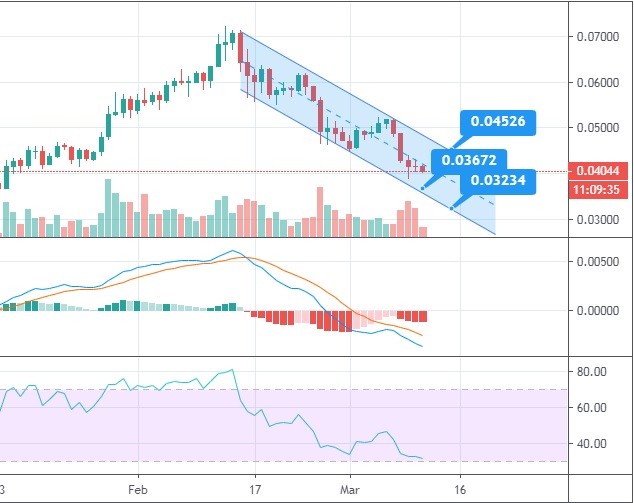 On the daily chart, the price of ADA continues to move accurately within the regression trend, with the next lower high expected at $0.045, which is an optimal area for making a sell at this point. In this scenario, the next lower low should be made at $0.032, and constitute a buy range. However, judging from the fact that Cardano hasn’t even reached the oversold region yet, and MACD is moving further south, traders should consider the scenario when ADA first makes the lower low at $0.036. 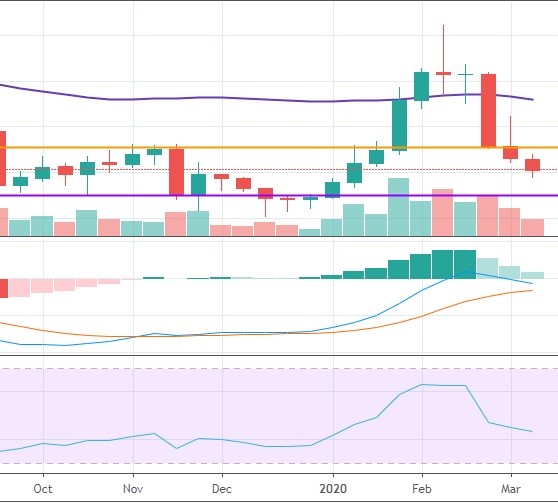 The situation on the weekly time frame also doesn’t instill optimism since the price has already fallen underneath the 50-period MA, as well as the resistance at $0.045. Given that MACD lines are about to make a crossover to the downside, traders could expect the coin to slide lower to $0.034 in two to three weeks’ time.