Binance Coin (BNB), the native coin of Binance cryptocurrency exchange, is one of the rare coins that saw launch back in 2017, but reached its all-time high (ATH) in 2019. In fact, it is arguably one of the best-performing coins in 2019, particularly in the first half of the year.

After its launch in 2017, BNB did not see an instant rise to popularity. It started its surge relatively late, compared to other coins, only starting to grow in mid-December 2017. It then reached its highest around mid-January 2018, when it climbed up to $25. After that, it crashed down to $5, and throughout the first half of 2018, it once again saw a slow rise, despite the crypto winter and the bearish market. 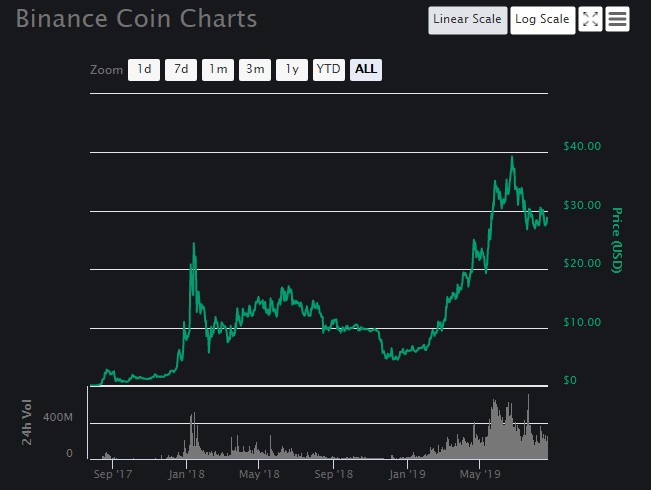 Its growth ended sharply on June 23rd, when the coin started seeing a price drop, sinking deeper and deeper, until it was back to $5 after the second market crash in November, which was caused by BCH hash war. The situation calmed down after a few weeks, which is when BNB started gaining real momentum.

The coin started growing in mid-December, and it pretty much did not stop until June 2019. While its price was barely above $5 by the time 2018 had ended, BNB was at the beginning of the largest and sharpest rise in its short history.

As mentioned, BNB started surging rapidly in early 2019, Its price doubled by late February and tripled by mid-March. By the end of April 2019, BNB price was five times larger than the one it had in January, and still surging. The growth was quite steady, and the coin ended up reaching its ATH on June 22nd, with a price of $39.27 — around eight times above its price at the start of the year. 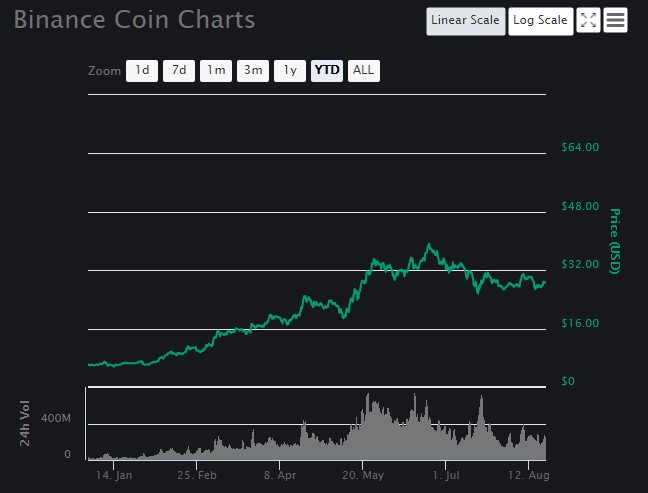 However, this is where the crypto market started seeing a decline, which affected BNB as well. The coin did not experience as sharp a fall as others, but it still dropped by around $13, sinking down to $26 by mid-July. Ever since then, it was making attempts to surge again. However, a strong resistance level at $32 has been preventing it from doing so, and it mostly fluctuated between this resistance and its support at $27 for the past month.

Why did Binance Coin perform so well?

As stated, Binance Coin is the native cryptocurrency of Binance — the world's largest exchange by trading volume. Binance itself saw a lot of progress in 2019, likely more than any other project.

As soon as the year kicked off, Binance started announcing subsidiaries and other projects. It brought back its Binance Launchpad — a platform for holding token sales, where the exchange would do a background check on tokens and start offering legitimate ones, thus starting an entirely new token sale model — IEO (Initial Exchange Offering).

It also launched several fiat-to-crypto exchanges, including Binance.Jersey, Binance.Singapore, and Binance.US. It also launched its own blockchain, known as Binance Chain, as well as its own decentralized exchange — Binance DEX.

The project that allowed BNB to start growing was undoubtedly Binance Launchpad, as the coin became the only way to purchase tokens that Binance was offering. This gave it an additional use case and value as a consequence of demand. Not to mention that it is a native coin on both, Binance and Binance DEX, and it offers discounts on trading fees. BNB even managed to decouple from Bitcoin, meaning that it stopped following its lead and copying its performance — something that pretty much all other coins still do, which is why it started rising before the bull runs took over a few months later.

Where will BNB go from here?

It is difficult to say what to expect from BNB in the future. The coin became strong and maybe even independent, which was proven by the fact that it completely ignored the hack of Binance's hot wallet.

However, it seems to still be affected by the current stalemate in the crypto space, which can be seen by its performance in the last month. The coin is locked between a support at $27 and a resistance at $32, unable to break any, so it just keeps going up and down between them. Considering this, it is likely that the coin will surge as soon as it gets an opportunity, likely trying to once again reach and exceed its ATH.

Binance is certainly doing well, and the coin is, too, and the only thing stopping it is the same thing that is keeping BTC between $10,000 and $11,000. Once this period passes, BNB is likely to skyrocket once again, and continue its top performance of 2019.