Before the March capitulation, Binance Coin was considered as one of the most prominent gainers among top cryptocurrencies as it had been displaying continual growth throughout the entire 2019 and the first couple of months of 2020. But now, arguably, the most popular exchange coin is struggling to make its way back to the pre-crash levels.

After being pushed off the cliff by the panic sellers who reacted to the COVID-19 pandemic, BNB lost 69% of its value in a cascade of red candles and found the bottom below $10. After having shaken off the initial blow, the price began a slow but the overall healthy recovery in a series of mild upswings and moderate retracements. Everything was lining up for BNB to make a confident return back to the level above $20, but the bears decided otherwise. 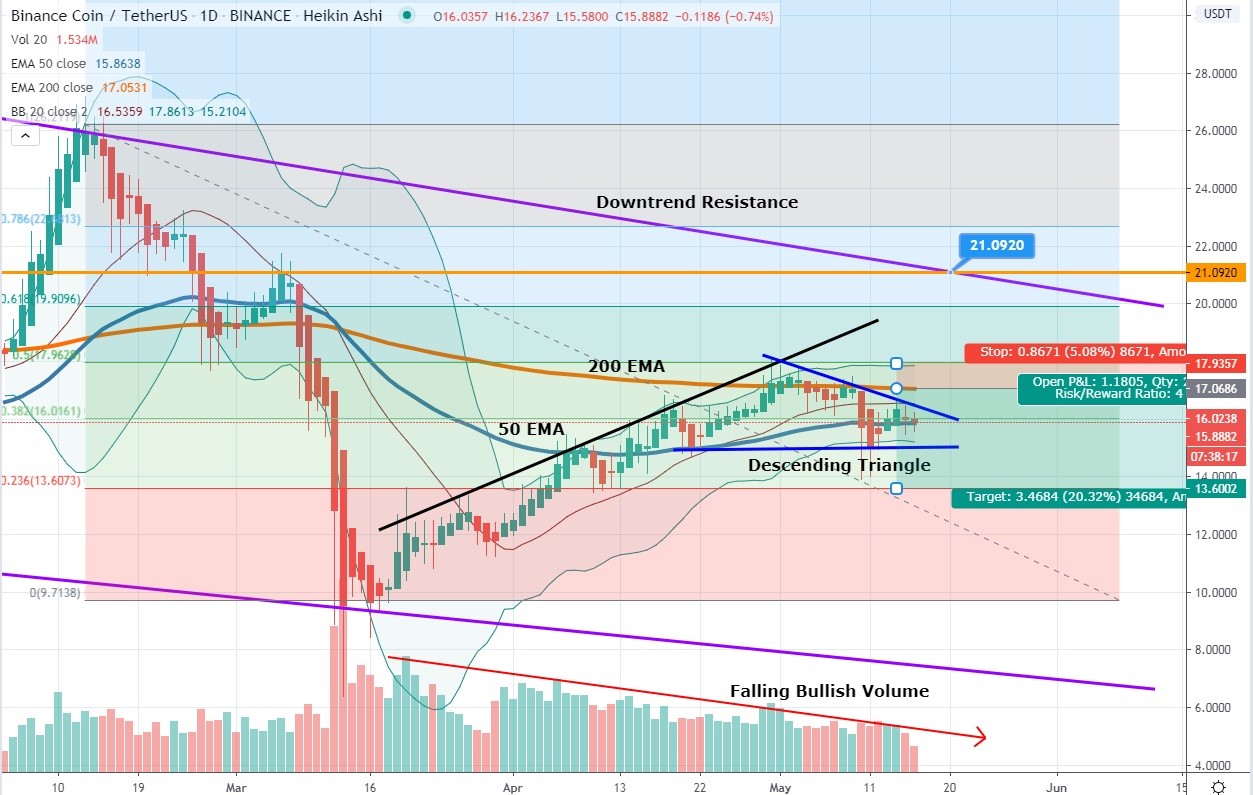 But once the price ascended above $16 and even made an attempt at penetrating the trend-establishing 200-period EMA, the bears came into play and increased the selling pressure, thus keeping BNB at bay. Right now, Binance Coin is literally squeezed between the 50 EMA and the 200 EMA, in a range that is getting tighter.

Moreover, the price is also gridlocked between the Fibonacci retracement levels 0.382 and 0.5, which adds extra resilience to that particular area of resistance. The bulls, on the other hand, appear to be loosening their grip on this market as the initial active buying volume, displayed right after the collapse, has been decreasing gradually over the past two months. Since the beginning of May, sellers have been reclaiming the initiative, which translated into a visible stagnation in price development.

Many traders placed their hopes on Bitcoin halving to serve as a catalyst for Binance Coin in its strive to repair the damage done by the flash-crash, but it has come and gone while the price remained stuck. The latest minor uptrend had crashed into the concrete ceiling in the form of the 200 EMA and broken its structure by establishing two lower highs. In doing so, BNB reversed to the descending triangle, a bearish pattern that usually gets resolved to the downside. The turn of Bollinger Bands from a rising to a flat position signifies the cancelation of the uptrend and transition to the consolidation phase that could end up in a dive.

According to our estimates, BNB traders must prepare themselves for range trading or wait for the resolution of the descending triangle. There is also a 15% probability that Binance Coin would defy the overall stagnation/bearish agenda and erupt to the upside, although that impulse would take the price no higher than $21, the point which constitutes the crossing between the horizontal resistance from the past six months and the major downtrend resistance. The breakage of this firm resistance, with the subsequent initiation of a fully-fledged uptrend, is very unlikely given the uncertainty of the situation in the global economy and cryptocurrency market, by association.

Taking into account all of the factors mentioned above, we conclude that throughout the next week, Binance Coin will be ranging with a risk of going to the downside, to the area around $13. Therefore, BNB is ripe for shorting, with the price target set at the 0.236 Fibo level or $13.6.