Binance, as the organization, has been all over the news lately for two major reasons: the first being the acquisition of CoinMarketCap, arguably the most popular aggregator of crypto-related data, and the involvement in the class-action lawsuit that has to do with the non-compliance with the US state and securities legislation during the ICOs that took place over the last few years.

News as the driver of BNB price

The lawsuit had been filed not only against Binance but also a number of other cryptocurrency exchange platforms - the negative outcome of that case could result in organizations paying billions of dollars in fines, which would have a disastrous effect on the price of Binance Coin, by association. However, it might take years for this lawsuit to be settled, but the negativity that it generated could fuel the bearish pressure that is amounting after a week of continuous price growth on the back of another news regarding the purchase of CoinMarketCap, presumably for $400 million.

This deal comes as a part of the explosive growth of Binance infrastructure, which now includes the P2P trading in a number of national currencies, the issuance of the proprietary Visa credit card, and the introduction of perpetual futures as a trading option.

All in all, the Binance organization is relentless in its strive to create an ecosystem that would dominate the crypto space. These efforts had a visible effect on the price of Binance Coin - during the previous month, it soared upward by 25% against USD, 5.3% - BTC, and 7.5% - ETH. The news regarding the CoinMarketCap acquisition, which emerged on April 2, forced the price to rise by 22.4% in five days. But that attractive bull rally seems to be running its course due to the emergence of a factor of global importance that could once again send the price of BNB tumbling.

A major disaster in the US could provoke another panic sell

Just a few days ago, the media outlets were filled with optimistic messages about the suppression of COVID-19 pandemic in a number of Western countries. These largely positive reports, along with the signing into action of the $2 trillion relief package for the US financial sector, sparked bullish sentiments in both traditional and cryptocurrency markets, incentivizing the biggest upward run since the Coronavirus Crash.

This optimism, however, was short-lived because, on April 12, Donald Trump approved a major disaster declaration that encompasses all 50 states - the first such act in the history of the US. There is hardly any doubt that it will cause another massive sell-off in stock markets, which will extend to the crypto market and BNB. 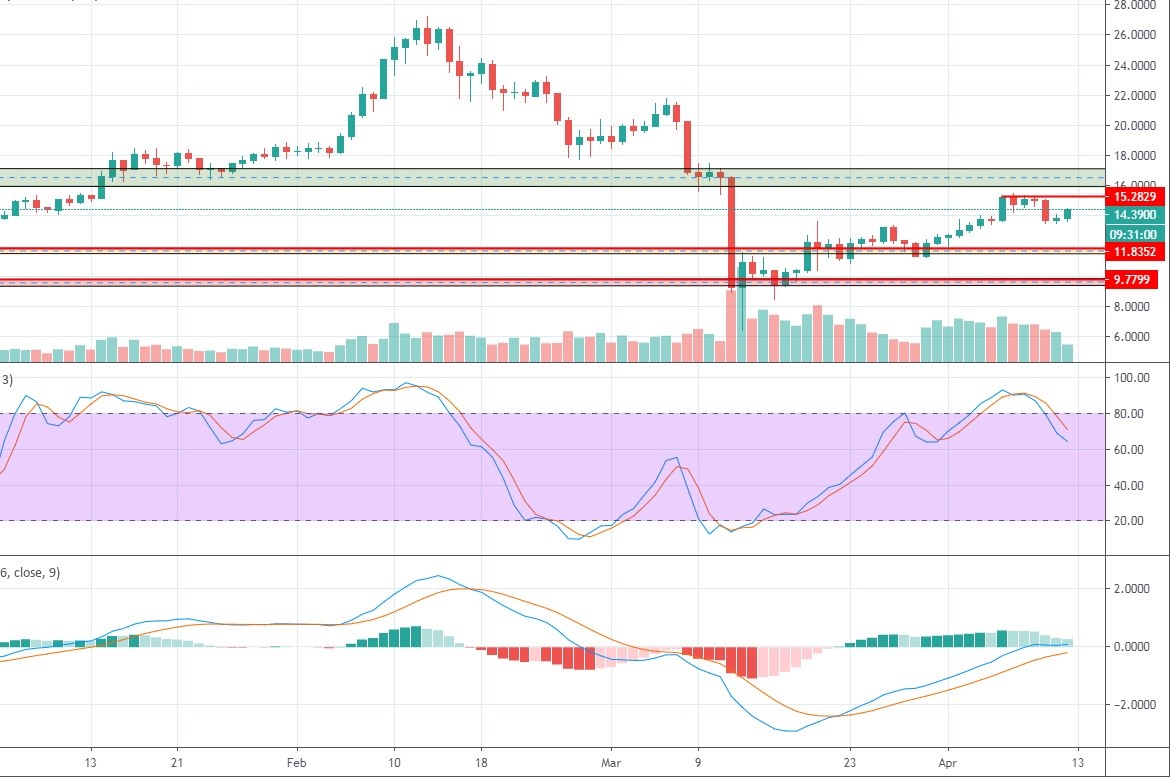 Binance Coin still has a day before the market opens on April 13 to make a sprint to the $16 level, which is also a strong historical resistance, and allow traders to acquire a better shorting position, but it is most likely that the price won’t be able to surpass the established resistance at $15.2. Technical indicators are pointing at the imminent price depreciation: Stochastic is already heading south after making a crossover in the overbought area; the MACD line got firmly rejected at zero and is likely to cross under a bit later.

We have established two price zones: $11.8 and $9.7, where BNB might find support during the next week’s downfall. Both these levels constitute the historical resistance that should keep the price from going under.