The cryptocurrency market is currently going through a bull run which has lasted over the entire weekend, and it is still allowing multiple coins to trade in the green. A lot of coins took the opportunity to break some of their strongest resistance levels, and Binance Coin (BNB) is definitely among them.

The coin currently sits at the 8th spot on the list of largest cryptos by market cap, with a current market cap of $3.08 billion and a price of $19.85 at the time of writing. In the past 24 hours, its price grew by 4.26% against the USD, and 1.13% against BTC, making BNB more than a decent performer. Its trading volume in the last 24 hours increased as well, reaching $369.6 million. But, to know what lies in the coin's future, we should first check out its past.

As you likely know, BNB was launched back in late July 2017, as a native cryptocurrency for one of the world's largest exchanges, Binance. However, despite the fact that the coin was launched in the middle of the crypto craze, when prices were soaring left and right, this was not when it reached its ATH.

BNB did experience a major price surge before the bear market of 2018 hit, even reaching its ATH at the time ($24.46). When the crypto winter started, the coin dropped just like any other, although its drop was pretty mild when compared to others. BNB fell by a bit over 50%, where most others lost well over 80% or even 90% of their prices.

BNB remained at the support level at $10 for several months, even managing to grow and almost reach $17 on more than one occasion. As the year progressed, however, its price started dropping again, and by September, it got stuck to $10. Then, the second market crash caused by a BCH hard fork in November forced it to finally break this support and go below it, eventually hitting its new bottom at $5.

This is where things took a major turn for BNB, which happened as 2019 started. As we know now, this year saw a series of bull runs between April 1st and the second half of June, but BNB did not wait for the bull runs to arrive. Binance started launching its fiat-to-crypto exchanges, it brought back its Binance Launchpad, and it launched its own blockchain and DEX, all of which brought huge attention to BNB. 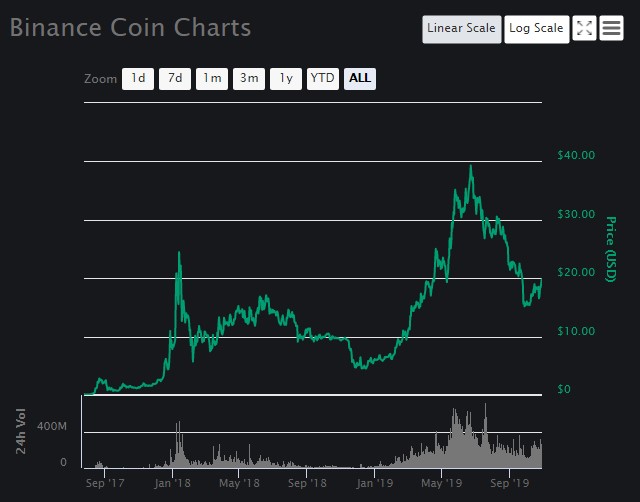 The coin started surging almost as soon as January had started, which led to its ATH of $39.30, as the coin was priced on June 22nd. During these six and a half months, the coin decoupled from BTC, although it was still affected by the positive market behavior.

However, as June approached its end, the bull runs ended, and correction took place. This correction took BNB past several supports, and while all major ones tried to stop its drop — and succeeded for a couple of days each — BNB eventually broke them all. The coin found its new support level at $16, which held it from going further down.

It also held it long enough for BNB to start growing once more, and in the past several days, it climbed past $20 once more. Currently, it is just below this level, proving that it will still act as a resistance, even though it was briefly breached.

What to expect in the future?

BNB future remains uncertain. The coin had definitely shown its ability to grow, even during the periods when most other coins were not even thinking about bull runs. However, its growth was also impacted by the hype regarding Binance, and as soon as it ended, BNB fell back into the ranks of cryptos whose price performance is decided by Bitcoin.

Will BNB go its own way again, in the future? Maybe. For now, however, it seems to be performing as the rest of the market does, meaning that the overall market sentiment will dictate its future, as well as the future of most other cryptocurrencies.