When it comes to fundamentals, Ontology is probably one of the finest cryptocurrencies out of the Coinmarketcap’s Top 30. The team behind ONT created a state-of-the-art blockchain solution that could become indispensable for identity security and data management in the years to come.

However, the price of Ontology, which is our main point of interest, doesn’t rely solely on fundamentals, though there is no denying the fact that this particular component could drive the value of that coin higher in the mid-to-long term. The coin emerged in the cryptocurrency market in March 2018, right when the notorious bear market was beginning to take its toll on portfolios of cryptocurrency holders. In about a month and a half, ONT had skyrocketed from its initial price of $1.42 to the all-time high of $10.02 and then entered the period of correction that still lasts.

2019 was far from being a fruitful year for this cryptocurrency that showed only 5% gains against the US Dollar, while remained in the red against other popular cryptocurrencies. For instance, the drop in value in the ONT/BTC pair amounted to -55%, though over the past 30 days, the 28th cryptocurrency outmatched Bitcoin by 2%, an achievement that is likely to be negated once BTC confirms the trend reversal or even breaks the resistance at $9000 once again. But over the same period of time, Ontology displayed 18% gains against USD and USDT; therefore, if you are interested in trading this cryptocurrency, it would be better to focus your efforts on this particular pair.

Struggling to reverse a trend

Ontology is not the kind of cryptocurrency that boasts high trading volume: $87 million worth of daily trading activities happening across all exchanges, with MXC and LATOKEN being the most hospitable towards this coin, accommodating 21% and 18% of the overall trading volume, respectively.

Therefore, there’s no practical point in reviewing the price action on small time frames since the developments there are somewhat slow. The weekly time frame shows that after an inevitable crash, Ontology has been literally laying at the bottom, not being able to even approach the resistance level at $2. 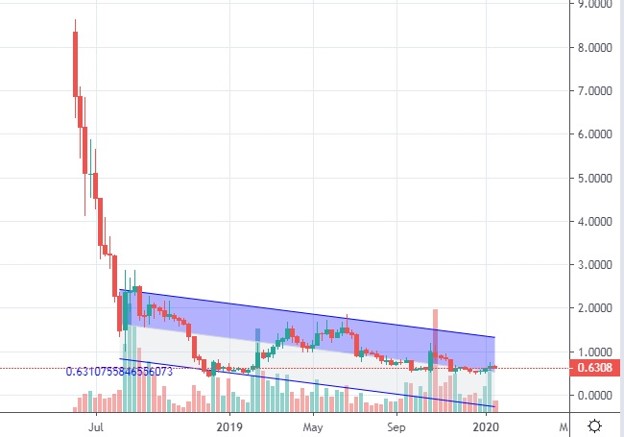 A short impulse to $1, which occurred at the end of last October, wasn’t sufficient for the price to break to the upside, so now, the coin continues moving inside the descending corridor.

A daily chart, though, displays much higher volatility, but still no signs of a trend reversal. The last attempt at a breakout happened last October, but it turned out to be a “fake out” because, after the initial pump, the price had retraced back to $0.49, the level that preceded the last year’s bull run.

In general, the price of ONT was moving within the perfectly-shaped ascending triangle and has now approached the point of breakthrough, though it is quite possible that it will test the established support at $0.48.

There’s no point in denying the probability that ONT could go below the said support, but the scenario of it breaking a triangle is more likely, and can occur in the next week or two, if the coin persists making higher lows. However, one shouldn’t expect very high gains from Ontology, at least not in the short run - 12% to 17% is the absolute maximum that this coin can achieve within the next month.