Ontology (ONT) has been considerably bullish during the past two weeks, although it couldn’t circumvent a significant dump that took place across the entire cryptocurrency market in the first days of September. That dump took 40% of ONT’s value in a single bite and greatly undermined the altcoin’s ability to travel the upside. 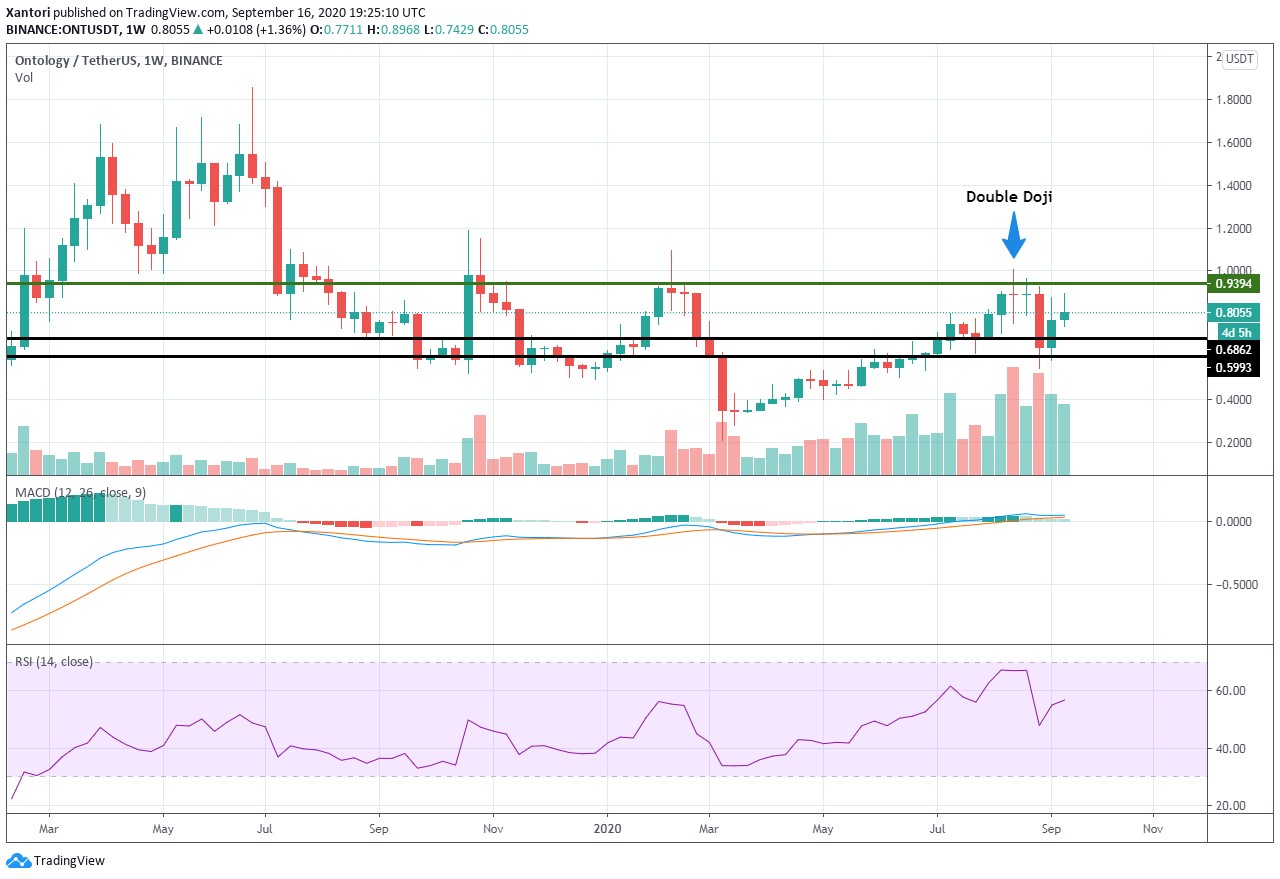 Ontology finds itself in the tightening range

Although a knowledgeable trader should have anticipated that move since the price drew the double doji pattern on the weekly time frame immediately after breaking the resistance at $0.85 to the upside, ultimately failing to establish a new higher high against the one at $1.08 that was reached on February 10 at the top of the bull rally. In doing so, Ontology has failed to meet the expectation of traders who wanted to see at least a hint at the reversal of the downtrend that lingers since August 2018. 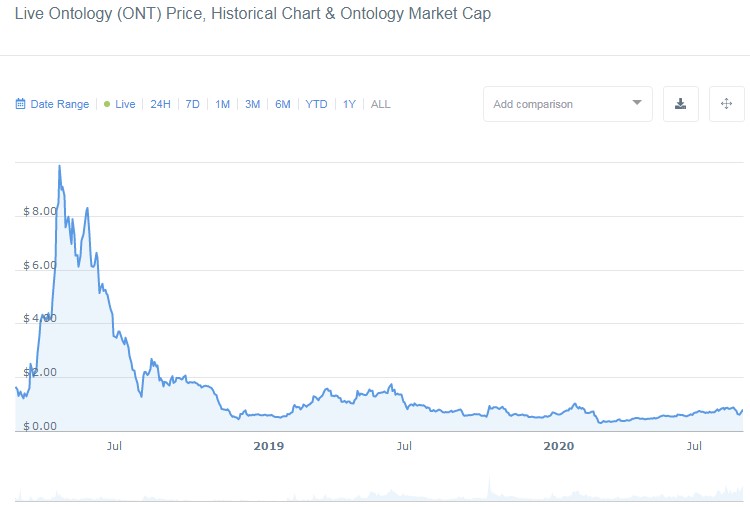 The chart above is illustrative of the inherent weakness of ONT on the macro scale since even now, in the midst of another altseason, the coin that supports the blockchain solution for distributed digital identity and data exchange doesn’t have enough vigor to overcome the resistance at $1, whereas the main barrier between the bearish and the bullish zones in that market lies at $2, not to mention that the all-time high remains at the currently unattainable distance - 93% away at $11,38, while its all-time ROI has fallen to -63%.

Therefore, the preliminary ONT price prediction is that this currency has virtually no chance of seeing explosive growth in the mid-term future due to the overall depression that this market has been experiencing for more than two years. All in all, investing long-term in Ontology would be risky and unjustified, unless you are a die-hard fan of this altcoin.

But Ontology does offer decent opportunities for money-making on the smaller time frames, where the price action has its bullish moments, thanks to the respectable average trading volume of $400 million, seen during the last couple of weeks.

We see it on the daily time frame where ONT got clocked on the head by the bears after failing to go past the resistance at $0.93 - $1 despite several attempts, which served as a clear sign that the buyers have run out of puff. 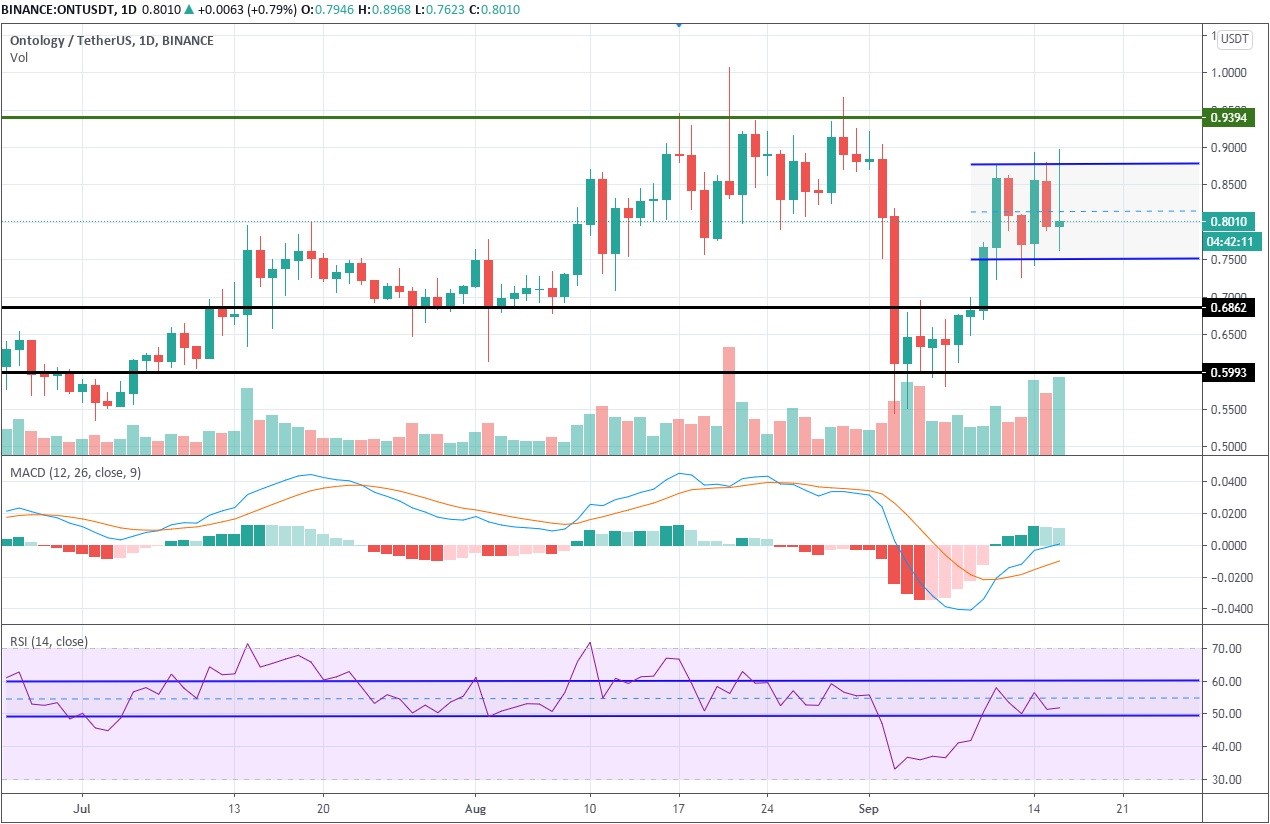 Nevertheless, after the nosedive to $0.6, Ontology established a foothold and initiated an almost immediate recovery that allowed the price to climb back to $0.9.

Right now, the price is locked in the narrow corridor between $0.75 and $0.87 that is likely to determine the course of price action during the next five to ten days. MACD is on the rise after sloping down to the oversold extreme, which allowed the buyers to perform the first stage of recovery. But now, it is running into the danger of being rejected at the zero line that would entail another drop, presumably to the support at $0.68.

RSI finds itself in the neutral zone between 50 and 60 that has been the indicator’s favorite spot during the current cycle, which confirms the notion that ONT is going to be locked in the range, so don’t expect any radical moves, especially to the upside, from this altcoin for a while.