Ontology couldn’t escape the fate of the entire cryptocurrency market that saw the biggest one-day downfall in its history, which caught many traders by surprise since they weren’t expecting such a sharp drop to occur in an extremely short period of time.

A 50% price decline that ONT has suffered during those two grim days liquidated a plethora of stop-losses and left traders wondering what they should do in this new reality, formed by the exponentially growing global economic crisis that is also expedited by the spread of coronavirus. The bull market of January-February is already a distant memory - traders’ only concern now is which approach to undertake in this situation of total uncertainty and merciless sell pressure applied by the bears.

The altseason fairytale has had a gruesome finale in which the coin has fallen from the height of $1.1 to the all-time low at $0.23 - an 82% decline - in just over three weeks. Certainly, even the most renowned trading gurus couldn’t have anticipated this massacre, but the foresighted ones must have offloaded Ontology from their portfolios right at the time when the price had breached the 200-period moving average to the downside - which occurred on February 25, with the price still being at $0.08 - or when they saw death cross forming on the 4-hour time frame.

Although judging from the trading volume registered at that time, the large part of traders decided to stick with Ontology, hoping for a bounce which did happen but only in a totally opposite direction.

But even those who had locked the profits at the very ripe moment weren’t rushing to buy back the coins even when it had hit the all-time low, at least judging from the apparent weakness of the bounce that took place after the crash. 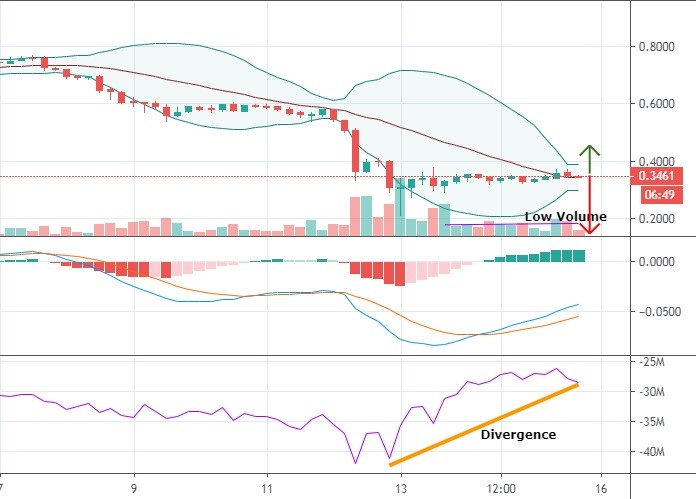 As of the time of writing, Ontology has recovered by no more than 40%, from $0.21 to the present $0.34 and has entered the stage of consolidation that is going to run its course rather soon, given that the price is entering another tight Bollinger Bands squeeze on the 4-hour time frame, which predicts the approaching high volatility.

Whereas no one doubts the bearishness of the current market, there are some signs that Ontology’s next move could be to the upside.

Firstly, we see the bullish crossover, plus divergence, demonstrated by MACD, both lines of which have finally begun to move northward, with green histograms steadily increasing.
Secondly, the Accumulation/Distribution indicator displays an even greater bullish divergence since it made higher highs while the actual price remained flat.

Nevertheless, the trading volume associated with the ongoing consolidation is far too low to catapult the price to at least a half-distance to the pre-crash level, so the most probable price target would be between $0.4 and $0.45, unless there’s another instance of panic sell on the market. In that case, Ontology would dive way under its all-time low and, hopefully, find resistance at $0.1.

All in all, even though the situation is dire, there are enough opportunities to make money even in this kind of market - when it comes to Ontology, the recommended tactics would be to catch the upswing and then wait for the price to form the obvious bottom.