Ontology is a direct rival of Ethereum in the sense that it also represents a platform that provides means for creating decentralized applications, and the team behind the project is working on incorporating the sharding technology in the near future as part of the grand system upgrade. In 2020, Ontology plans the introduction of the cross-chain feature. By now, the project has achieved certain progress in that regard, having already launched the update called Wasm and reached the network throughput of 5,000 transactions-per-second.

Even though the work is being done and some degree of success has been acquired, the currency that fuels the ecosystem hasn't been doing well with regards to its value, especially compared to the rival Ethereum. 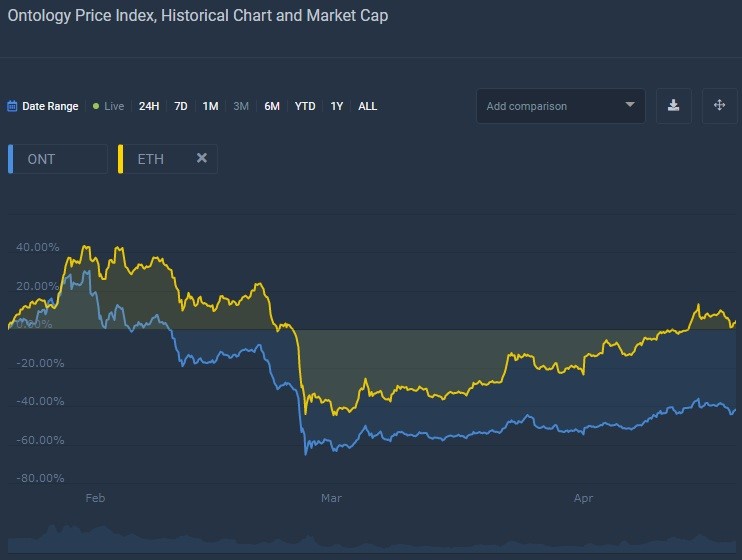 Whereas there is a visible correlation in the price movement, ETH is making far greater gains than its counterpart - in the last 30 days, the brainchild of Vitalik Buterin outperformed Ontology by 14% and has already fully recuperated after the events of the Black Thursday. ONT, on the other hand, appears to be reluctant to make its way past the same price levels, although it does travel northwards at a slow pace.

The sellers have this market under their thumbs

When looking at the weekly time frame, it becomes obvious that ONT has absolutely no intention to try and reverse the two-year-long macro downtrend. The bears are having such a firm hold here that the price is currently in the lowest zone in its entire existence. Upon collapsing to $0.224 - the all-time low - Ontology pushed away from the bottom, but the presence of buyers in this market is so low that the coin still can't rise above the surface that once was the lowest-ever support level at $0.52.

Another worrying factor for the bullishly-minded ONT traders is the predominance of bearish trading volume established since the beginning of February. The bullish volume that emerged after the market crash was, for the most part, lower than the preceding and the existing bearish one, which means that buyers don't have enough strength to breach the resistance, not to mention the downward trend. Moreover, as the price action progresses, it gives more hints at the formation of the bearish flag that is highly likely to find resolution to the downside. Once it does so, the Ontology price prediction would become way more complicated because it would fall beneath the all-time low to the uncharted territory. It is our presumption that ONT won't go below $0.12 at the first bearish swing - in the mid-to-long term, the price is likely to consolidate around $0.1 in anticipation of influential buyers.

In dire situation against Bitcoin

Ontology's prime time in a pairing with Bitcoin fell on the tail end of April when the price of ONT rallied to 6,400 satoshis only to fall off the cliff and hit the bottom at 5,350 satoshis, the present all-time low.

Taking into account that BTC enjoys the pre-halving rally, it is not hard to predict that Ontology will go in the opposite direction, first crashing through 5,000 sats and gradually descending to 4,000 sats, where it could begin to consolidate.